The Vatican City, one of the most sacred places in Christendom, attests to a great history and a formidable spiritual venture. A unique collection of artistic and architectural masterpieces lie within the boundaries of this small state. At its centre is St Peter's Basilica, with its double colonnade and a circular piazza in front and bordered by palaces and gardens. The basilica, erected over the tomb of St Peter the Apostle, is the largest religious building in the world, the fruit of the combined genius of Bramante, Raphael, Michelangelo, Bernini and Maderno. 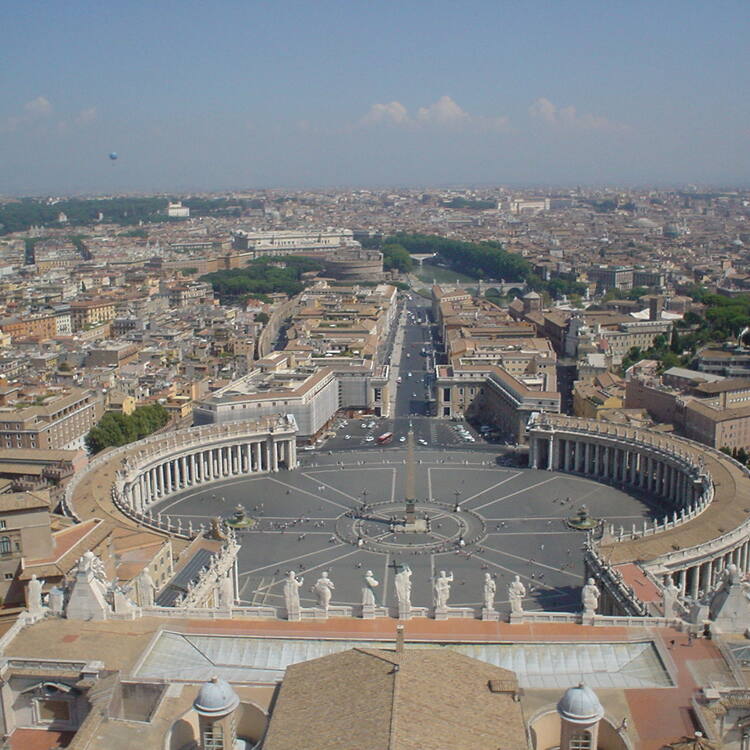 One of the most sacred places in Christendom, Vatican City stands as a testimony to a history of about two millennia and to a formidable spiritual venture. Site of the tomb of the Apostle Saint Peter, first of the uninterrupted succession of Roman Pontiffs, and therefore a main pilgrimage centre, the Vatican is directly and tangibly linked with the history of Christianity. Furthermore, it is both an ideal and an exemplary creation of the Renaissance and of Baroque art. It exerted an enduring influence on the development of the arts from the 16th century.

The independent State, defined by the Lateran Treaty of 11 February 1929, extends its territorial sovereignty over an area of 44 ha in the centre of Rome: Vatican City enclosed by its walls and open toward the city through Bernini’s colonnade of Saint Peter’s. The boundaries of the city-state contain masterpieces and living institutions that are a witness to the unique continuity of the crucial role played by this place in the history of mankind. The Centre of Christianity since the foundation of Saint Peter’s Basilica by Constantine (4th century), and at a later stage the permanent seat of the Popes, the Vatican is at once the pre-eminently holy city for Catholics, an important archaeological site of the Roman world and one of the major cultural reference points of both Christians and non-Christians.

Its prestigious history explains the development of an architectural and artistic ensemble of exceptional value. Beneath the basilica of Saint Peter, reconstructed in the 16th century under the guidance of the most brilliant architects of the Renaissance, remains of the first basilica founded by Constantine still exist, as well as ruins of the circus of Caligula and Nero, and a Roman necropolis of the 1st century AD, where Saint Peter’s tomb is located. Under Julius II’s patronage in 1506, an extraordinary artistic era was inaugurated, leading to the decoration of Raphael’s Stanze and of the Sistine Chapel with frescoes by Michelangelo, along with the building of the new basilica, completed in 1626, fruit of the combined genius of Bramante, Raphael, Michelangelo, Bernini, Maderno and Della Porta.

The Vatican Palace is the result of a long series of additions and modifications by which, from the Middle Ages, the Popes rivalled each other in magnificence. The original building of Nicholas III (1277-1280) was enlarged in the 15th, 16th and 17th centuries: the history of the arts of the Renaissance and Baroque periods finds here iconic models.

In 1475, Sixtus IV founded the Vatican Library, which is the first open to the public in Europe; the collections of manuscripts and books, prints, drawings, coins and decorative arts, constantly increased through the centuries, making it an invaluable repository of human culture.

From the mid-18th century, the popes’ efforts were also directed towards expanding the private collections of antiquities dating back to the Renaissance: their transformation into public museums accessible to scholars and connoisseurs marks the origin of the Vatican Museums. New buildings were built specifically to house the classical sculptures, such as the Pio-Clementine Museum, which represents a milestone in the history of European culture. The 19th- and 20th-century additions of new and diverse collections and buildings accord with the tradition of papal patronage.

Criterion (i): The Vatican, a continuous artistic creation whose progress spreads over centuries, represents a unique masterpiece of the modelling of a space, integrating creations which are among the most renowned of mankind: not only the world famous icon of sacred architecture, the basilica of Saint Peter, but also the chapel of Nicholas V decorated by Fra Angelico, the Borgia apartment with frescoes by Pinturicchio, the Stanze of Raphael and his students, the Sistine Chapel, whose mural decoration, begun by Perugino, Botticelli and other painters, was completed in the 16th century with the frescoes of the ceiling and the monumental Last Judgement by Michelangelo, who left his last murals in the Pauline Chapel.

Criterion (ii): The Vatican exerted a deep influence on the development of art from the 16th century. Architects have visited it to study the constructions of Bramante (the Basilica of Saint Peter, the Belvedere Court), of Michelangelo (the cupola of Saint Peter), of Bernini (Saint Peter's colonnade, the Baldacchino of the Basilica). Both within and outside Europe, the Vatican buildings have been abundantly copied and imitated, the paintings (the frescoes of Raphael and Michelangelo) and the antiquities of the Museums no less so.

Criterion (iv): The Vatican is both an ideal and exemplary religious and palatial creation of the Renaissance and of Baroque art.

Criterion (vi): Site of the tomb of Saint Peter and pilgrimage centre, the Vatican is directly and materially linked with the history of Christianity. For more than a thousand years, mankind has accumulated, in this privileged site, the treasures of its collective memory (manuscripts and books of the Library) and of its universal genius.

The boundaries of the property, which coincide with the entire territory of the Vatican City State, have preserved their original integrity and characteristics. The exceptional urban, architectural and aesthetic values, even through successive additions and changes in form and design, invariably maintain the highest standards of artistic quality and workmanship, building an organic ensemble of unparalleled harmony. Civil and sacred buildings, which have been in use for centuries, maintain their religious, cultural, institutional and diplomatic functions unaltered.

The property meets the required conditions of authenticity, since most of its features are still preserved and maintained in their initial form, perform their primary functions and truthfully convey their original spiritual and cultural values. The extensive restoration campaigns conducted on some of the most significant monuments of the site since the date of the inscription ensure the material conservation of the heritage and strengthen its capacity for expressing its values.

The property is safeguarded by the law for the protection of the cultural heritage (no. 355, 25/07/2001) and by several ­rules of procedure issued by the various institutions of the Holy See in charge of heritage. For instance, the body responsible for the preservation and maintenance of Saint Peter’s Basilica, the Fabbrica di S.Pietro, was founded in 1506 and is still active. The legal protective mechanism and traditional management system are adequate and ensure the effective protection of the site. The state of conservation of the property is constantly and carefully monitored, with special attention paid to the impact of the huge number of pilgrims and visitors.