The Convent of St Gall, a perfect example of a great Carolingian monastery, was, from the 8th century to its secularization in 1805, one of the most important in Europe. Its library is one of the richest and oldest in the world and contains precious manuscripts such as the earliest-known architectural plan drawn on parchment. From 1755 to 1768, the conventual area was rebuilt in Baroque style. The cathedral and the library are the main features of this remarkable architectural complex, reflecting 12 centuries of continuous activity. 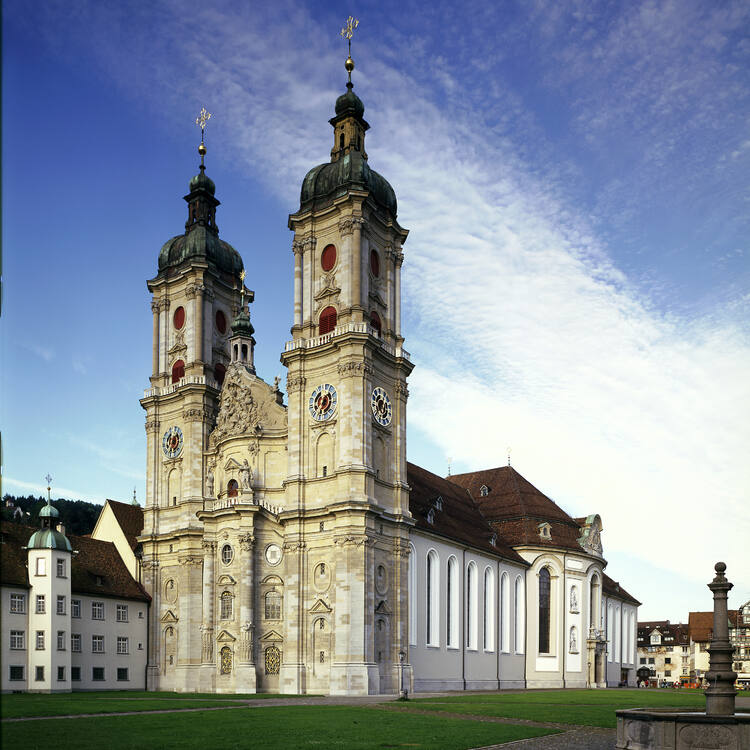 The Abbey of St Gall is located in the town of St Gall in the north-eastern part of Switzerland, and largely owes its present appearance to the construction campaigns of the 18th century. It is an impressive architectural ensemble comprising different buildings regrouped around the main square of the abbey: The west side includes the ancient abbatial church (the present cathedral), flanked by two towers and the ancient cloister, which today houses the abbatial Library; located on the east side is the “Neue Pfalz”, the present seat of the canton authorities. The northern part of the square is composed of buildings of the 19th century: the ancient arsenal, the Children’s and Guardian Angels’ Chapel and the former Catholic school.

The Abbey of St Gall is an outstanding example of a large Carolingian monastery and was, since the 8th century until its secularisation in 1805, one of the most important cultural centres in Europe. It represents 1200 years of history of monastic architecture and is a typical and outstanding ensemble of a large Benedictine convent. Almost all the important architectural periods, from High Middle Ages to historicism, are represented in an exemplary fashion. Despite the diversity of styles, the conventual ensemble gives the impression of overall unity, bordered on the north and to the west by edifices of the town of St Gall that are, for the most part, intact.

The High Baroque library represents one of the most beautiful examples of its era, and the present cathedral is one of the last monumental constructions of Baroque abbatial churches in the West. In addition to the architectural substance, the inestimable cultural values conserved at the Abbey are of exceptional importance, notably: the Irish manuscripts of the 7th and 8th centuries, the illuminated manuscripts of the St Gall School of the 9th and 11th centuries, documents concerning the history of the origins of Alemannic Switzerland as well as the layout of the convent during the Carolingian era (the only manuscript plan of that time remaining worldwide, conserved in its original state, representing a concept of monastic organisation of the Benedictine order).

Criterion (ii): The Abbey of Gozbert (816-837) exerted a great influence on the development of monastic architecture following the Council of Aix-la-Chapelle, as demonstrated by the famous plan of St Gall of the 9th century which comprises architectural drawings of 341 inscriptions on parchment that may be perceived as the ideal layout for a Benedictine abbey.

Criterion (iv): The Abbey of St Gall may be considered as a typical example of a large Benedictine monastery, centre of art and knowledge, with its rich library and scriptorium. The successive restructurings of the conventual space attest, in their diversity, to an on-going religious and cultural function.

The property comprises the entire monastic ensemble with the archives of the Abbey as well as the Abbatial Library and all the restructuring developments over more than 1200 years, and consequently retains all the necessary elements to express its Outstanding Universal Value.

The property reflects an architectural development spanning several centuries, and bears witness to well-preserved material and original substance, with a continuous religious, cultural and public function.

Federal, cantonal and communal laws protect the Abbey of St Gall. Federal protection is inscribed in the land register of the competent authorities of the Confederation, and approval must be granted for all works foreseen in the perimeter of the property. The 1972 cantonal law on construction lists the elements of the Abbey as monuments for which conservation is of public interest. The 2000-2005 Construction Order for the town of St Gall stipulates that all the elements of the site must be conserved (ban on demolition, protection of the historical substance and the character of the built edifice). Protection of archaeological discoveries is regulated by cantonal law: no archaeological object may be destroyed or exported beyond the canton without authorization of the cantonal authorities responsible for archaeology. With a view to improving the conservation of some objects and manuscripts, the constraints linked to the environment have been reduced by the limitation of traffic in the immediate vicinity, the deposit of manuscripts in a space with regulated temperature and through the continual monitoring of climatic conditions at the site.

The management of the property is jointly ensured by the canton and the town of St Gall as well as the Catholic Church that, for the most part, ensures its funding. In 2012, the most important stakeholders created an association to improve coordination for the management of the property and prepare a management plan. The property should benefit from the reinforced protection according to the Second Protocol relating to the 1954 Hague Convention, which will strengthen the provisions concerning risk management for the conservation of the movable and immovable property.