The List Monastery of the Hieronymites and Tower of ...
Print

Standing at the entrance to Lisbon harbour, the Monastery of the Hieronymites – construction of which began in 1502 – exemplifies Portuguese art at its best. The nearby Tower of Belém, built to commemorate Vasco da Gama's expedition, is a reminder of the great maritime discoveries that laid the foundations of the modern world. 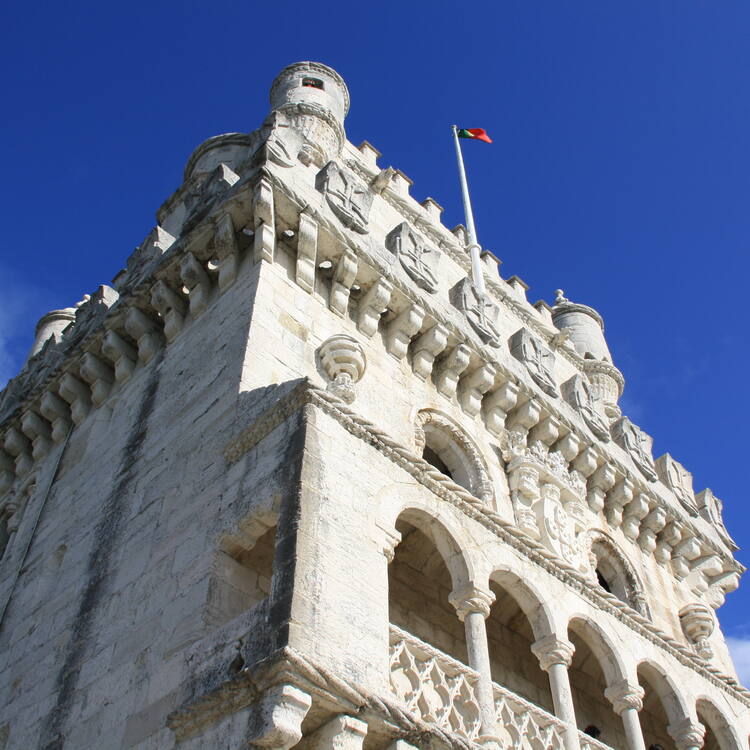 Monastery of the Hieronymites and Tower of Belém in Lisbon (Portugal) © Limes.Media/Tim Schnarr

This serial World Heritage property comprises the Monastery of the Hieronymites and the Tower of Belém, both known as the complex of Belém, located on the shore of the Tagus River at the entrance to the port of Lisbon. The Monastery of the Hieronymites is a royal foundation that dates back to the late 15th century. It was commissioned by King D. Manuel I and donated to the monks of Saint Hieronymus so that they would pray for the King, and pay spiritual assistance to seafarers that left the shores of Lisbon in quest for the new world. The monastery was also built to perpetuate the memory of Prince Henry the Navigator. Its very rich ornamentation derives from the exuberance typical of Manueline art. Being symbolically linked to the Age of Discoveries, the monastery still preserves most of its magnificent structures, including its 16th-century Cloister, the friars’ former Refectory, and the Library.

Not far from the monastery, on the banks of the Tagus River, Francisco de Arruda constructed the famous Tower of Belém around 1514, also known as the Tower of St Vincent, patron of the city of Lisbon, which commemorated the expedition of Vasco da Gama and also served to defend the port of Lisbon. The cross of the Knights of Christ is repeated indefinitely on the parapets of this fortress, while the watch towers that flank it are capped with ribbed cupolas inspired by Islamic architecture.

Created by the royal dynasty of Avis at its height, the complex of Belém is one of the most representative examples of Portuguese power during the Age of Discoveries.

Criterion (iii): The Monastery of the Hieronymites and Tower of Belém are a unique and exceptional testimony to a 15th and 16th-century civilization and culture. They reflect the power, knowledge and courage of the Portuguese people at a time when they consolidated their presence and domain of intercontinental trade routes.

Criterion (vi): The complex of Belém is directly associated with the Golden Age of the Discovery and the pioneer role the Portuguese had in the 15th and 16th centuries in creating contacts, dialogue and interchange among different cultures.

The serial property encompasses 2,66 ha, comprising the complex of Belém that includes the Monastery of the Hieronymites and the Tower of Belém. Despite the changes that both monuments went through over time, they have succeeded in preserving their physical integrity. At the Monastery, the church maintains its religious services as the parish of Santa Maria de Belém.

The Tower of Belém has preserved its original layout, despite the large changes in the surrounding area caused by landfills and by the silting of the river Tagus. The 103 ha buffer zone around the serial property serves to increase the protection of the settings of the two monuments but the wider setting, particularly when viewed from the sea, still warrants additional protection to ensure that the visual characteristics are maintained.

The complex of Belém testifies to Portugal’s cultural apogee in the 16th century and has retained its authenticity in terms of materials, form, and design. Of particular mention is the stone workmanship of the Monastery and Tower, where building materials are those used in the original construction. Restoration projects implemented by national and local organisations have strictly respected original materials and techniques. The properties maintain their predominant position from an urban point of view. Authenticity has also been maintained in terms of location and setting, as there are no major changes to the original plan, materials, social significance and relationship with the urban setting.

The Monastery of the Hieronymites and the Tower of Belém are classified as national monuments by a Decree published in the Government Journal no. 14 of 17 January 1907. In order to ensure enforcement of the Law as the basis for the policy and regulatory system for the protection and enhancement of cultural heritage (Law no. 107 of 8 September 2001), Decree no. 140 of 15 June 2009 established the legal framework for studies, projects, reports, works or interventions carried out for classified cultural assets. It established, as a regulation, the need for a prior and systematic assessment, monitoring and careful analysis of any works that are likely to affect the property’s integrity so as to avoid any disfigurement, dilapidation, loss of physical features or authenticity. This is ensured by appropriate and strict planning, by qualified staff, and by careful supervision of any techniques, methodologies and resources to be used for implementation of interventions on cultural properties.

The key goal of the management arrangements is to preserve the authenticity and integrity of the property as a whole monumental complex through the implementation of a work plan that involves the local community.

All the interventions that have been implemented or are programmed comply with current legislation, as well as with strict technical and scientific criteria. Attention is given to the treatment and rehabilitation of the area surrounding the monuments, as these works are to be ensured by local organisations involving both the municipality and the local community.

Management of the property is ensured by the decentralised services of the Directorate General for Cultural Heritage (DGPC), the national administration department responsible for cultural heritage. Conservation, enhancement and safeguarding measures are ensured by DGPC that is responsible for drawing up an annual programme and implementing it so as to secure the continued future maintenance of the monuments.

The creation of a single protection zone for both monuments as well as the enlargement of the buffer zone have been crucial for the integral protection of the property. However, the wider setting in terms of the important views of the property from the sea will also require careful monitoring and additional protection to ensure that integrity is maintained.

play_arrow Monastery of the Hieronymites and Tower of Belém in ... (UNESCO/NHK)