These 34 monasteries and temples, extending over more than 2 km, were dug side by side in the wall of a high basalt cliff, not far from Aurangabad, in Maharashtra. Ellora, with its uninterrupted sequence of monuments dating from A.D. 600 to 1000, brings the civilization of ancient India to life. Not only is the Ellora complex a unique artistic creation and a technological exploit but, with its sanctuaries devoted to Buddhism, Hinduism and Jainism, it illustrates the spirit of tolerance that was characteristic of ancient India. 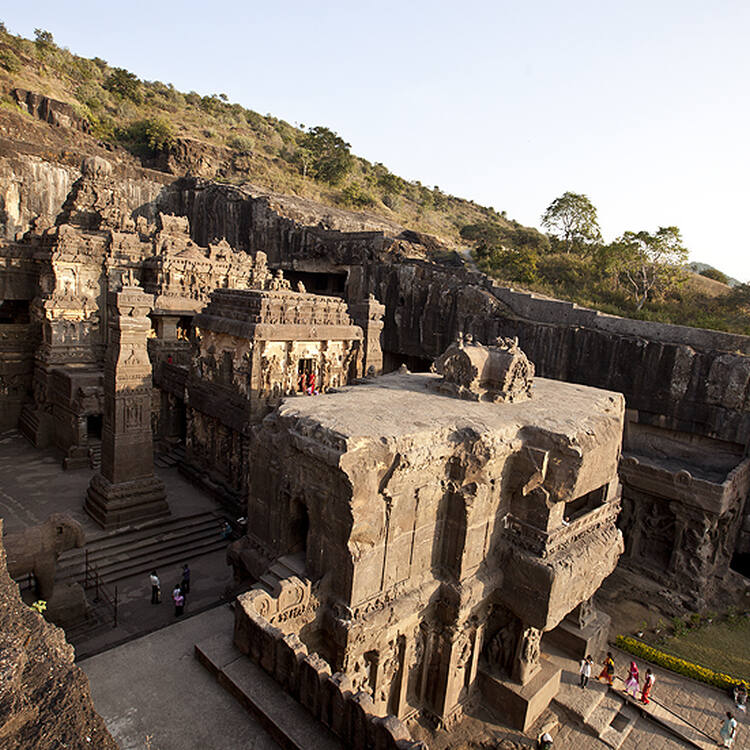 The invaluable ensemble of 34 caves at Ellora in the Charanandri hills of western India’s Maharashtra State showcases a spirit of co-existence and religious tolerance through the outstanding architectural activities carried out by the followers of three prominent religions: Buddhism, Brahmanism, and Jainism. The rock-cut activity was carried out in three phases from the 6th century to the 12th century. The earliest caves (caves 1–12), excavated between the 5th and 8th centuries, reflect the Mahayana philosophy of Buddhism then prevalent in this region. The Brahmanical group of caves (caves 13–29), including the renowned Kailasa temple (cave 16), was excavated between the 7th and 10th centuries. The last phase, between the 9th and 12th centuries, saw the excavation of a group of caves (caves 30–34) reflecting Jaina philosophy.

Amongst the caves of the Buddhist group, Cave 10 (Visvakarma or Sutar-ki-jhopari, the Carpenter’s cave), Cave 11, and Cave 12 (Teen Tal, or three-storied monastery, the largest in this category) are particularly important. These caves mark the development of the Vajrayana form of Buddhism and represent a host of Buddhist deities. The prominent caves of the Brahmanical group are Cave 15 (Dasavatara, or Cave of Ten Incarnations), Cave 16 (Kailasa, the largest monolithic temple), Cave 21 (Ramesvara), and Cave 29 (Dumar Lena). Amongst these, Cave 16 is an excellent example of structural innovation, and marks the culmination of rock-cut architecture in India featuring elaborate workmanship and striking proportions. The temple is decorated with some of the boldest and finest sculptural compositions to be found in India. The sculpture depicting Ravana attempting to lift Mount Kailasa, the abode of Siva, is especially noteworthy. The remains of beautiful paintings belonging to different periods are preserved on the ceilings of the front mandapa (pillared hall) of this temple. The Jaina group of caves (caves 30 – 34) is exquisitely carved with fine, delicate sculptures, and includes fine paintings dedicated to the Digambara sect. Through their art and architecture, the Ellora Caves serve as a window to ancient India, including socio-cultural phenomena, material culture, politics, and lifestyles.

Criterion (i): The ensemble of Ellora is a unique artistic achievement, a masterpiece of human creative genius. If one considers only the work of excavating the rock, a monument such as the Kailasa Temple is a technological exploit without equal. However, this temple, which transposes models from “constructed” architecture, offers an extraordinary repertory of sculpted and painted forms of a very high plastic quality and an encyclopaedic program.

Criterion (iii): Ellora brings to life again the civilization of ancient India with its uninterrupted sequence of monuments from AD 600 to 1000.

Criterion (vi): The Ellora Caves not only bear witness to three great religions, i.e. Buddhism, Brahmanism, and Jainism, they illustrate the spirit of tolerance, characteristic of ancient India, which permitted these three religions to establish their sanctuaries and their communities in a single place, which thus served to reinforce its universal value.

Ellora Caves includes all the elements necessary to express its Outstanding Universal Value, including the architectural and sculptural elements that bear witness to Buddhism, Brahmanism, and Jainism in an uninterrupted sequence of monuments from AD 600 to 1000. The property, which encompasses the ensemble along with its natural setting, is of adequate size to ensure the complete representation of features and processes that convey the property’s significance, and does not suffer from adverse effects of development and/or neglect. Identified potential threats to the integrity of the property include visitor and environmental management, seepage and cracking in the caves, and the capacity of conservation staff at the property.

The authenticity of Ellora Caves is expressed through the architectural forms and designs such as the viharas (monasteries), chaityagriha (sanctuary), and monolithic temples belonging to three different faiths. The materials, locations, and natural setting also play significant roles in determining the authenticity of the property. The Ellora Caves are authentic in terms of the forms and designs, materials and substance, and locations and setting of paintings, rock-cut architecture, sculptures, and unfinished temples of three different faiths, i.e. Buddhism, Brahmanism, and Jainism.

The management of the Ellora Caves is carried out by the Archaeological Survey of India (ASI), while the buffer zones are jointly managed by the ASI, the Forest Department, and the Government of Maharashtra. Various legislation, including the Ancient Monuments and Archaeological Sites and Remains Act (1958) and its Rules (1959), Ancient Monuments and Archaeological Sites and Remains (Amendment and Validation) Act (2010), Forest Act (1927), Forest Conservation Act (1980), Municipal Councils, Nagar Panchayats and Industrial Townships Act, Maharashtra (1965), and Regional and Town Planning Act, Maharashtra (1966), governs the overall administration of the property and its buffer zones. A detailed condition survey of all caves has been undertaken as a part of the Comprehensive Conservation Management Plan and implementation is underway.

Sustaining the Outstanding Universal Value of the property over time will require developing and implementing a framework to address issues such as visitor management as well as environment management; long-term monitoring for seepage and cracking patterns in all the caves; and capacity building of conservation staff at the property, with the objective of ensuring the long-term protection of attributes that sustain the Outstanding Universal Value, integrity and authenticity of the property.