The temples at Khajuraho were built during the Chandella dynasty, which reached its apogee between 950 and 1050. Only about 20 temples remain; they fall into three distinct groups and belong to two different religions – Hinduism and Jainism. They strike a perfect balance between architecture and sculpture. The Temple of Kandariya is decorated with a profusion of sculptures that are among the greatest masterpieces of Indian art. 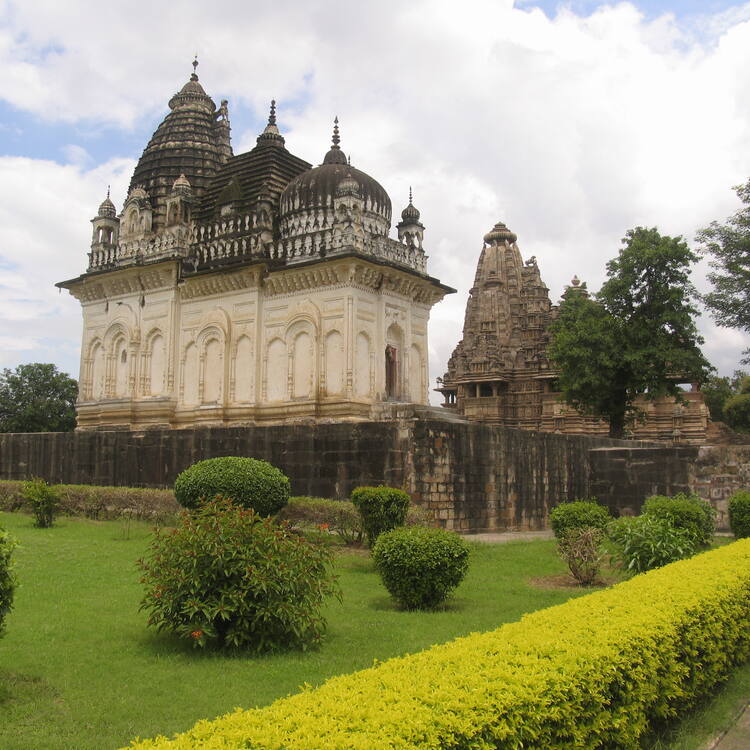 The group of temples of Khajuraho testifies to the culmination of northern Indian temple art and architecture of the Chandella dynasty who ruled the region in the 10th and 11th centuries CE. Distributed over an area of 6 square km in a picturesque landscape, the 23 temples (including one partly excavated structure) that form the western, eastern, and southern clusters of the Khajuraho Group of Monuments are rare surviving examples that display the originality and high quality of Nagara-style temple architecture.

The Khajuraho Group of Monuments demonstrates in layout and physical form, the pinnacle of temple architectural development in northern India. Built in sandstone, each temple is elevated from its environs by a highly ornate terraced platform, or jagati, on which stands the body, or jangha, whose sanctum is topped by a tower, or shikhara, of a type unique to Nagara, where the verticality of the principal spire atop the sanctum is accentuated by a series of miniature spires flanking it, each symbolizing Mount Kailasa, the abode of the Gods.

The plan of the temples shows the spatial hierarchy of axially aligned interconnected spaces. The temples are entered through an ornate entrance porch (ardhamandapa), which leads to the main hall (mandapa), through which one accesses the vestibule (antarala) before reaching the sanctum (garbhagriha). The main halls of the temples were often accompanied by lateral transepts with projecting windows as well as a circumambulatory path around the sanctum. Larger temples had an additional pair of transepts and were accompanied by subsidiary shrines on the four corners of its jagati.

The temples of Khajuraho are known for the harmonious integration of sculptures with their architecture. All surfaces are profusely carved with anthropomorphic and non-anthropomorphic motifs depicting sacred and secular themes. Sculptures depicting acts of worship, clan and minor deities, and couples in union, all reflect the sacred belief system. Other themes mirror social life through depictions of domestic scenes, teachers and disciples, dancers and musicians, and amorous couples. The composition and finesse achieved by the master craftsmen give the stone surfaces of the Khajuraho temples a rare vibrancy and sensitivity to the warmth of human emotions.

Criterion (i): The complex of Khajuraho represents a unique artistic creation, as much for its highly original architecture as for the high-quality sculpted décor made up of a mythological repertory of numerous scenes of amusements that includes scenes susceptible to various interpretations, sacred or profane.

Criterion (iii): The temples of Khajuraho bear an exceptional testimony to the Chandella culture, which flourished in central India before the establishment of the Delhi Sultanate at the beginning of the 13th century CE.

Khajuraho Group of Monuments includes all the elements necessary to express its Outstanding Universal Value, including 23 temples that together demonstrate the originality and high quality attained in northern Indian Nagara-style temple architecture. The property is of adequate size to ensure the complete representation of the features and processes that convey the property’s significance, and does not suffer from adverse effects of development and/or neglect.

To safeguard the temples within their landscape setting, the western, eastern, and southern clusters are each fenced, thus delineating the protected limits. This curbs the spill-over of settlements that once comprised a part of the Chandella Empire. Identified potential threats to the integrity of the property include the nearby Khajuraho Airport, in the form of possible vibrations, increased volume of dust particles, etc.

The property is fully authentic in terms of its location and setting, forms and designs, and materials and substance. Its historic location has not changed. The forms, designs, and materials authentically illustrate the elements of the mature form of northern Indian temple architecture, including a combination of saptaratha plan topped by a form of shikhara unique to the Nagara style. Set in a picturesque landscape, these temples show the celebration of Chandella culture and power.

Khajuraho Group of Monuments is owned by the Government of India and managed by the Archaeological Survey of India through the Ancient Monuments and Archaeological Sites and Remains (AMASR) Act (1958) and its Rules (1959), amendment (1992), and Amendment and Validation Act (2010). The AMASR Acts also delineate prohibited and regulated areas extending 100 m and 200 m respectively from the designated monument. The land abutting the monuments is managed jointly by the Revenue official (i.e., District Collector, State government of Madhya Pradesh) and the Archaeological Survey of India, with the latter responsible for final approvals. In addition to the aforementioned protective designations, the rural landscape is managed by the Nagar panchayat (town-level governance) through the Madhya Pradesh Bhumi Vikas Rules (1984), which can regulate and protect heritage sites. Clause 17 of Section 49 of the Madhya Pradesh Panchayati Rajya Adhiniyam Act (1993) includes a provision for the preservation and maintenance of monuments. The Archaeological Survey of India reviews and strategizes the allocation of resources in consonance with the identified needs. Issues such as interventions, training, research, and outreach are determined annually on the basis of site inspections and assessments. These actions form an integral part of the operational management mechanism, augmented with experts as needed.

Sustaining the Outstanding Universal Value of the property over time will require continuing to protect and control the area immediately surrounding the property and monitoring the situation at the nearby airport to identify and eliminate any negative impacts on the value, integrity or authenticity of the property.