Rila Monastery was founded in the 10th century by St John of Rila, a hermit canonized by the Orthodox Church. His ascetic dwelling and tomb became a holy site and were transformed into a monastic complex which played an important role in the spiritual and social life of medieval Bulgaria. Destroyed by fire at the beginning of the 19th century, the complex was rebuilt between 1834 and 1862. A characteristic example of the Bulgarian Renaissance (18th–19th centuries), the monument symbolizes the awareness of a Slavic cultural identity following centuries of occupation. 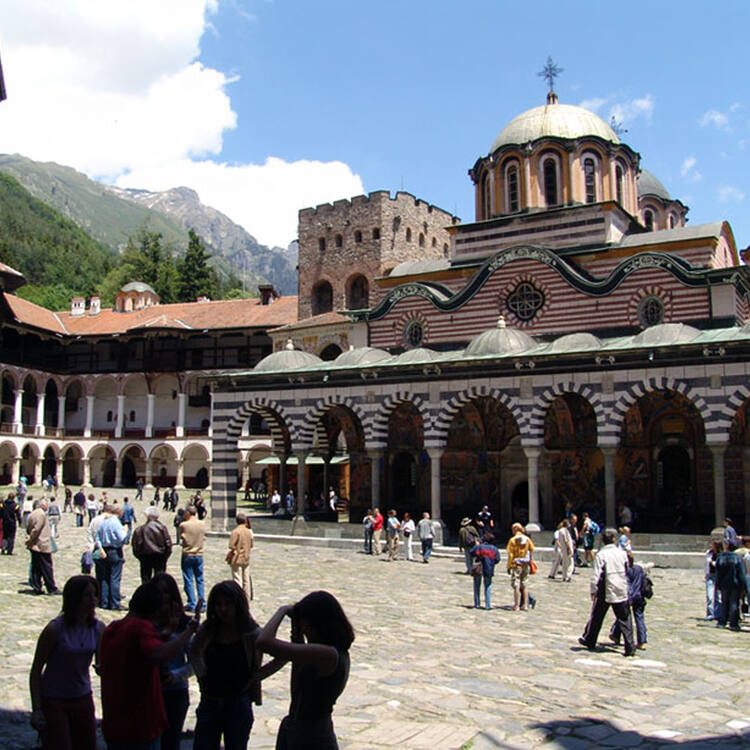 In its complicated ten-century history the Rila monastery has been the hub of a strong spiritual and artistic influence over the Eastern Orthodox world during medieval times (11th-14th c.). Under Ottoman rule (1400-1878) the monastery influenced the development of the culture and the arts of all Christian nations within the Ottoman Empire. With its architecture, frescos etc. it represents a masterpiece of the creative genius of the Bulgarian people.

Architectural styles have been preserved on the property as historical monuments of considerable time span (11th-19th c.). The basic architectural appearance is now one of the peak examples of building craftsmanship of the Balkan peoples from the early 19th c. As such it has exerted considerable influence on architecture and aesthetics within the Balkan area.

Criterion (vi): Rila Monastery is considered a symbol of the 19th Century Bulgarian Renaissance which imparted Slavic values upon Rila in trying to reestablish an uninterrupted historic continuity.

There have been no substantial changes to the integrity of the property since its inscription on the World Heritage List. Planned conservation works, that also involve the medieval and renaissance wood-carving and mural paintings existing in associated churches and chapels of the monastery complex, are being pursued to ensure their proper preservation. Protecting the Monastery from 'force effects' is also of major significance. A series of permanent geological engineering observations are being pursued, with associated report recommendations for "ground-structure" strengthening. Based on these results, other preservation and restoration works will be determined. A development plan is being prepared, and this will propose improvements for the communication and technical infrastructure to assist in preserving the property.

Rila Monastery is the most important spiritual and literary center of the Bulgarian national revival, with an uninterrupted history from the Middle Ages until present times. Reconstruction work was required following a fire, and sections of the monastery, a new church and other structures date to the 18th century. The property fully endorses authenticity requirements regarding location, context, concept, usage, function and tradition, where the spirit and feeling of the site are also properly preserved.

The management is carried out on the basis of:

- Cultural Heritage Law (Official Gazette No 19 of 2009), and the by-law normative act, regulates the research, studying, protection and promotion of the immovable cultural heritage in Bulgaria, and the development of Conservation and Management plans for its inscribed World Heritage List of immovable cultural properties.

- Legislative regimes for the preservation of the site and its buffer zone are in accordance, with a written statement from the 7.05.1992, of a Commission, appointed with an Order № RD-19-132/24.03.1992 of the Ministry of Culture. In addition to regulating the prohibitions, this also identifies allowed activities in the property and its buffer zone, and sets out the responsibilities of the interested parties, including the state, local institutions and owners.

- Management plan of Nature Park "Rila Monastery" has been operational since 2003.

In order to maintain the proper conservation of the monastery, there is a need to implement the development plan of the property.