Timgad lies on the northern slopes of the Aurès mountains and was created ex nihilo as a military colony by the Emperor Trajan in AD 100. With its square enclosure and orthogonal design based on the cardo and decumanus, the two perpendicular routes running through the city, it is an excellent example of Roman town planning. 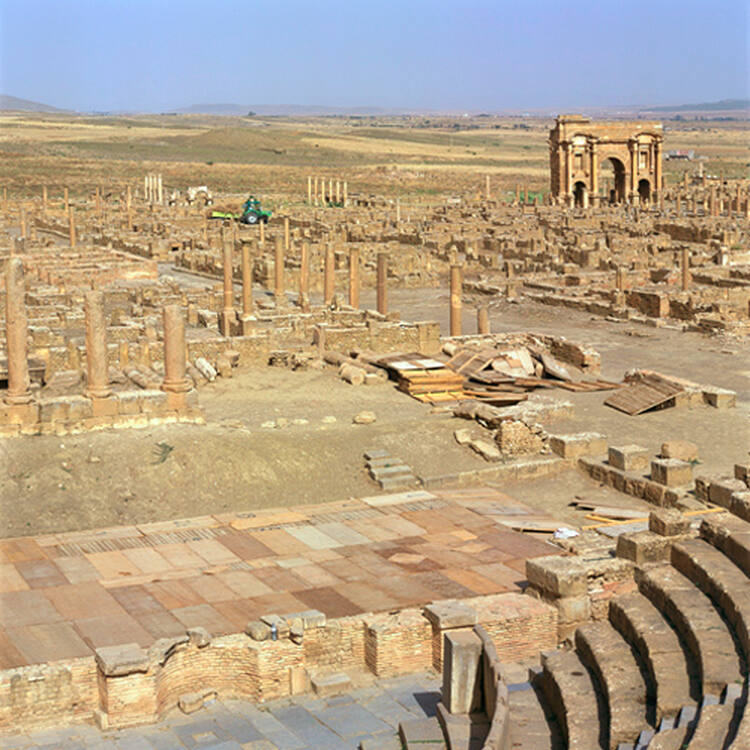 Timgad, located to the north of the massif of the Aurès in a mountainous site of great beauty, 480 km south-east of Algiers and 110 km to the south of Constantine, is a consummate example of a Roman military colony created ex nihilo. The Colonia Marciana Traiana Thamugadi was founded in 100 A.D. by Trajan, probably as an encampment for the 3rd Augustan Legion which, thereafter, was quartered at Lambaesis. Its plan, laid out with great precision, illustrates Roman urban planning at its height. By the middle of the 2nd century, the rapid growth of the city had ruptured the narrow confines of its original foundation. Timgad spread beyond the perimeters of its ramparts and several major public buildings are built in the new quarters: Capitolium, temples, markets and baths. Most of these buildings date from the Severan period when the city enjoyed its Golden Age, also attested by immense private residences.

A strong and prosperous colony, Timgad must have served as a compelling image of the grandeur of Rome on Numidian soil. Buildings, constructed entirely of stone, were frequently restored during the course of the Empire: the Trajan Arch in the middle of the 2nd century, the Eastern gate in 146, and the Western gate under Marcus-Aurelius. The streets were paved with large rectangular limestone slabs and, as attested by the 14 baths which still may be seen today, particular attention was paid to the disposition of public conveniences. The houses, of varying sizes, dazzle by their sumptuous mosaics, which were intended to offset the absence of precious marbles. During the Christian period, Timgad was a renowned bishopric. After the Vandal invasion of 430, Timgad was destroyed at the end of the 5th century by montagnards of the Aurès. The Byzantine Reconquest revived some activities in the city, defended by a fortress built to the south, in 539, reusing blocks removed from Roman monuments. The Arab invasion brought about the final ruin of Thamugadi which ceased to be inhabited after the 8th century.

Criterion (ii): The site of Timgad, with its Roman military camp, its model town-planning and its particular type of civil and military architecture reflects an important interchange of ideas, technologies and traditions exercised by the central power of Rome on the colonisation of the high plains of Antique Algeria.

Criterion (iii): Timgad adopts the guidelines of Roman town-planning governed by a remarkable grid system. Timgad thus constitutes a typical example of an urban model, the permanence of the original plan of the military encampment having governed the development of the site throughout all the ulterior periods and still continues to bear witness to the building inventiveness of the military engineers of the Roman civilization, today disappeared.

Criterion (iv): Timgad possesses a rich architectural inventory comprising numerous and diversified typologies, relating to the different historical stages of its construction: the defensive system, buildings for the public conveniences and spectacles, and a religious complex. Timgad illustrates a living image of Roman colonisation in North Africa over three centuries.

Clarification of the boundaries of the property has been submitted but still requires review. The entire vestiges of the city will be included within the boundary. Moreover, an adequate buffer zone is envisaged.

No intervention has taken place at the property since its inscription on the World Heritage List. Natural phenomena (earthquakes, weather...) have never affected the site, which displays a remarkable stability. The organization of an annual cultural festival has resulted in an influx of visitors, exercising pressure on the conservation of the site due to climbing over and trampling of the fragile structures, and repeated passages of engines and service vehicles on vulnerable structures, graffiti, and the management of uncontrolled rubbish. The Ministry of Culture relocated the activities related to the Annual Festival of Timgad outside the site. This will mitigate the negative impacts on the property. Restoration work executed along with the ongoing excavations has not altered the integrity of the monuments that are, in any case, rendered vulnerable due to the lack of conservation and management operations, and over exploitation.

The ensemble of the vestiges and artefacts excavated bear witness to the Outstanding Universal Value that enabled inscription of the property. The abandonment of the antique site, although at a later period, and the conduct of archaeological excavations almost continually since 1881 to 1960 has enabled the city of Thamugadi to avoid the construction of recent buildings, as the mechanical means required would have disturbed the ancient vestiges.

The Archaeological site of Timgad is governed by a Protection and Presentation Plan (PPMVSA), a legal and technical instrument establishing the conservation and management actions at the property. The body managing the property is the Office of Cultural Properties Management and Exploitation (OGEBC). It executes all activities concerning the protection, maintenance, documenting and development of programmes for presentation and promotion. The OGEBC implements its protection and management programme for the site in cooperation with the Cultural Directorate of the Wilaya (province) that has a service responsible for cultural heritage. The legal and management framework comprises Laws 90-30 (regional law), 98-04 (relating to the protection of cultural heritage), 90-29 (relating to town-planning and development), and the Master Plan for Development and Town-Planning (PDAU) of the Timgad community, 1998. Nevertheless, the State Party considers that there is a need to revise the legal and administrative provisions concerning the property to better ensure its conservation and presentation. There is a need to examine the increasing impact of the insufficient regulation of visitor numbers and vehicles affecting the fragile structures and their surrounds.