The ancient city of Dholavira, the southern centre of the Harappan Civilization, is sited on the arid island of Khadir in the State of Gujarat. Occupied between ca. 3000-1500 BCE, the archaeological site, one of the best preserved urban settlements from the period in Southeast Asia, comprises a fortified city and a cemetery. Two seasonal streams provided water, a scarce resource in the region, to the walled city which comprises a heavily fortified castle and ceremonial ground as well as streets and houses of different proportion quality which testify to a stratified social order. A sophisticated water management system demonstrates the ingenuity of the Dholavira people in their struggle to survive and thrive in a harsh environment. The site includes a large cemetery with cenotaphs of six types testifying to the Harappan’s unique view of death. Bead processing workshops and artifacts of various kinds such as copper, shell, stone, jewellery of semi-precious stones, terracotta, gold, ivory and other materials have been found during archaeological excavations of the site, exhibiting the culture’s artistic and technological achievements. Evidence for inter-regional trade with other Harappan cities, as well as with cities in the Mesopotamia region and the Oman peninsula have also been discovered. 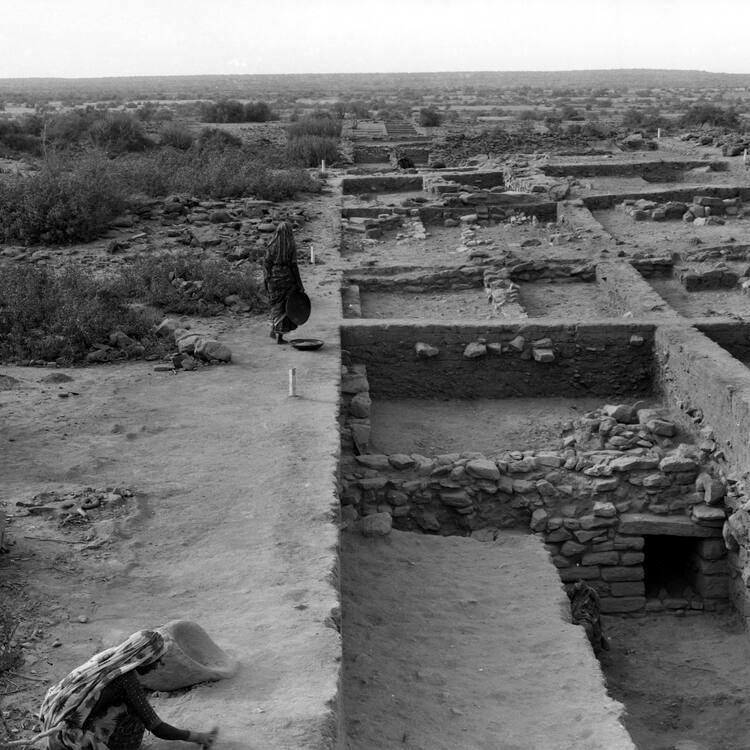 Middle town drain, Opening of the drain in the northern arm of the broad way © ASI

Dholavira: a Harappan city, is one of the very few well preserved urban settlements in South Asia dating from the 3rd to mid-2nd millennium BCE. Being the 6th largest of more than 1,000 Harappan sites discovered so far, and occupied for over 1,500 years, Dholavira not only witnesses the entire trajectory of the rise and fall of this early civilization of humankind, but also demonstrates its multifaceted achievements in terms of urban planning, construction techniques, water management, social governance and development, art, manufacturing, trading, and belief system. With extremely rich artefacts, the well-preserved urban settlement of Dholavira depicts a vivid picture of a regional centre with its distinct characteristics, that also contributes significantly to the existing knowledge of Harappan Civilization as a whole.

The property comprises two parts: a walled city and a cemetery to the west of the city. The walled city consists of a fortified Castle with attached fortified Bailey and Ceremonial Ground, and a fortified Middle Town and a Lower Town. A series of reservoirs are found to the east and south of the Citadel. The great majority of the burials in the Cemetery are memorial in nature.

The configuration of the city of Dholavira, during its heyday, is an outstanding example of planned city with planned and segregated urban residential areas based on possibly differential occupational activities, and a stratified society. Technological advancements in water harnessing systems, water drainage systems as well architecturally and technologically developed features are reflected in the design, execution, and effective harnessing of local materials. Unlike other Harappan antecedent towns normally located near to rivers and perennial sources of water, the location of Dholavira in the island of Khadir was strategic to harness different mineral and raw material sources (copper, shell, agate-carnelian, steatite, lead, banded limestone, among others) and to facilitate internal as well as external trade to the Magan (modern Oman peninsula) and Mesopotamian regions.

Criterion (iii): Dholavira is an exceptional example of a proto-historic Bronze Age urban settlement pertaining to the Harappan Civilization (early, mature and late Harappan phases) and bears evidence of a multi-cultural and stratified society during the 3rd and 2nd millennia BCE. The earliest evidence can be traced back to 3000 BCE during the early Harappan phase of the Harappan Civilization. This city flourished for nearly 1,500 years, representing a long continuous habitation. The excavated remains clearly indicate the origin of the settlement, its growth, zenith and the subsequent decline in the form of continuous changes in the configuration of the city, architectural elements and various other attributes.

Criterion (iv): Dholavira is an outstanding example of Harappan urban planning, with its preconceived city planning, multi-layered fortifications, sophisticated water reservoirs and drainage system, and the extensive use of stone as a building material. These characteristics reflect the unique position Dholavira held in the entire gamut of Harappan Civilization.

The ancient Harappan city of Dholavira was discovered in 1968 and excavated for 13 field seasons between 1989 and 2005. The unearthed excavations were simultaneously preserved and conserved, and display all physical attributes contributing to the Outstanding Universal Value of the property, that is to say the proto-historic systems of urban planning, water management systems, architectural elements and design, traditional knowledge of art and technology preserved in situ. All the attributes that convey the Outstanding Universal Value of the property are located in the property area. Physical evidence of the entire 1,500 years of inhabitation are spanning from pre-Harappan to post-Harappan stages. The excavated remains at Dholavira, to a large extent, illustrate attributes associated with industrial activities (e.g. bead manufacturing) and are indicative of the sophisticated life and exploitation of natural resources for nearly 1,500 years, trade, interregional relations and exchanges, the physical manifestations of these are largely found in situ. Conservation measures and consolidation of few areas have been carried out to prevent deterioration and have also been stabilized for ensuring preservation of its physical attributes. Guidelines for development and conservation need should be developed in the extended buffer zone.

The archaeological remains of the city of Dholavira include fortifications, gateways, water reservoirs, ceremonial ground, residential units, workshop areas, and cemetery complex, all clearly representing the Harappan culture and its various manifestations. The urban planning is evident from the in situ remains of the city that demonstrate systematic planning. The authenticity of the archaeological site is preserved through minimum interventions and scientific conservation principles and methods and in maintaining the exposed structures in their original configurations and in situ conditions and no additions or alterations have been made to the structural remains.

The excavated remains bear testimony to the style of construction, contextual evidence for architectural elements, and layout of a bead manufacturing workshop, that have been retained in situ to preserve their authenticity. The evidence of the configuration of the city, which has been well documented and preserved during excavation works, also bears testimony of the extensive planning, understanding of ratios and proportions and principles, alignment of the entire city in relation to cardinal directions, water harvesting, storm water drains, craftsmanship. These features are preserved extensively due to their construction in stone masonry with mud brick cores, and architectural features are in a good state of conservation.

The property area and buffer zone are managed by the Regional Apex Committee and Local Level Committee, with major stakeholders as the member. This participatory mechanism ensures the dialogue among different interest groups. The Site Management Plan has been approved and implemented by the Archaeological Survey of India.