Located in the Yangtze River Basin on the south-eastern coast of the country, the archaeological ruins of Liangzhu (about 3,300-2,300 BCE) reveal an early regional state with a unified belief system based on rice cultivation in Late Neolithic China. The property is composed of four areas – the Area of Yaoshan Site, the Area of High-dam at the Mouth of the Valley, the Area of Low-dam on the Plain and the Area of City Site. These ruins are an outstanding example of early urban civilization expressed in earthen monuments, urban planning, a water conservation system and a social hierarchy expressed in differentiated burials in cemeteries within the property. 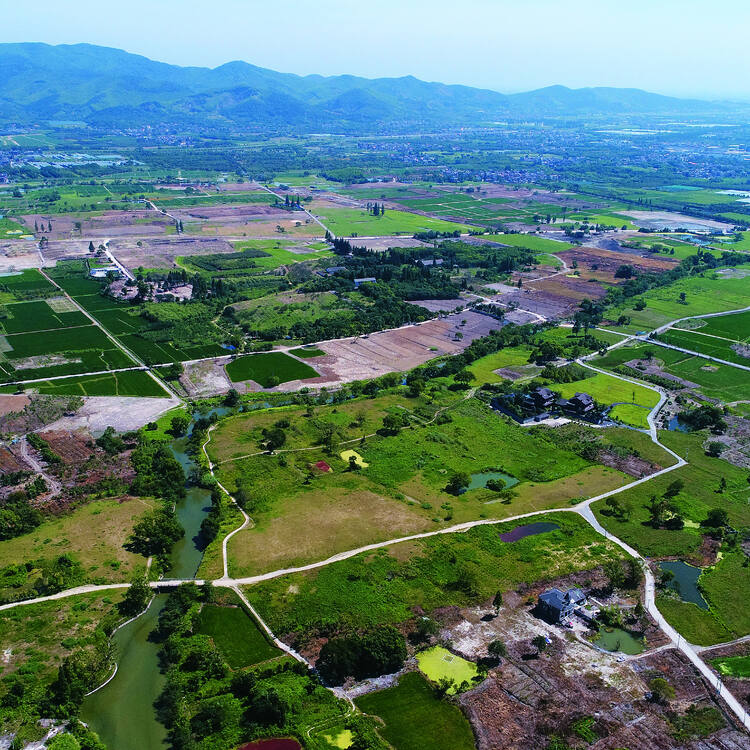 The Archaeological Ruins of Liangzhu City was the centre of power and belief of an early regional state in the Circum-Taihu Lake Area. It is located on a plain criss-crossed by river networks in the eastern foothills of the Tianmu Mountains in the Yangtze River Basin on the southeast coast of China.

The property is composed of four areas: Area of Yaoshan Site; Area of High-dam at the Mouth of the Valley; Area of Low-dam on the Plain – Causeway in Front of the Mountains; and Area of City Site.

The Archaeological Ruins of Liangzhu City reveals an early regional state with rice-cultivating agriculture as its economic base, and social differentiation and a unified belief system, which existed in the Late Neolithic period in China. With a series of sites, including the City Site built during ca. 3300-2300 BCE, the Peripheral Water Conservancy System with complex functions and socially-graded cemeteries (including an altar), and the excavated objects represented by series of jade artefacts symbolizing the belief system, as well as its early age, the property represents the remarkable contributions made by the Yangtze River Basin to the origins of Chinese civilization. In addition, the pattern and functional zoning of the capital, together with the characteristics of the settlements of the Liangzhu culture and of the Outer City with the terraces, support strongly the value of the property.

Criterion (iii): The Archaeological Ruins of Liangzhu City, as the centre of power and belief of Liangzhu culture, is an outstanding testimony of an early regional state with rice-cultivating agriculture as its economic base, and social differentiation and a unified belief system, which existed in the lower reaches of the Yangtze River in the Late Neolithic period of China. It provides unparalleled evidence for concepts of cultural identity, social and political organization, and the development of society and culture in the late Neolithic and early Bronze Age in China and the region.

Criterion (iv): The Archaeological Ruins of Liangzhu illustrates the transition from small-scale Neolithic societies to a large integrated political unit with hierarchy, rituals and crafts. It includes outstanding examples of early urbanization expressed in earthen monuments, city and landscape planning, social hierarchy expressed in burial differentiations in cemeteries within the property, socio-cultural strategies for organization of space, and materialization of power. It represents the great achievement of prehistoric rice-cultivating civilization of China over 5000 years ago, and as an outstanding example of early urban civilization.

The four component parts of the Archaeological Ruins of Liangzhu City include all the identified attributes necessary to convey its significance as an outstanding representation of a prehistoric early state and urban civilization in the Yangtze River Basin.

The property contains all material elements of the archaeological ruins, four main man-made elements, i.e. the City Site, the Peripheral Water Conservancy System, the socially-graded cemeteries (including an altar), and excavated objects represented by jade artefacts, as well as the natural topography that is directly linked to the function of the sites.

The buffer zone includes the historical environmental elements associated with the value of the property, such as mountains, isolated mounds, bodies of water and wetlands, but also includes scattered contemporaneous archaeological remains surrounding the ancient city, as well as the intrinsic association of value between different sites and their spatial layout and pattern.

The impact of urban development and construction and natural factors threatening the property have been properly addressed.

Sites in the four areas, including the City Site, the Peripheral Water Conservancy System, the socially-graded cemeteries (including an altar), preserved as archaeological sites, carry the authentic historical information of the heritage of the period ca. 3300-2300 BCE, including characteristics in site selection, space and environment, location and layout, contour of remains, materials and technologies, and historical function of the sites, as well as the internal connection between the overall layout of the property and individual elements, and the historical natural environment of the distribution region of the sites. The objects unearthed from the four areas represented by jade artefacts authentically preserve the shape, categories, decorative patterns, functions, materials and the complex processing technologies and exquisite craftsmanship of the artefacts. Together with the archaeological sites, they authentically and credibly demonstrate the degree of development of the rice-cultivating civilization in the lower reaches of the Yangtze River in the Neolithic period and provide a panorama of Archaeological Ruins of Liangzhu City as an early regional urban civilization.

Three components sites, Area of Yaoshan Site (01), Area of Causeway in Front of the Mountains (03-2), and Area of City Site (04) of the Archaeological Ruins of Liangzhu City, have obtained the highest-level national protection and are located in the Key Protection Subzone within the protection range of “Liangzhu Archaeological Site”, a National Priority Protected Site for the protection of cultural relics. The Area of High-dam at the Mouth of the Valley (02) and Area of the Low-dam on the Plain (03-1) were listed as Provincial Protected Sites of Zhejiang in 2017, and an application is being processed for listing them as National Priority Protected Sites.

Special protection policies and regulations for the property have been formulated and improved, including Regulations for the Protection and Management of Liangzhu Archaeological Site of Hangzhou (revised in 2013), and a series of special regulations for heritage protection has been prepared, issued and implemented, including the Conservation Master Plan for the Liangzhu Archaeological Site (2008-2025) as a National Priority Protected Site, and monitoring over the property and its surroundings is also strengthened.

All four areas of the Archaeological Ruins of Liangzhu City share the same buffer zone and are managed effectively in a uniform way by a common management authority – the Hangzhou Liangzhu Archaeological Administrative District Management Committee.

It has a clear system for division of work and responsibilities, complete functions, sufficient technical and management staff specializing in protection, sufficient resources of funds, and complete facilities.

Various protection and management regulations will be strictly implemented, environmental capacity and development and construction activities in the property area will be effectively controlled, and negative impacts on the property from the pressures of various developments will be curbed; demands of stakeholders will be coordinated and taken into overall consideration, and the balance between the protection of the property and developments in tourism and urban construction will be kept, both rationally and effectively.

Research, interpretation and dissemination of the heritage value will be strengthened; the integrated function of the property, including cultural tourism and ecological protection, will be brought into play appropriately, and a sustainable and harmonious relationship between the protection of Archaeological Ruins of Liangzhu City and the development of Yuhang District and Hangzhou City will be maintained.