The List Landscape for Breeding and Training of ...
Print

The property is situated on the Elbe (Labe) River flood plain where there is sandy soil, ox bow lakes and the relic of a riparian forest. The structure and functional use of plots of land (pastures, meadows, forests, fields, park), network of paths, avenues, trees in regimented lines and arranged clusters as well as the solitary trees, the network of watercourses, ensembles of buildings in the farmsteads and the overall composition including functional relations and links between these components - all this fully serves the needs of breeding and training of the Baroque draught horses of the Kladruber breed which were used during the ceremonies at the Habsburg Imperial Court. The composition of the landscape is the evidence of the intentional artistic approach to the landscape. The property is a rare example of the synthesis of two types of cultural landscape - living and organically developing landscape where its key function dominates and the manmade landscape intentionally designed and created using the principles of the French and English landscape architecture which is an outstanding example of the specialised decorative farm - ferme ornée. The Imperial Stud Farm was founded in 1579 and its landscape has been used for this purpose since then. 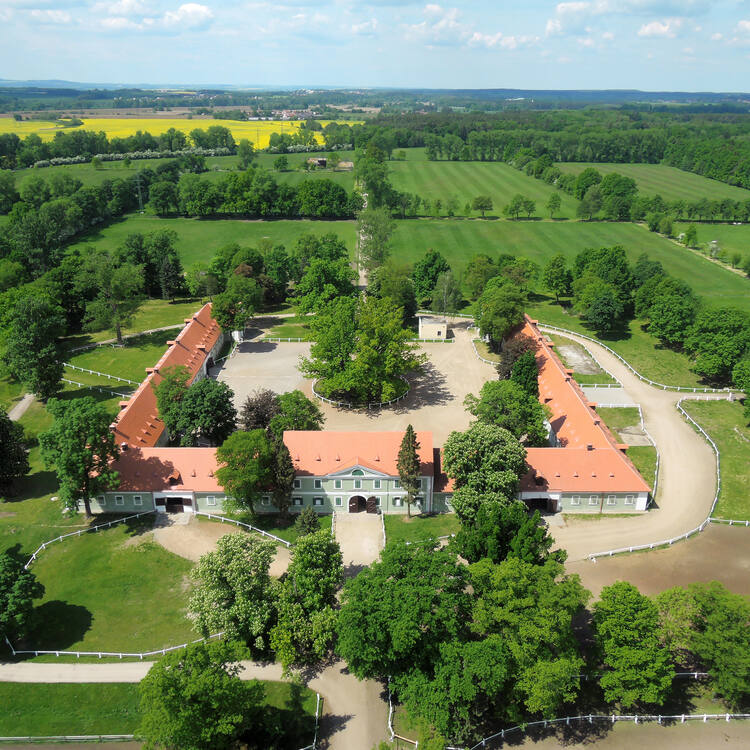 Františkov farmstead from the east. In the background, pastures divided by paths and watercourses lined with trees. The “infinite” axis crosses the farmstead towards the west. © National Stud Farm at Kladruby nad Labem, s.p.o.

The Landscape for Breeding and Training of Ceremonial Carriage Horses at Kladruby nad Labem is situated in the Polabská nížina (Elbe Lowland), in the Střední Polabí area. The property features a flat landscape, with sandy soils and includes fields, meadows, fenced pastures, a landscaped park, a forested area as well as buildings and farmsteads, all designed with the main objective of breeding and training the Kladruber horses, which were used in ceremonies by the Habsburg imperial court.

In 1563, the Emperor Maxmillian II of Habsburg founded a stud farm there and on 6 March 1579 his successor, Emperor Rudolph II of Habsburg granted it a charter as the Imperial Court Stud Farm. Since the early 17th century the stud farm, in close interaction with the surrounding landscape, has specialized in breeding ceremonial carriage horses of the gala carrossier type, solely to satisfy the demand of the Imperial Court. To date, the historic farmsteads located within the property have been in operation and they represent functional centre points of the unique landscape.

The Landscape at Kladruby nad Labem represents an outstanding and complete example of a horse – centred cultural landscape which has organically evolved and was, at the same time, intentionally and progressively designed as highly specialized ornamented farm – ferme ornée –dedicated to the breeding and training of ceremonial carriage horses and reflecting at the same time the Habsburg’s aesthetic ambitions. The historical tripartite structure of this fluvial area is still clearly discernible, with its old meanders and oxbow lakes, which were turned into a late ‘romantic’ designed landscape, the ‘classical’ regular fenced and tree-delimited pastures, the straight tree-lined avenues, the network of irrigation canals, fed by the Kladrubský náhon, the forest to the north, providing for a range of resources, the different farmsteads, all serving distinct functions, the stud architecture and the dependent village. Kladruby nad Labem´s tangible landscape features, along with the local knowledge and way of life, exceptionally reflect the single function for which the landscape was consistently modified and adapted: horse-breeding and training the special Kladruber horses which can be seen as living monuments.

This property represents an exceptional example of landscape reflecting the development of a specific equestrian culture in Europe, at the time when absolute monarchies were in ascendance.

Criterion (iv): The Landscape for Breeding and Training of Ceremonial Carriage Horses at Kladruby nad Labem is an exceptional example of a landscape which has been consistently and intentionally modified through the centuries, utilizing the principles of Classicist and Romantic Landscaping, to create a suitable environment for the purpose of horse-breeding and training of draft ceremonial horses, exceptionally reflecting the development of the Habsburgs and their representational needs at a time when absolute monarchies were in the ascendance. The property also represents a complete example tangibly reflecting the development of a specific equestrian culture in Europe spanning over four centuries, focused on breeding and training of ceremonial carriage horses.

Criterion (v): The Landscape at Kladruby nad Labem exceptionally reflects the use and purposeful adaptation of the geomorphological, pedological and hydrological features and environmental resources of a fluvial area throughout the centuries for horse–breeding and training. The current organisation of the landscape, with its still-evident tripartite structure, with old meanders and oxbow lakes turned into a designed landscape, the fenced and tree-delimited pastures, the avenues, the network of irrigation canals, the stud architecture and the dependent villages, along with the local knowledge and way of life dependent on stud operation and horse-breeding, represents an outstanding example of human interaction with the environment devoted to the breeding and training of the Kladruber horses.

To date, the Landscape has been preserved, within its historical borders and area that in the past corresponded to the size of the herd needed to supply the required number of trained ceremonial carriage horses set by the Imperial Court. The utilitarian character of the landscape is still fully manifested in the preserved functional integrity of its composition and in its main attributes that consist of pastures of adequate size for the herd, grassland for hay production, arable land for production of grain fodder, forests for timber production used as building material and fuel, sufficient water supply, roads and drives necessary for training carriage horses in hand; functionally diversified sets of buildings, traditional knowledge developed along the centuries on the horses and their needs and on their environment.

The Landscape still provides all the resources necessary for successful breeding of these horses and the environment for their training. Horse breeding is carried out in functionally diversified historic stables and other complementary structures. The sets of buildings at all farmsteads reflect the requirements for carriage horse stabling that have been developed over many years starting from the early 19th century and they have been recently restored.

The integrity of the formal composition of the Classicist part of the Landscape has been only partially preserved e.g., in the roads lined with trees, watercourses, the grid of pasture units. The integrity of the landscape composition of the romantic picturesque park at Mošnice has also been preserved – the carriage bridle way from which fan-like vistas open at a rich assortment of solitary trees and group plantings arranged according to the compositional principles of perspective, the former river meanders oxbow lakes and naturally regenerating alluvial vegetation in the relict of the flood plain forest. The integrity of the productive forests in the northern part of the property is essentially expressed by the network of straight clear-cut strips and forest avenues used for horse training.

The functional authenticity of the property has been preserved; the Landscape is still used for breeding and training of carriage horses of the gala carrossier type, specifically the Kladruber breed. The tripartite composition of this landscape with its classicist and romantic designed elements have been preserved and discernibly reflect the need of this century – long exploitation programme for horse breeding and training. Linear planting (tree-lined walkways, avenues, windbreaks, and planting along watercourses) dividing the landscape composition have also been preserved in the form of native species and overall pattern. The network of watercourses, which is important for both the function and composition of the landscape, has been preserved in the same structure as it was in 1876. Traditional materials are used for its maintenance. A similar approach is used for the maintenance of pasture fencing. The historic urban structure of settlements has not been compromised by the industrial development of modern times, and the original links with countryside have been preserved.

The property is included in the Kladrubské Polabí Conservation area, designated with provision ref n. MK 72096/2015 pursuant Act n. 20/1987 as amended. It has been protected as a unique example of a landscape shaped for horse breeding and training. The Stud Farm itself is a National Heritage site as per Government Decree 132/2001 and some parts of the landscape are included in Natura 2000 network as a Site of Community Importance as per Government Decree n. 73/2016 amending GD n. 318/2013. Other sites within the property are covered by heritage protection status. The Kladruber horse breed also enjoys legal protection since 2002 as a living monument. Formal designation of Kladrubský náhon as cultural heritage reinforced the overall legal protection of the property in 2019.

The basic protection instrument for the property is the Heritage Act n. 20/1987, which stipulates obligations for the owner, user, public administrations, juridical and physical persons with regard to protected heritage but it is also covered by the provisions of Act No. 114/1992 Coll., on Nature and Landscape Protection, as amended.

Since 2017, the implementation of provisions of the Heritage Act for the Kladruby nad Labem are under the responsibility of the Municipal Authority of Přelouč. Several territorial plans complement legal protection for the property.

Most of the property is owned by the State and is under the responsibility of the Ministry of Agriculture, managed by the following entities: National Stud Farm Kladruby nad Labem, the River Elbe Authority and Czech Land-Use Authority.

The Management system is based mostly on state-driven bodies, which have elaborated management instruments to guarantee the management and implementation of their operational activities. A memorandum for establishing a Steering Group was signed in 2016 and was renewed in June 2018. It has coordination, overseeing and advisory tasks.

A number of management instruments and mechanisms exist for the property. A management plan for the stud farm was prepared in 2010, updated in 2012 and under revision as of 2018. An Agreement on general Principles of Restoration and further development of the Area of the NHS of the Stud Farm at Kladruby nad Labem (May 2017) guides protection and management of the property as a national heritage site (NHS). The forest is covered by a Forest Management Plan containing guidelines and recommendations and is valid from 2016 through 2025.

Medium- and Long-term sustenance of the Outstanding Universal Value of the property needs management coordination, stability, sustainability and implementable management instrument based on tested formulas, integrating risk and visitor management as well as Heritage Impact Assessment mechanisms and opportunities for strengthening the property’s integrity locally.