The Plain of Jars, located on a plateau in central Laos, gets its name from more than 2,100 tubular-shaped megalithic stone jars used for funerary practices in the Iron Age. This serial property of 15 components contains large carved stone jars, stone discs, secondary burials, tombstones, quarries and funerary objects dating from 500 BCE to 500 CE. The jars and associated elements are the most prominent evidence of the Iron Age civilization that made and used them until it disappeared, around 500 CE. 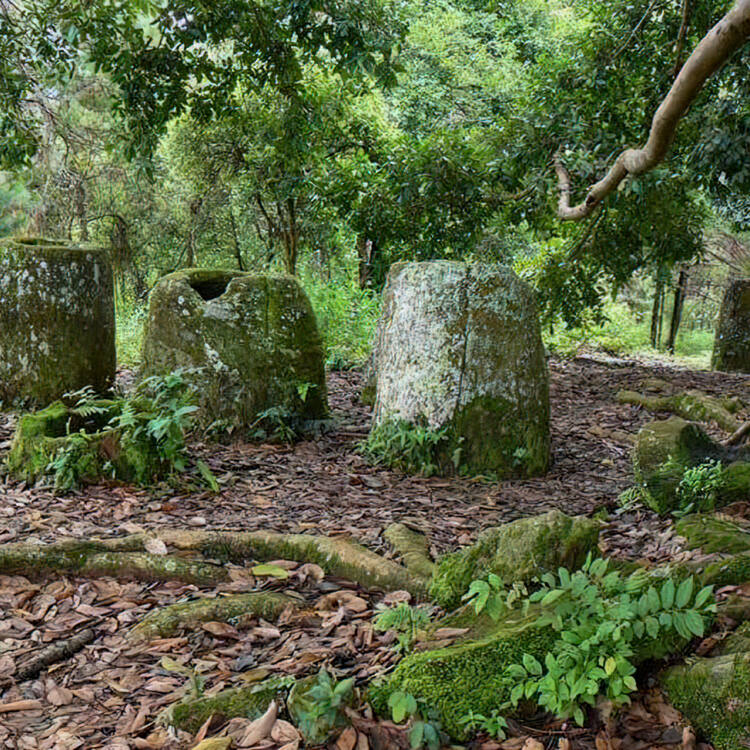 More than 2100 tubular-shaped megalithic stone jars used for funerary practices in the Iron Age give the Plain of Jars its name. This serial property of 15 components contains 1325 of these large carved stone jars, stone discs (possibly lids for the jars), secondary burials, grave markers, quarries, manufacturing sites, grave goods and other features. Located on hill slopes and spurs surrounding the central plateau, the jars are large, well-crafted, and required technological skill to produce and move from the quarry locations to the funerary sites. The jars and associated elements are the most prominent evidence of the Iron Age civilisation that made and used them, about which little is known. The sites are dated from between 500 BCE and 500 CE (and possibly up to as late as 800 CE). The jars and associated archaeological features provide evidence of these ancient cultural practices, including associated social hierarchies. The Plain of Jars is located at an historical crossroads between two major cultural systems of Iron Age southeast Asia – the Mun-Mekong system and the Red River/Gulf of Tonkin system. Because the area is one that facilitated movement through the region, enabling trade and cultural exchange, the distribution of the jars sites is thought to be associated with overland routes.

Criterion (iii): The Plain of Jars exhibits an exceptional testimony to the civilisation that made and used the jars for their funerary practices over a period from approximately 500 BCE to sometime after 500 CE. The size of the megalithic jars, and their large number and wide distribution within the Province of Xiengkhuang is remarkable, and the serial property of 15 components contains a range of sites that can attest to the quarrying, manufacturing, transportation and use of the funerary jars over this lengthy period of southeast Asian cultural histories.

The integrity of the serial property is based on the material evidence contained in the 15 components, the intactness of the individual components and the series as a whole, and the relatively stable state of conservation of the attributes. There are impacts on the visual integrity of some components, such as the construction of new houses and Buddhist temple outside the buffer zone for Site 1; poorly sited roads/tracks within several components; and conservation problems and intrusive constructions within Site 3. Some attributes have been damaged in the past by bombing and other effects of war, and by cattle grazing.

The authenticity of the serial property is based on the form, design, materials and locations of the megalithic jars and other attributes such as lids, secondary burials and archaeological deposits. For the most part, the materials are original, located in their original locations, with relatively little disturbance to the archaeological deposits. While past factors have damaged the jars and their settings, their abundance, antiquity and condition support the authenticity of the serial property.

The serial property is protected under the Law on National Heritage 2013, supported by the Decree of the President of the Lao People’s Democratic Republic on the Preservation of Cultural, Historical and Natural Heritage 1997, and the Provincial Governor’s Decree concerning the Management and Conservation of the Plain of Jars World Heritage Sites No. 996. In addition, Decree No. 870 concerning Establishment and Operation of Plain of Jars Heritage Technical Division sets up the structure, duties of the newly-established site management office. Provincial governor’s Decree No. 995 provides a mechanism for funding site conservation through revenue sharing from tourism. Implementation of the mechanisms of protection occurs at the national, provincial, district and village levels. Coordination is provided by the National Committee for World Heritage and the Xiengkhuang Heritage Steering Committee. A 5-year action plan of specific projects has been developed, including an archaeological research plan, as well as resources for fencing, basic visitor facilities, road improvements, implementation of the national heritage law, and production of interpretive materials. The day-to-day management of most components is provided by nearby villages based on contracts established with the Provincial Government; and a formula for sharing the income from ticket sales with local communities is in place.

The main factors affecting this property are processes of natural deterioration and future development pressures. The State Party has recently achieved the clearance of UXO from the components, commendably removing a challenging barrier to access, research and safety.

The management system requires further development, including the establishment of a management plan and a conservation plan to ensure coordination and consistent conservation approaches, and to pursue needed longer-term strategic improvements. A number of aspects of the management system are yet to be fully implemented, such as the arrangements for Heritage Impact Assessment. Interpretation and provision of information about the sites to visitors are modest and should be enhanced in the longer term, particularly in light of continuing archaeological research and sustainable tourism initiatives for the Province.