The List Risco Caido and the Sacred Mountains of Gran ...
Print

Located in a vast mountainous area in the centre of Gran Canaria, Risco Caído comprises cliffs, ravines and volcanic formations in a landscape of rich biodiversity. The landscape includes a large number of troglodyte settlements — habitats, granaries and cisterns — whose age is proof of the presence of a pre-Hispanic culture on the island, which has evolved in isolation, from the arrival of North African Berbers, around the beginning of our era, until the first Spanish settlers in the 15th century. The troglodyte complex also includes cult cavities and two sacred temples, or almogarenes — Risco Caído and Roque Bentayga — where seasonal ceremonies were held. These temples are thought to be linked to a possible cult of the stars and Mother Earth. 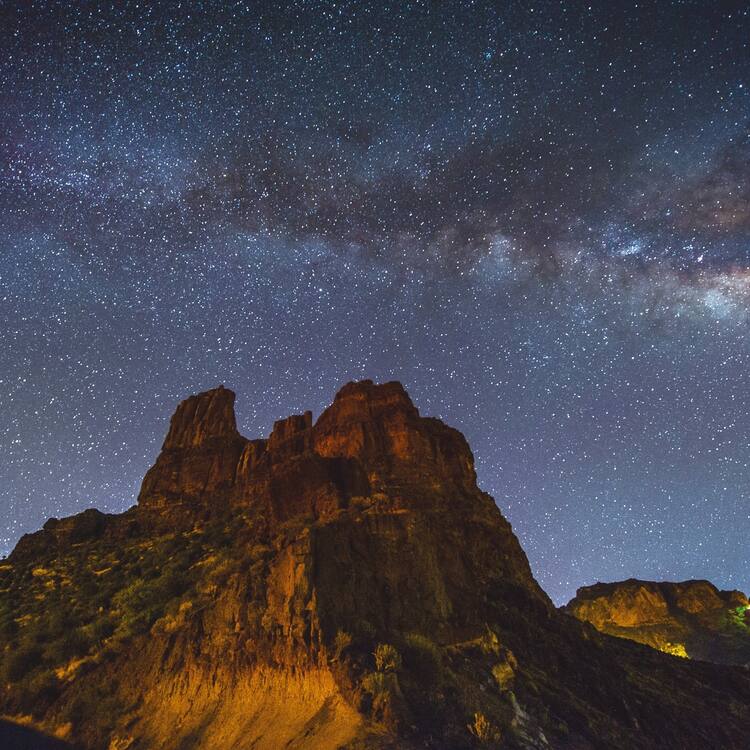 The Milky Way over the Bentayga Highlands © Nacho Gonzalez

Risco Caido and the Sacred Mountains of Gran Canaria Cultural Landscape encompasses a huge central mountainous area on Gran Canaria island, sheltered by the Caldera de Tejeda, and formed of cliffs and ravines, in an area of exceptional biodiversity. The property contains a set of manifestations, which are primarily archaeological, of an extinct insular culture that seems to have evolved in total isolation, from the arrival of the first Berbers from North Africa, probably at the beginning of our era, until the Spanish conquest in the 15th century. The property has troglodyte sites, which contain a large number of rock art images, some of which are very probably cultural, and farming settlements, giving rise to a cultural landscape that still conserves most of its original elements, and the visual relationships between them. The vestiges of this pre-Hispanic culture have survived in time and space, shaping the landscape, and conserving traditional practices such as transhumance, terrace-farming installations, and water management installations. The Libyco-Berber inscriptions constitute unquestionable proof of the local presence of a pre-Hispanic culture, and bear testimony to the westernmost expression of Amazigh culture, which, for the first time, evolved into another unique insular culture.

Criterion (iii): All the archaeological sites and rock art manifestations of the Risco Caido and the Sacred Mountains of Gran Canaria Cultural Landscape bear unique and exceptional testimony to an extinct insular culture that seems to have evolved in isolation for more than 1500 years. The archaeological and historic testimony of the property bear out the fact that this culture stems from the original populations from the Berber Maghreb, which is in itself exceptional, as this is a unique case of an insular culture whose origins go back to the Amazigh world.

Criterion (v): The troglodyte sites of the Caldera de Tejeda are a unique example of this type of habitat in ancient insular cultures, illustrating a complex level of organisation of space and of adaptive management of resources. The spatial distribution and the sites documented enable a detailed understanding of the ways in which the ancient Canarians made use of the territory. This is an exceptional case, in which traditional land use practices that are highly adaptive and original, stemming from a culture that has disappeared, are still in use today.

The property, whose geographical boundaries are set by the Caldera de Tejeda, has spectacular and monumental physical characteristics, sacred forests, troglodyte settlements on the cliffs and summits, agricultural installations for terrace farming and trails established by the ancient Canarians. The relationships between the different attributes are clearly visible, with numerous viewsheds for visitors. The property’s integrity makes it an exceptional cultural landscape, that is both complete and very harmonious, representing the final mountain refuge of the Imazighen on the Canary Islands. Over the last few years, there has been a positive evolution in the integrity of the main sites, mainly driven by the management of tourism impact and the dissemination of information.

Part of the cultural landscape is considered one of the greatest expressions of biodiversity in the Canary Islands, and can be considered as a genuine vestige of the natural habitat of the first inhabitants of the Canary Islands. The authenticity of the attributes of the property is made manifest in particular by sites that are probably cultural, former granaries and multiple examples of troglodyte settlements which largely retain their original form and design, particularly troglodyte sites decorated with rock art images and bearing Libyco-Berber inscriptions. The situation and the setting of the main sites have remained without significant change for more than 500 years after the Spanish conquest. Even the route of the ancient trails, the underground cisterns and the location of the former refuges have been maintained in time and space. As a result, the main scenic elements of the cultural landscape and skyscape, including the night sky, have remained virtually unchanged since the Spanish conquest in the 15th century.

A set of protection measures for the property ensures the complete protection of the landscape and of all the cultural and natural attributes of the property, in a short and medium term perspective. As for the cultural heritage, the main attributes have been inscribed on the list of Properties of Cultural Interest, which entitles them to maximum protection status both in national legislation and in Canarian regional legislation. The majority of the property and its buffer zone is also covered by some of the protection measures of the Canary Island Network of Protected Natural Areas, and of the European Natura 2000 network.

The Cabildo de Gran Canaria is responsible, and is the competent authority, for managing the property by virtue of the devolved powers it holds. It has the means and the human and financial resources to address this task. Bearing in mind the new challenges and objectives entailed by the nomination, such as enhancing grass-roots participation in the management process, a steering committee was set up in 2015 to provide permanent coordination of the management and the intervention/action strategy for the property. One of the Steering Committee’s main contributions has been to draw up the Integrated Management Plan for Risco Caido. The management and governance organisational chart of the property has been completed by the Risco Caido and the Sacred Mountains of Gran Canaria Foundation, which is currently in the process of being set up. The integrated management plan stresses the importance of considering the cultural landscape values as a whole, including addressing questions such as the protection of the landscape and skyscape, promoting local produce, sustainable mobility and the fostering of a sustainable tourism model.