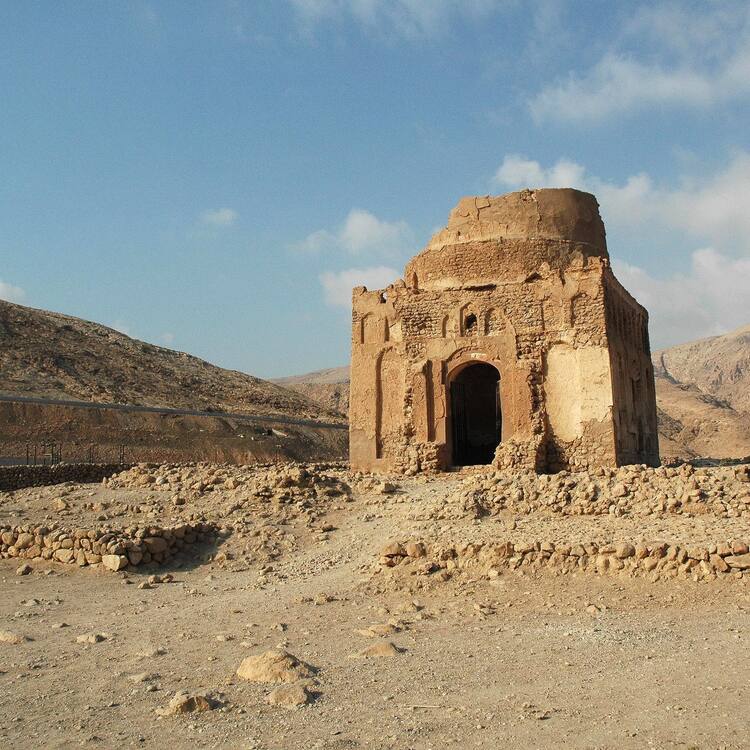 The Ancient City of Qalhat is located on the eastern coast of the Sultanate of Oman, approximately 20 kilometres north of the city of Sur. The property includes the entire Ancient City of Qalhat, demarcated by its inner and outer walls, which extends over 35 hectares, as well as areas outside the walls where the necropolises are situated.

The city was an important port on the sea of Oman along the East Arabian Coast, which allowed for trade with the Persian Gulf and the Indian Ocean and hence functioned as a trade centre between India and through it East and South East Asia and the Arabian Peninsula. Qalhat flourished in the 11th to 16th century CE under the ruling of the Princes of Hormuz, who coordinated vital exports of horses, dates, incense and pearls. Following Portuguese attacks, the Ancient city of Qalhat was abandoned in the 16th century and has since been preserved as an archaeological site. The remains and monuments on site comprehensively represent a port city of the Kingdom of Hormuz and reflect its legacy, architecture and urban design.

Criterion (ii): Qalhat exhibits the cultural and commercial interchange of values within the trading range of the Kingdom of Hormuz, which extended to India and as far as China and South East Asia. The archaeological site of Qalhat provides physical evidence of these interchanges, documenting the architectural features which indicate its own produce, dates, Arabian horses as well as spices and pearls but also integrating the multi-cultural features of a medieval cosmopolitan city, with houses influenced by the needs of their various owners and inhabitants of foreign cultural origin. The ancient city also includes a number of highly representative buildings which were references in narratives authored by historic travellers.

Criterion (iii): The Ancient City of Qalhat presents a unique testimony to the Kingdom of Hormuz, as it prospered from the 11th to 16th century CE. Ancient Qalhat presents exceptional evidence of a major trade hub, which came under the rule of the Princes of Hormuz and profited from its geo-political position in the region. It was a seasonal residence and refuge to the Princes of Hormuz, which has given it the title of a secondary capital of the larger kingdom. The urban plan and the excavated buildings of Qalhat show features and characteristics specific to the Kingdom of Hormuz and the archaeological remains are its most complete representation and provide further potential for a more detailed understanding of its ways of life and trade.

All key components of the Ancient City of Qalhat lie within the property boundaries, which include the entirety of the intra-muros city and the structures immediately outside the city wall. The remains of the walls and street fabric provide a representative testimony to the Kingdom of Hormuz, with the archaeological finds adding to our understanding of how it functioned.

The Ancient city of Qalhat is free of major threats, with the highway along the western side of the property being an unfortunate past intervention. It is important that future infrastructure and other developments in the vicinity of the property avoid any negative impacts to the larger landscape qualities of the site. In case of future increased visitor numbers as result of new visitation concepts, Qalhat needs a controlled and managed tourist traffic to avoid any pressure and behaviour.

The Ancient city of Qalhat since its abandonment in the 16th century is an archaeological site. Its architectural and urban fabric and form remain authentic, almost untouched, as does its setting. The abandonment of the Ancient City of Qalhat plays a positive role in the conservation of its authenticity. The site has not been occupied since the 16th century and, therefore, it preserves all characteristics of organization, function and architectural techniques corresponding to the Islamic Period in general and the period of the Hormuz Kingdom in particular. Conservation, visitor management and site presentation plans aim at preserving this state to the largest extend possible.

Likewise, archaeological excavations have been well planned, thorough and minimal, an approach that should be commended and continued. Conservation works undertaken post-excavation will likewise be guided by minimum intervention approaches. The location of the Ancient City of Qalhat between the mountains, deep valleys and the sea is essential to its largely retained authenticity in setting. Authenticity in meaning is related both to the authenticated history of the site and to stories and myths associated with it, which will be respected within the overall management approach.

The Ancient City of Qalhat is designated as a national cultural heritage site of Oman and is therefore under the highest legal level of protection of national heritage according to Royal Decree No. 6/80. The same Royal Decree also assures the protection of a buffer zone around the heritage sites concerned. The legal protection is effectively implemented by means of fencing and human guards patrolling the archaeological site. Before the property was closed to the public for conservation, the section of the site around Bibi Maryam was protected by the residents of the neighbouring village which was disrupted when the site was closed and visitation was discontinued. This guardianship tradition will be re-activated as part of the future visitor concept.

The administrative organization responsible for the protection and management is the Ministry of Heritage and Culture. The Directorate General of Archaeology as a part of the Ministry’s Administrative structure looks after the day to day management of the site. A management plan was finalized and officially adopted in June 2018, which will guide the establishment of a strengthened management unit and system on site. In light of the possible risks by earthquakes or other natural disasters this management system should integrate risk preparedness and disaster management strategies.