The List Churches of the Pskov School of Architecture
Print

This group of monuments is located in the historic city of Pskov, on the banks of the Velikaya River in the northwest of Russia. Characteristics of these buildings, produced by the Pskov School of Architecture, include cubic volumes, domes, porches and belfries, with the oldest elements dating back to the 12th century. Churches and cathedrals are integrated into the natural environment through gardens, perimeter walls and fences. Inspired by the Byzantine and Novgorod traditions, the Pskov School of Architecture reached its peak in the 15th and 16th centuries, and was one of the foremost schools in the country. It informed the evolution of Russian architecture over five centuries. 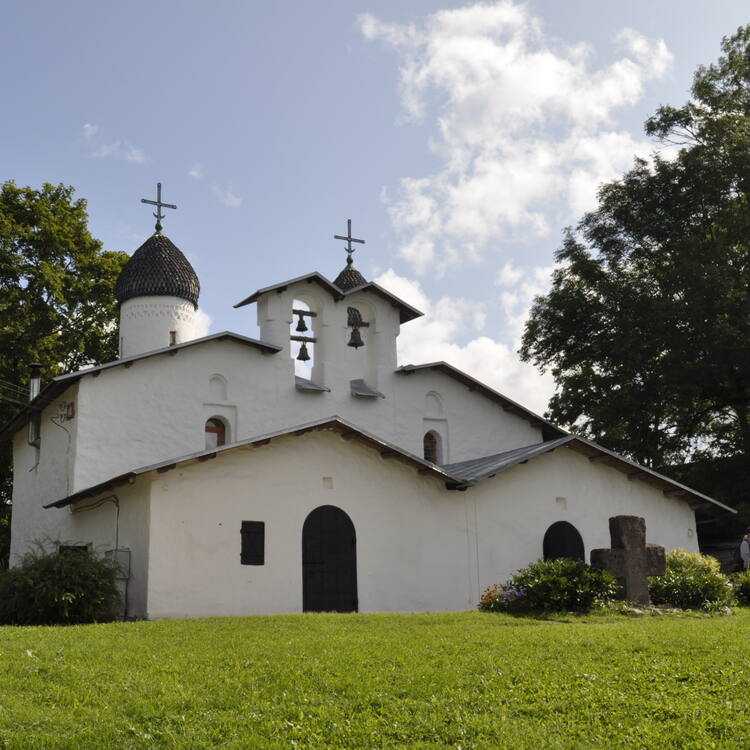 «Church of Pokrova (Intercession) ot Proloma (at the breach in the wall), 15th-16th centuries». View from the northwest © State budgetary institution of culture “Research and Development Centre for Conservation and Use of Historical and Cultural Monuments of the Pskov Region

These physical features representing the work of the Pskov School include, among others: architectural elements influenced by Byzantine traditions, transmitted through the earlier Novgorod School; distinctive use of local construction materials; and pragmatist stone buildings with purist and minimalistic approaches to decoration characterized by restraint in form and decoration. The school utilized a limited set of decorative techniques and architectural elements, illustrating a synthesis of vernacular styles brought into urban and monumental contexts, cubic volumes, domes, tholobates, side chapels, porches, narthexes and belfries, as well as other decorative features. The ten selected churches and cathedrals which compose this serial property are recognizable with their historic architectural structures and their immediate property settings in the form of access routes, gardens, surrounding walls and fences, as well as vegetation elements, all contributing to the traditional atmosphere of these spiritual abodes which relates to the endeavours of the School to integrate architectural masterpieces into their natural surroundings.

Criterion (ii): The Pskov School of Architecture emerged under the influence of the Byzantine and Novgorod traditions and reached its height in the 15th and 16th centuries, when it exerted considerable influence in large areas of the Russian state and its stylistic and decorative characteristics became widely referenced. Whilst Pskov architects worked on monuments throughout Russia, including in Moscow, Kazan and Sviyazhsk, the ten selected churches in Pskov illustrate a local representation of the early development, experimental grounds and masterly references of the Pskov School.

The churches of the Pskov School of Architecture are largely free of immediate severe threats. All ten elements have kept their initial location in the structure of the town planning. As a group, they demonstrate integrity by including examples of all the historic stages of development of the Pskov School’s output, ranging from the early formative stages in the 12th century, to the apogee of the School in the 15th and 16th centuries. A number of serial components were affected during times of war, in particular during World War II, but are restored to a level which provides a credible reference to the Pskov School’s era of production.

At times, the setting of these religious monuments has become vulnerable to infrastructural and other developments. Given the strong focus of the Pskov School on the integration of monuments into their natural surroundings, it is essential to preserve these immediate settings, which is achieved by means of the designated buffer zone and should be substantiated by adequate visitor- and traffic-monitoring strategies.

The group of churches has preserved an acceptable degree of authenticity in style, decorative features, design, workmanship, atmosphere and, with a single exception, use and function. In material terms the churches have suffered in one way or another damage due to various wars over time, but this group of religious buildings has survived following restorations which remained true to the key architectural and decorative features of the Pskov School of Architecture. The needed repair and conservation works were undertaken using authentic materials, traditional technologies and the explicit aim of preserving the historical and cultural values of the property.

The traditional use of the churches and cathedrals as places of worship and, for some, as part of monastic structures, explicitly strengthens the authenticity, and the user community should be prominently and closely involved in the management processes in order to ensure the future transmission of authenticity in use and function.

The Churches of the Pskov School are protected as architectural monuments of state importance according to the resolution of the Council of Ministers of the Russian Soviet Federative Socialist Republic of 30.08.1960, no. 1327. The specific boundaries of each component were approved by the State Committee of the Pskov Region between 2010 and 2015 but should be revised where necessary to align with property boundaries or relevant physical boundaries of the churches’ setting. By order of the Government of the Russian Federation of 17.09.2016 No 1975-r, all components of the property were included in the Code of the most valuable cultural heritage properties of the Peoples of the Russian Federation. Traditional protection is provided by the Russian Orthodox communities, who care for the property according to religious requirements of maintenance.

Management is coordinated by the State Committee of the Pskov Region for the Protection of Cultural Heritage and carried out in strong cooperation with the Pskov Eparchy of the Russian Orthodox Church. A management plan was prepared in parallel with the preparation of the nomination and was formally approved by the Governor of the Region of Pskov and the Ministry of Culture of the Russian Federation. The management plan provides an integrated action plan for four years (2017 – 2020) and integrates its own quality assessment evaluation scheme which, at the end of the initial period, will commence a review of successes and the reformulation of necessary actions. Future revisions of the management plan will pay closer attention to the aspects of risk management, in particular how this relates to visitor and traffic management, as well as protection of setting and traditional use of the religious structures.
News