Throughout the arid regions of Iran, agricultural and permanent settlements are supported by the ancient qanat system of tapping alluvial aquifers at the heads of valleys and conducting the water along underground tunnels by gravity, often over many kilometres. The eleven qanats representing this system include rest areas for workers, water reservoirs and watermills. The traditional communal management system still in place allows equitable and sustainable water sharing and distribution. The qanats provide exceptional testimony to cultural traditions and civilizations in desert areas with an arid climate. 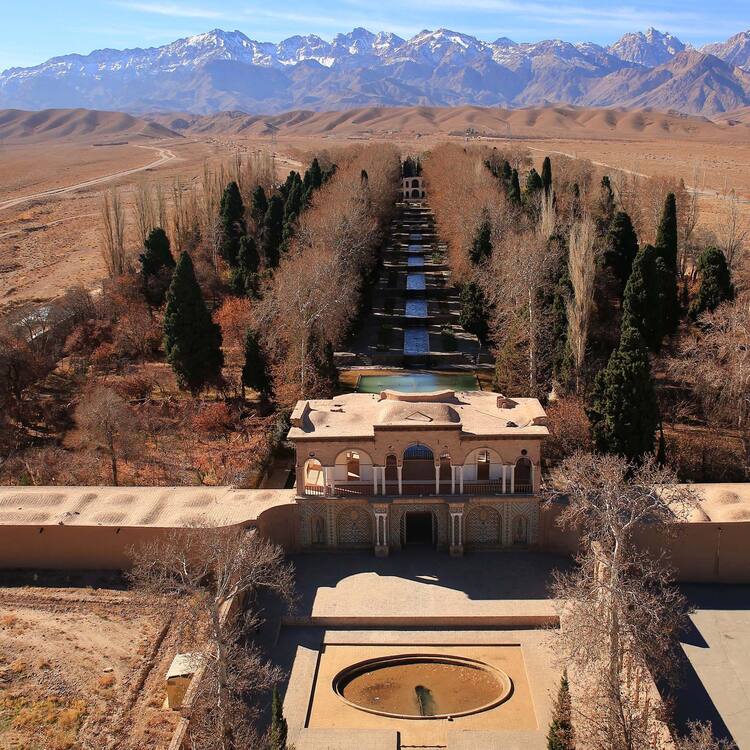 Throughout the arid regions of Iran, agricultural and permanent settlements are supported by the ancient qanat system of tapping alluvial aquifers at the heads of valleys and conducting the water along underground tunnels by gravity, often over many kilometres.

Each qanat comprises an almost horizontal tunnel collecting water from an underground water source, usually an alluvial fan, into which a mother well is sunk to the appropriate level of the aquifer. Well shafts are sunk at regular intervals along the route of the tunnel to enable removal of spoil and allow ventilation. These appear as craters from above, following the line of the qanat from water source to agricultural settlement. The water is transported along underground tunnels, so-called koshkan, by means of gravity due to the gentle slope of the tunnel to the exit (mazhar), from where it is distributed by channels to the agricultural land of the shareholders.

The levels, gradient and length of the qanat are calculated by traditional methods requiring the skills of experienced qanat workers and have been handed down over centuries. Many qanats have sub branches and water access corridors for maintenance purposes, as well as dependant structures including rest areas for the qanat workers, public and private hamams, reservoirs and watermills. The traditional communal management system still in place allows equitable and sustainable water sharing and distribution.

Criterion (iii): The Persian Qanat system is an exceptional testimony to the tradition of providing water to arid regions to support settlements. The technological and communal achievements of the qanats play a vital role of qanat in the formation of various civilisations. Its crucial importance for the larger arid region is expressed in the name of the desert plateau of Iran which is called “Qanat Civilisation”. Dispersion of primary settlements on alluvial fans of the inner plateau and deserts of Iran is immediately related with the distribution pattern of qanat system across the country. The system also presents an exceptional living cultural tradition of communal management of water resources.

Criterion (iv): The Persian Qanat system is an outstanding example of a technological ensemble illustrating significant stages in the history of human occupation of arid and semi-arid regions. Based on complex calculations and exceptional architectural qualities, water was collected and transported by mere gravity over long distances and these transport systems were maintained over centuries and, at times, millennia. The qanat system enabled settlements and agriculture but also inspired the creation of a desert-specific style of architecture and landscape involving not only the qanats themselves, but their associated structures, such as water reservoirs, mills, irrigation systems, and gardens.

The eleven qanats forming this property are still active water carriers and have retained not only their architectural and technological structures but also their function. They continue to provide the essential resource water sustaining Iranian settlements and gardens and remain maintained and managed through traditional communal management systems. These management systems have remained intact and been transferred from the distant past thanks to the collaboration of people and users.

To ensure the continued functionality of the qanats, the water catchment areas are included in the buffer zone and have been committed to highest protection levels considering their essential function in the provision of the water resources. Likewise, the agricultural areas illustrating the distribution and use of the water resources have been protected through buffer zones to allow the full long-term protection of the qanat system.

The authenticity of the eleven qanats has been respected regarding design, technology, building materials, traditions, techniques, management systems as well as intangible heritage associations based on knowledge of the natural environment, material technology and the indigenous culture. Qanats have been founded and constructed based on social collaboration, communal trust and honesty as well as common sense. Furthermore, their stability and functionality has been managed, preserved, expanded and developed based on such joint cooperation.

The eleven qanats comprising this series are included in the national register of monuments of the Islamic Republic of Iran. Their catchment and irrigation areas have been included in specifically designed protective zones with status of buffer zones. The further elaboration and completion of an inventory of the eleven components will assist in monitoring and communicating the full scope of protected attributes.

The overall management of the serial nomination is coordinated by a Steering Committee comprising representatives of the Qanat Councils and relevant government departments including the Cultural Heritage Handicrafts and Tourism Organisation (ICHHTO), Natural Resources, Agriculture, Energy, Road and Urban Development, Environment Protection Organisation, Rural Housing Foundation and NGOs relating to cultural heritage and the environment. Daily management concerns are considered through the ICHHTO National Qanat Base which acts through ICHHTO’s provincial offices. A Management Strategy and Action Plan was outlined at the time of nomination, which will be further developed into management and maintenance plans for the individual components These will include interpretation and tourism management plans as well as risk preparedness and disaster response strategies.

The eleven qanats are managed under traditional supervision of qanat councils, each qanat with its local qanat council composed of those knowledgeable in the respective region. The traditional management systems of the inscribed qanats contribute to their unique value but are also essential to their continued preservation and transmission to future generations. Historical knowledge and craft skills preserved over many generations need to be continuously handed down to ensure the future viability of this property. This management system, set up by owners, distributors, consumers and ordinary people, has developed and evolved with the passage of time which has made qanats survive until today and will be the key to their future conservation.

The eleven qanats are further supported by financial and technical means through national resources, and conservation and management measures at all qanats are underway respecting their authenticity and integrity.