The Lut Desert, or Dasht-e-Lut, is located in the south-east of the country. Between June and October, this arid subtropical area is swept by strong winds, which transport sediment and cause aeolian erosion on a colossal scale. Consequently, the site presents some of the most spectacular examples of aeolian yardang landforms (massive corrugated ridges). It also contains extensive stony deserts and dune fields. The property represents an exceptional example of ongoing geological processes. 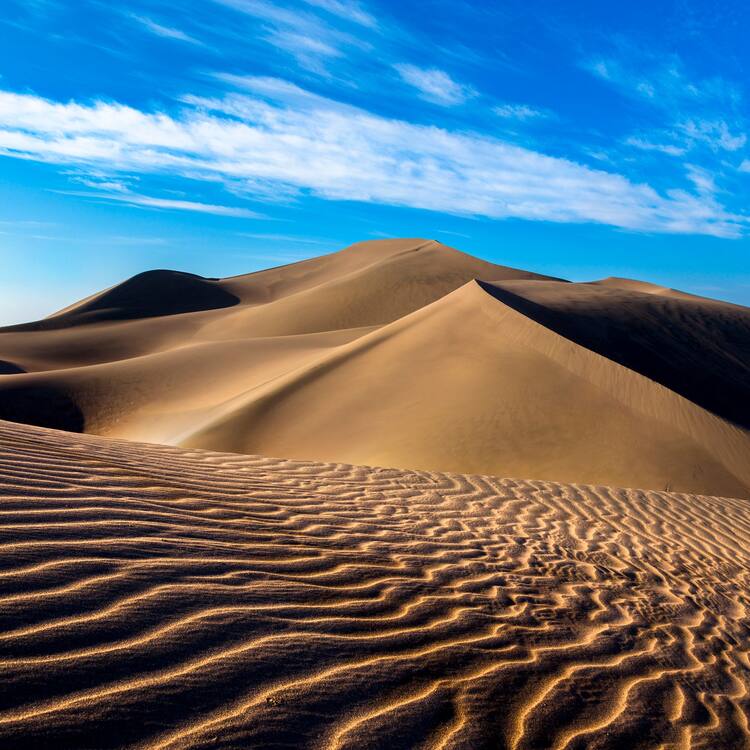 The Lut Desert is in the southeast of the Islamic Republic of Iran, an arid continental subtropical area notable for a rich variety of spectacular desert landforms. At 2,278,015 ha the area is large and is surrounded by a buffer zone of 1,794,134 ha. In the Persian language ‘Lut’ refers to bare land without water and devoid of vegetation. The property is situated in an interior basin surrounded by mountains, so it is in a rain shadow and, coupled with high temperatures, the climate is hyper-arid. The region often experiences Earth’s highest land surface temperatures: a temperature of 70.7°C has been recorded within the property.

A steep north-south pressure gradient develops across the region in spring and summer causing strong NNW-SSE winds to blow across the area between June and October each year. These long periods of strong winds propel sand grains at great velocity creating transportation of sediment and aeolian erosion on a colossal scale. Consequently, the area possesses what are considered the world’s best examples of aeolian yardang landforms, as well as extensive stony deserts and dune fields. Yardangs are bedrock features carved and streamlined by sandblasting. They cover about one third of the property and appear as massive and dramatic corrugations across the landscape with ridges and corridors oriented parallel to the dominant prevailing wind. The ridges are known as kaluts. In the Lut Desert some are up to 155 m high and their ridges can be followed for more than 40 km.

The wind also strips hard rocky outcrops bare of soil, which leaves extensive stony desert pavements (hamada) with sand-blasted faceted stones (ventifacts) across about 12% of the area. An extensive, black stony desert covers the basaltic Gandom Beryan plateau in the northwest of the core zone. The stony deserts in eastern Lut cover, as a rubbly veneer, extensive pediplains, which are rock platforms that truncate bedrock and gently slope away from the foot of neighbouring hills.

Sands transported by wind and washed in by intermittent streams have accumulated in the south and east, where huge sand-seas have formed across 40% of the property. These areas consist of active dunes some reaching heights of 475 m and are amongst the largest dunes in the world. The Lut Desert displays a wide variety of forms, including linear-, compound crescentic-, star-, and funnel-shaped dunes. Where sands are trapped around the lee of plants at the slightly wetter margins of the basin, nebkhas form to 12 m or more in height, arguably being the highest such features in the world.

The region has been described in the past as a place of ‘no life’ and information on the biological resources in this area is limited. Nevertheless the property possesses flora and fauna adapted to the harsh conditions including an interesting adapted insect fauna.

Criterion (vii): The Lut Desert protects a globally-recognized iconic hot desert landscape, one of the hottest places on earth. It is renowned for its spectacular series of landforms, namely the yardangs (massive corrugated ridges) in the west of the property and the sand-sea in the east. The yardangs are so large and impressive that they can be seen easily from space. Lut is particularly significant for the great variety of desert landform types found in a relatively small area. Key attributes of the aesthetic values of the unspoilt property relate to the diversity and sheer scale of its landforms; a visually stunning mosaic of desert colours; and uninterrupted vistas across huge and varied dune systems that transition into large flat desert pavement areas.

Due to its remoteness from major population centres and its extreme environmental conditions, including extreme heat and lack of water, much of the Lut Desert is inaccessible and therefore naturally protected. Apart from some small private landholdings in villages in the inscribed area and buffer zone of western Lut, the majority of the land within the Lut Desert is state-owned.

Within the property, only the western edge includes settlements (there being 28 villages, the largest with just over 700 people). In the buffer zone there are 15 villages and Shahdad town with a population of nearly 6,000. The region has evidence for habitation going back 7,000 years, however this has always been around the periphery of the area, because the aridity of the property rendered most of it uninhabitable.

Knowledge on the biodiversity and ecological values of the property is limited and would benefit from greater investigation to better understand the linkages between geoheritage, biological and ecological diversity.

The property is subject to a complex and multi-level protection regime and a range of legislation, regulations and protective mechanisms apply (14 legal instruments). Legal protection and management is provided by state level authorities that work under their specific mandates. Three agencies principally share conservation and management responsibility for the property, namely the Forests, Range and Watershed Management Organization; the Iranian Department of Environment; and the Iran Cultural Heritage, Handicrafts and Tourism Organization (ICHHTO). Protection of non-conservation lands, watershed, rangeland management and desertification is under the control of the Organization of Forests, Range and Watershed Management. This agency is responsible for the prevention of illegal exploitation of deserts. Two protected areas located in the northwest and southeast are under the management and protection of the Iranian Department of Environment. The Darband-e Ravar “wildlife refuge” in the northwest partially overlaps with the area but the Bobolab “no hunting” area in the southeast only overlaps with the buffer zone. In addition to management of the protected area, the Department of Environment is responsible for environmental assessment of development projects. The Lut Desert is also on the national heritage registration list of ICHHTO.

The property has a basic management plan at the time of inscription, which needs to be elaborated to detail threats and measures to address these; coordination arrangements for the property; specific management actions, timeframes and responsible agencies for implementation. Establishing and maintaining such a plan is an essential requirement for the protection of the property.

There is also a need to progressively build improved technical capacity to manage the natural values of the Lut Desert in light of the intrinsic links between the property’s geomorphology, geology and its desert adapted biodiversity and ecology, and the relationships to local communities and visitors. Strong measures are required to protect the property from inappropriate tourism and for off road motorized access in the long term. It is also necessary to monitor impacts and undertake restoration of degraded areas in the property, particularly in the northwest where the property includes a number of villages on the outskirts of Shadad and Anduhjerd.