The Los Glaciares National Park is an area of exceptional natural beauty, with rugged, towering mountains and numerous glacial lakes, including Lake Argentino, which is 160 km long. At its farthest end, three glaciers meet to dump their effluvia into the milky grey glacial water, launching massive igloo icebergs into the lake with thunderous splashes. 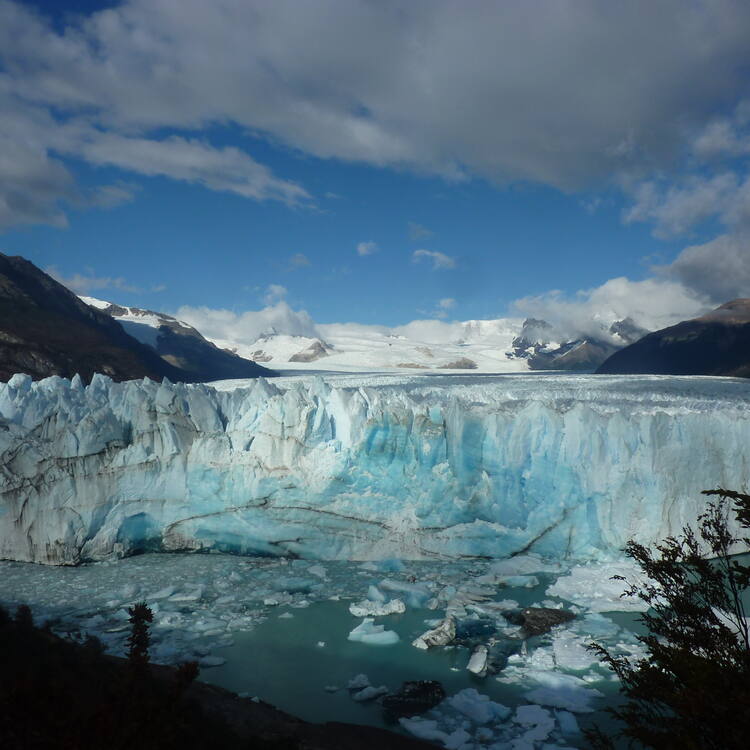 Los Glaciares National Park is located in the Southwest of Santa Cruz Province in the Argentine part of Patagonia. Comprised of a National Park and a National Reserve it has a total surface area of 600,000 hectares. Los Glaciares owes its name to the numerous glaciers covering roughly half of the World Heritage property. Many of these glaciers are fed by the massive South Patagonian Ice Field, the most extensive South American relict of the glaciological processes of the Quaternary Period. In addition, there are impressive glaciers independent of the main ice field. The property therefore constitutes a massive freshwater reservoir.

The Upsala, Onelli and Perito Moreno Glaciers calve into the icy and milky waters of the huge Lake Argentino, which is partly included in the property. The most striking sight is the famous Perito Moreno Glacier. This large glacier blocks a narrow channel formed by Lake Argentino thereby raising the water level temporarily. This in turn causes regular thunderous ruptures of the glacier tongue into the lake.

Criterion (vii) : Los Glaciares National Park is embedded into the enchanted and remote mountain landscape of the Patagonian Andes shared by Argentina and Chile. Dominated by rugged granite peaks exceeding 3000 m.a.s.l. the landscape is modelled by massive, ongoing glaciations. About half of the large property is covered by numerous glaciers, many of which belong to South America's largest ice field. Despite the name's focus on the impressive glaciers there is a remarkable landscape diversity encompassing a large altitudinal gradient of more than 3000 metres and very diverse ecosystems.

The glaciers feed the huge mountain lakes of Viedma and Argentino. The overwhelming beauty of the landscape is epitomized where the Perito Moreno Glacier meets Lake Argentino. The vast front of the slowly and constantly moving glacier, up to 60 metres high, regularly calves bluish icebergs into the waters of Lake Argentino, an audiovisual spectacle attracting visitors from all over the world.

Criterion (viii) : Los Glaciares National Park is an excellent example of the significant process of glaciation, as well as of geological, geomorphic and physiographic phenomena caused by the ongoing advance and retreat of the glaciations that took place during the Pleistocene epoch in the Quaternary period, and the neoglaciations corresponding to the current epoch or Holocene. These events have modelled – and continue to model the landscape of the area and may be recognised by the lacustrine basins of glacial origin, the moraine systems deposited on the plateaux, or by more recent systems pertaining to the current valleys, and, the many large glacier tongues fed by the Ice Fields of the Andes. The property also provides fertile ground for scientific research on climate change.

Los Glaciares National Park is an extensive and fairly well-conserved sample of several types of Andean-Patagonian Forest, Patagonian Steppe and highly specialized high-altitude vegetation. The property provides comprehensive protection for magnificent examples of the large glaciers of Southern Patagonia, as well as related processes. The remoteness, the harsh environmental conditions of the area and the very low level of atmospheric pollution contribute to the integrity of the property, as do the large, contiguous national parks on the Chilean side next to Los Glaciares National Park.

Los Glaciares National Park covers major glaciers and high altitude areas which are difficult to access. This natural protection and the protected area category imply a high level of permanent conservation at a relatively large scale. Adjacent to the East, where the property transitions into the steppes of the lower elevations near the lakes there is a National Reserve divided into three distinct units, "Viedma" in the north, a "Central Zone" and "Zona Roca" to the South. Los Glaciares is situated in the Southern Andes, which are shared with neighbouring Chile. The World Heritage property is adjacent to the two national parks of Torres del Paine and Bernardo O'Higgins on the Chilean side, effectively forming a contiguous protected areas complex of impressive scale stretching across the border.

The integrity of the property is enhanced by its associated cultural and biodiversity values. There is a large altitudinal gradient from around 200 m.a.s.l. all the way to Cerro Fitz Roy at 3,375 m.a.s.l. This magnificent peak is also known as Cerro Chaltén, based on the native Aonikenk word for "smoking mountain". Many place names go back to the Aonikenk, but petroglyphs and other artifacts are reminiscent of even earlier original inhabitants.

Against the backdrop of rugged, towering mountains the main ecosystems are subantarctic or Magellanic forests. Sometimes also referred to as cold Patagonian forests, they are dominated by various species of Southern Beech, some of which display dramatic colours in the autumn of the Southern hemisphere. After a transitional zone of woodland and scrub, the lower elevations further east mark the beginning of the vast semiarid Patagonian steppes. Next to the peaks and glaciers there are highly specified subantarctic xerophytic cushion grasses. The Puma and the elusive Andean Cat, locally known as Guiña, roam the landscape, as does the elusive Huemul, a rare native deer species of the Southern Andes. There is a rich bird fauna, including important breeding populations of the emblematic Andean Condor and Darwin's Rhea, sometimes called the "South American Ostrich" and locally known as Choique.

The property has an impressively long formal conservation history going back to 1937. Los Glaciares National Park is a state-owned unit of the National System of Protected Areas in Argentina (Law No. 22.351 dealing with the National Park Administration), and it was created in 1937 when Law No. 13.895 was enacted, while National Law No. 19.292 of 1971 established the current limits, including the division of the area into a National Park and a National Reserve. Most of the territory of the Magallanes Peninsula, in which the Perito Moreno Glacier is located, is a Provincial Nature Reserve serving as a buffer zone of the property.

The property has specialised administrative and technical staff and park rangers. There is also a fire brigade and support park rangers. While the Superintendence and main administrative office operates in the small town of El Calafate, there are additional units distributed across the property. The Regional Technical Office Patagonia provides professional, scientific and technical assistance.

Management is guided by a preliminary management plan (approved in 1997 by Resolution N° 162). It will require continuous review and updating in response to emerging demands. Since 2002, Los Glaciares National Park established a local Advisory Council bringing together national, provincial and municipal entities, non-governmental organizations, the Chamber of Commerce, the Association of Tourist Guides and a Scout Group among others stakeholders. This Council has an advisory role to the management of Los Glaciares National Park.

While tourism is localized and many parts of the property can only be accessed by mountaineers and climbers there are seasonally crowded areas in the property requiring carful public use planning. The Public Use programme has been updated to fulfil the Restructuring Plan for the Moreno Glacier Sector, due to the increase in tourism and to the fact that it has the most appealing values for visitors. This restructuring included road improvements, planning of visits through a new walkway system, services for visitors, such as restaurants and toilets, in order to improve the property protection and the quality of the visit.

Historically, overgrazing is among the biggest human impacts, in some areas to this day. The management addresses this through agreements for the conversion of cattle‑raising farms to touristic uses. Feral cattle remain in two uninhabited areas, Avellaneda Peninsula and Onelli Bay, and will eventually have to be removed. The latter is part of a programme to control alien invasive species. Other noteworthy introduced species include the European Hare and trout species in the lakes and streams.

Forest fires have likewise had a strong impact in the past leading to the degradation and even destruction of large areas within the property. Removal of livestock and fire prevention will help restoration.

The continuation and consolidation of the Research and Monitoring Programme are required, which include the project to conserve the Huemul Deer, one of the most remarkable species of the park. The latter is a longstanding project with a history of more than two decades and is conducted jointly with neighbouring Chile.