Situated in the centre of France, the property comprises the long Limagne fault, the alignments of the Chaîne des Puys volcanoes and the inverted relief of the Montagne de la Serre. It is an emblematic segment of the West European Rift, created in the aftermath of the formation of the Alps, 35 million years ago. The geological features of the property demonstrate how the continental crust cracks, then collapses, allowing deep magma to rise and cause uplifting at the surface. The property is an exceptional illustration of continental break-up – or rifting – which is one of the five major stages of plate tectonics. 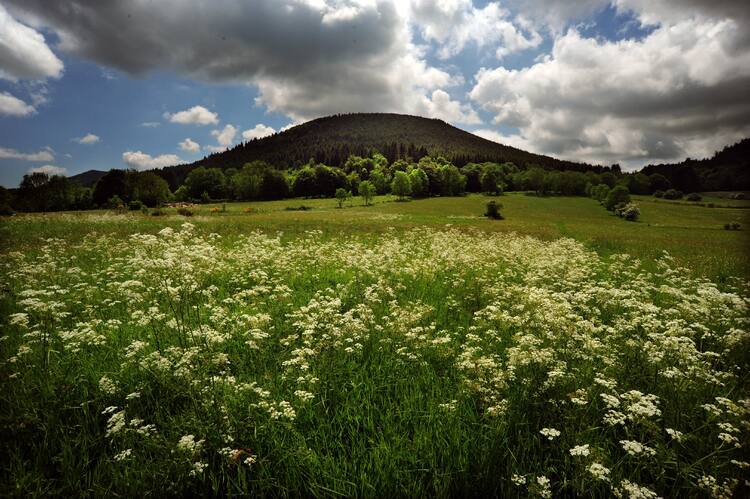 The Chaîne des Puys - Limagne fault tectonic arena, situated in the Auvergne-Rhône-Alpes Region in the centre of France, is an emblematic segment of the West European Rift, created in the aftermath of the formation of the Alps 35 million years ago. The property comprises 24,223 ha with a 16,307 ha buffer zone configured to provide strategic protection in key areas. The boundaries of the property were drawn up to include geological features and landscapes which characterise the tectono-volcanic assemblage and include the long Limagne fault, the scenic alignment of the Chaîne des Puys volcanoes, and the inverted relief of the Montagne de la Serre. Together these demonstrate how the continental crust cracks, then collapses, allowing deep magma to rise, causing widespread uplift at the surface.

The property is an exceptional illustration of the processes and characteristic features of continental break-up, a fundamental phenomenon in the Earth’s history. It is globally significant in terms of its completeness, density and clarity of topographic expression, providing distinctive evidence of the genetic and chronological links between the rifting features. Densely grouped and clearly interconnected, these features provide focused access to a planetary scale geological phenomenon and its overall understanding.

Criterion (viii): Continental drift, manifested through plate tectonics, is an essential paradigm for the history of the Earth as it explains the current make-up of oceans and continents and their past and future movements. The property is an exceptional illustration of the phenomenon of continental break-up, or rifting, which is one of the five major stages of plate tectonics. The Chaîne des Puys - Limagne fault tectonic arena presents a coincident view of all the representative processes of continental break-up and reveals their intrinsic links. The geological formations of the property, and their specific layout, illustrate with clarity this planet-wide process and its effects on a large and small scale on the landscape. This concentration has a demonstrated global significance in terms of its completeness, density and expression and has contributed to the site’s prominence since the 18th century for the study of classical geological processes.

Due to its size, continental break-up creates rift systems several thousands of kilometres long. The property’s boundary incorporates all the elements necessary for a full presentation of this process. All the most impressive and best preserved examples are included in relatively close proximity.

The property includes the most impressive section of the fault, which forms a marked border between the flattened continental basement and the wide adjoining graben. It also contains a young volcanic field, relatively unaffected by erosion, exhibiting the complete spectrum of typical magmas in rift zones. Lastly, the long lava flow of the Montagne de la Serre, from an earlier phase of volcanism, straddles the basement and the sedimentary basin, which it overlooks. This inverted topography is a characteristic indicator of the wide-spread uplift which affects rift zones.

The landscape setting for the property’s geological attributes has a long history of conservation measures; it is sparsely inhabited, with the main population being concentrated on the adjacent Limagne Plain. The geological features encompassed by the property’s boundary are fundamentally intact: they are preserved from urbanisation; the erosion is very superficial and has not altered the structures; and past quarrying activity has affected only a minor part of the property. Overall, human impact remains limited and does not compromises the geological value of the Chaîne des Puys - Limagne fault tectonic arena concerning the integrity of the property in relation to criterion (viii).

The property has been subject to management and preservation measures for nearly one hundred years, under the impetus of local actors and supported by the State. Critical to protecting the property’s Outstanding Universal Value is preventing any degradation to the geological features and maintaining, even accentuating, their visibility in the landscape. The main potential threats are thus the quarries, urbanisation, encroachment of forest masking the geological features, and erosion of soils linked to human action. All of these threats are managed via a combination of regulatory measures, an integrated management plan, and the availability of dedicated human and financial means.

The property is part of the Auvergne Volcanos Regional Natural Park (IUCN Cat.V protected area) which provides a management framework legally subject to review and renewal every 12 years. The property is subject to strong national legislature which applies to both public and private land and prohibits in particular the opening of any new quarries, mandates State authorization for any changes to the site, and prohibits or strictly limits construction. In addition there are local regulations which reinforce and add greater precision to these environmental, landscape and urban protection measures. Continued efforts should be directed toward engaging with private landholders to raise awareness, ensure compliance with regulations and incentivize good stewardship practice.

Proactive management measures are also applied to the property through a tailored management plan which is focused towards the preservation of the geological features and their clarity of outline, management of visitor numbers, enabling traditional local activities, and interpreting the property’s Outstanding Universal Value to the public.

Care is needed to manage the balance between forest cover and pasture when seeking to optimize the exposure of the property’s geological features. It is important to ensure the property is protected against erosion and visitor impact.