Situated in the southern Minas Basin of Nova Scotia, the Grand Pré marshland and archaeological sites constitute a cultural landscape bearing testimony to the development of agricultural farmland using dykes and the aboiteau wooden sluice system, started by the Acadians in the 17th century and further developed and maintained by the Planters and present-day inhabitants. Over 1,300 ha, the cultural landscape encompasses a large expanse of polder farmland and archaeological elements of the towns of Grand Pré and Hortonville, which were built by the Acadians and their successors. The landscape is an exceptional example of the adaptation of the first European settlers to the conditions of the North American Atlantic coast. The site – marked by one of the most extreme tidal ranges in the world, averaging 11.6 m – is also inscribed as a memorial to Acadian way of life and deportation, which started in 1755, known as the Grand Dérangement. 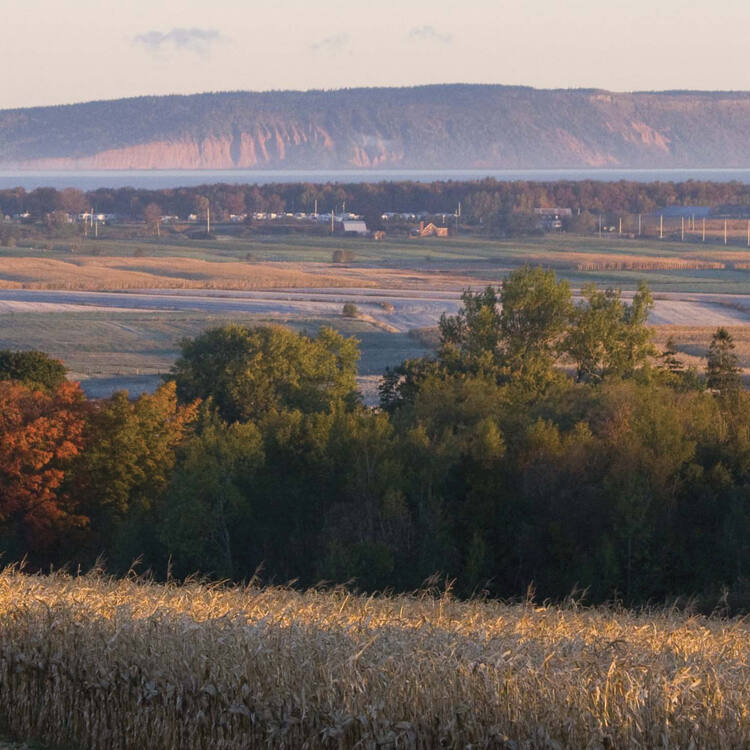 The Grand Pré ‘marshland’ and the remains of the associated old villages constitute a cultural landscape bearing testimony to a remarkable effort, over many centuries, using the polder technique to develop agricultural farmland, in a maritime location with extreme tides. In particular, it demonstrates the permanency of its hydraulic drainage system using dykes and aboiteaux and its agricultural use through a community-based management system established by the Acadians and then taken over by the Planters and their modern successors. Grand Pré is also testimony to the history of the Acadians in the 17th and 18th centuries and their deportation.

Grand Pré forms a vast area of polders or marshlands, in which the land division and crop farming methods have continued for three centuries. It is the most important example of its type in North America. The farming landscape is complemented by the strip land division method along the coastal area, bearing testimony to 17th century French colonization. The hydraulic system is based on an exemplary ensemble of dykes, aboiteaux to evacuate the water, and a drainage network. These techniques and community-based management have continued through to today. The property includes archaeological remains of the villages of Grand Pré and Hortonville that testify to the settlements and lifestyles of the Acadian settlers and their successors. The property and its landscape include traces of the major pathways that crossed the marshland and organized the adjacent coastal area. The locations of Grand Pré village and Horton Landing have memorial buildings and monuments erected in the 20th century in homage to the Acadian ancestors and their deportation, starting in 1755. The overall property forms the symbolic reference landscape for the Acadian memory and the main site for its commemoration.

Criterion (v): The cultural landscape of Grand Pré bears exceptional testimony to a traditional farming settlement created in the 17th century by the Acadians in a coastal zone with tides that are among the highest in the world. The polderisation used traditional techniques of dykes, aboiteaux and a drainage network, as well as a community-based management system still in use today. The resultant rich alluvial soil enabled continuous and sustainable agricultural development.

Criterion (vi): Grand Pré is the iconic place of remembrance of the Acadian diaspora, dispersed by the Grand Dérangement, in the second half of the 18th century. Its polder landscape and archaeological remains are testimony to the values of a culture of pioneers able to create their own territory, whilst living in harmony with the native Mi’kmaq people. Its memorial constructions form the centre of the symbolic re-appropriation of the land of their origins by the Acadians, in the 20th century, in a spirit of peace and cultural sharing with the English-speaking community.

The conditions of integrity of the material and landscape ensemble formed by the property are met, as well as for the memorial and symbolic values. However, the coastal instability due to the tidal currents makes this integrity fragile in the long term. Also, the possibility of wind farm projects being developed in the maritime and coastal environment could also affect it.

The property’s protection measures are appropriate and they are effective because they correspond to clear directions and choices that are well accepted by both the inhabitants and the Acadian diaspora. They are applied to the main place of remembrance by the Federal Government’s Parks Canada Agency, and elsewhere by the other stakeholders in the property’s practical management: regional technical authorities, the municipality, the Grand Pré Marsh Body and farmers. The maritime component of the buffer zone has been extended to guarantee the visual integrity of the property viewed from the coastal area of the old village of Grand Pré at Horton Landing.

The property’s management system is in place and acts effectively. It involves a series of specialist entities, either public, such as the Federal Parks Canada, provincial, or traditional bodies such as the Grand Pré Marsh Body. Overarching coordination of the various stakeholders has been confirmed by the implementation of the Stewardship Board and its personnel, together with a schedule for the implementation of actions programmed in the Management Plan. The property’s memorial dimension is handled by the Société Promotion Grand Pré.