The List Archaeological Heritage of the Lenggong Valley
Print

Archaeological Heritage of the Lenggong Valley

Archaeological Heritage of the Lenggong Valley

Situated in the lush Lenggong Valley, the property includes four archaeological sites in two clusters which span close to 2 million years, one of the longest records of early man in a single locality, and the oldest outside the African continent. It features open-air and cave sites with Palaeolithic tool workshops, evidence of early technology. The number of sites found in the relatively contained area suggests the presence of a fairly large, semi-sedentary population with cultural remains from the Palaeolithic, Neolithic and Metal ages. 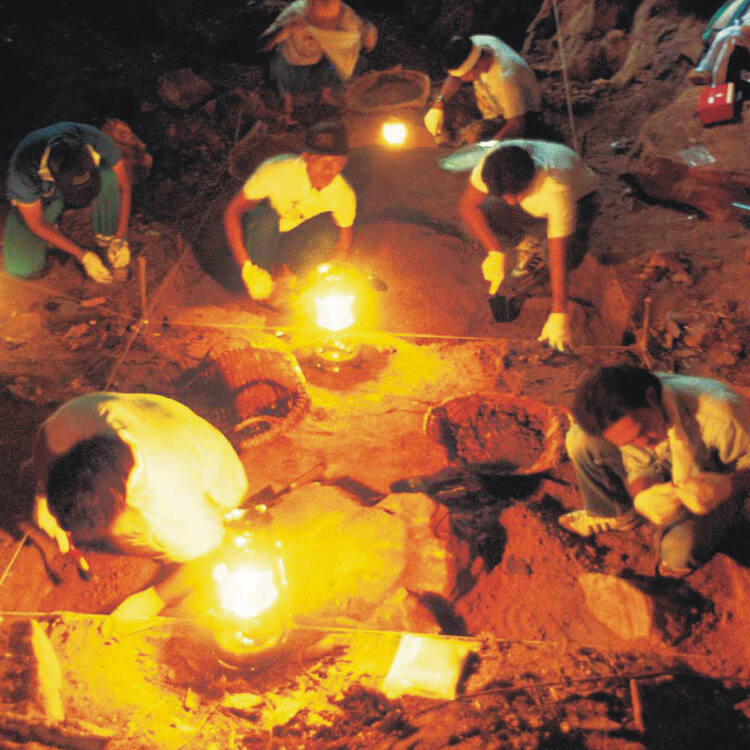 The lush Lenggong Valley on the Malay Peninsula contains evidence in open-air and cave sites along the Perak River spanning all the periods of hominid history outside Africa from 1.83 million to 1,700 years ago.

Undisturbed in situ Palaeolithic stone tool workshops are located on the shores of a paleolake and ancient river gravel beds and dated in a long chronological sequence.

A meteorite strike 1.83 million b.p. blocked and diverted the river preserving Palaeolithic tools at Bukit Bunuh, where hand axes are among the oldest so far discovered outside Africa. Analysis suggests these were made by hominids which thus provide an extremely early date for hominid presence in South-East Asia.

The relative abundance of these sites hints at a relatively large or semi sedentary population.

Perak Man was discovered within Gua Gunung Runtuh cave. Perak Man is South-East Asia’s oldest most complete human skeleton. It is radiocarbon dated to 10,120 BP and identified as Australomelanesoid, a hominid type occupying the western part of the Indonesia archipelago and continental South-East Asia at the end of the Pleistocene and early Holocene.

Together these four sites in two clusters sites represent the sequence of significant stages in human history unrivalled in the region.

Criterion (iii) : The series of cave and open air sites along the Perak River in the Lenggong Valley is an exceptional testimony to occupation of the area particularly during the Palaeolithic era, but also during the Neolithic and Bronze Age periods from 1.83 million years ago to 1,700 years ago.

Criterion (iv) : The undisturbed in situ Palaeolithic stone tool workshops located on the shores of a paleolake and ancient river gravel beds and dated in a long chronological sequence are an outstanding ensemble of lithic technology.

The Lenggong Valley has provided a fertile and environmentally stable habitat for repeated human occupation since early Palaeolithic times. The archaeological deposits are relatively undisturbed and generally in good condition, largely due to low visitation. The visual integrity is impacted by the current industrial agricultural plantations. The property contains all the elements necessary to express its values. However the whole valley holds the potential for further discoveries.

The authenticity of the property relates to the intactness of the sites themselves and of their landscape setting that allows understanding of ancient river gravel beds and the impact of meteoric impact. The documented evidence supports the values claimed for this site from 1.83 million to 1,700 years ago. The recent (post 1987) Lenggong Valley research relating to the story of early human migration ensures the reliability and authenticity of the property. Much of the documentation has been independently peer reviewed through the academic publishing process, albeit not yet on a fully international scale. The artefacts and research are available for study.

All designated sites within the property are expected to be registered under the National Heritage Act 2005 and gazetted by 2012. The property is protected under the National Land Code 1965 and the Town and Country Planning Act 1976, where any removal of soil, rocks and minerals as well as development activities require approval from State and Local Governments. The Special Area Plan currently being prepared will further refine protection measures for the property and buffer zones under the Town and Country Planning Act.

The property including all components is managed by the Lenggong District Council (the local authority) with the co-operation of the Department of National Heritage (which is ultimately responsible for the nationally registered sites), and with the occasional assistance of the Centre for Global Archaeological Research, University of Science Malaysia.

A Heritage Steering Committee chaired by the Chief Minister of the State of Perak, with members representing Federal, State and Local governments and independent expert members, will cover all aspects of implementation of the Property Management Plan including fundraising. The Committee will be advised as to implementation of the work plan by a Heritage Technical and Scientific Committee, chaired by the District Officer. The District Council’s Heritage Unit will be upgraded to become the World Heritage Office headed by a General Manager, the staff of which will implement the work plan with external assistance from the University of Science Malaysia and others as required.

The Property Management Plan for the Archaeological Heritage of the Lenggong Valley needs to be completed, approved by all parties concerned and then the Plan will set out objectives including the development of tourism and visitor management strategies, risk management strategies and provision for stakeholder participation and collaboration.

In order to manage any increases in visitors, more active conservation needs to be undertaken to manage visitor impacts on the sites, to prevent graffiti and to address pressure for the development of tourism facilities in the buffer zone.

Responses to other potential threats, such as change of land use, housing development, and quarrying activities, need to be addressed through specific measures in the Management plan and the introduction of appropriate protection measures in planning policies.