Lena Pillars Nature Park is marked by spectacular rock pillars that reach a height of approximately 100 m along the banks of the Lena River in the central part of the Sakha Republic (Yakutia). They were produced by the region’s extreme continental climate with an annual temperature range of almost 100 degrees Celsius (from –60 °C in winter to +40 °C in summer). The pillars form rocky buttresses isolated from each other by deep and steep gullies developed by frost shattering directed along intervening joints. Penetration of water from the surface has facilitated cryogenic processes (freeze-thaw action), which have widened gullies between pillars leading to their isolation. Fluvial processes are also critical to the pillars. The site also contains a wealth of Cambrian fossil remains of numerous species, some of them unique. 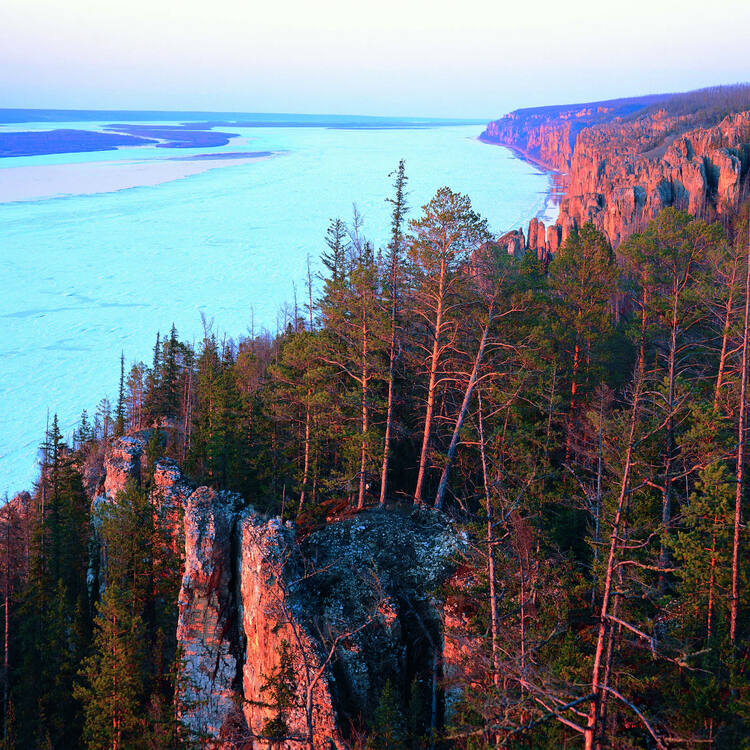 The Lena river is covered with ice till June. © PENTA Ltd. Publishing House

Comprising a vast area of 1,387,000 ha, the property of the Lena Pillars Nature Park occupies the right bank of the middle part of Lena River in the Republic of Sakha (Yakutia) of the Russian Federation. The Lena Pillars Nature Park displays two features of significant international interest in relation to the Earth sciences. The large cryogenically modified pillars in the region are the most notable pillar landscape of their kind known, whilst the internationally renowned and important exposures of Cambrian rocks tell us key stories about our planet and the early evolution of life during the entire Cambrian Explosion, and the story of the emergence of the frozen ground karst phenomenon.

Criterion (viii): The Lena Pillars Nature Park displays two features of significant international interest in relation to the Earth sciences. The large cryogenically modified pillars in the region are the most notable pillar landscape of their kind known, whilst the internationally renowned and important exposures of Cambrian rocks provide a second and important supporting set of values.

The celebrated pillars (up to c.200m in height) that line the banks of the Lena River are rocky buttresses isolated from each other by deep and steep gullies developed by frost shattering directed along intervening joints. The pillars form an outstanding discontinuous belt that extends back from the river’s edge along the incised valley sides of some rivers in a zone about 150 m wide.

The Lena Pillars Nature Park property contains among the most significant record of events related to the ' Cambrian explosion ' which was one of the pivotal points in the Earth’s life evolution. Due to platformal type of carbonate sedimentation within the tropical belt of the Cambrian Period, without subsequent meta­morphic and tectonic reworking, and magnificent impressive outcrops, the property preserves an exceptionally continuous, fully documented, and rich record of the diversification of skeletal animals and other biomineralised organisms from their first appearance until the first mass extinction event they suffered.  The Lena Pillars include among the earliest and the largest, in both tem­poral and spatial senses, fossil metazoan reef of the Cambrian world. The Lena Pillars shows exceptional processes of the fine disintegra­tion of the rocks dominating the shaping of the carbonate pillar relief. These karst phenomena are enriched by thermo­karst processes developed in the area of a great permafrost thickness (up to 400-500 m).

The property has clear boundaries, which include significant stretches of pillars, and the main Cambrian fossil remains of the region. It is noted that the Sinyaya component of Lena Pillars Nature Park,  that is necessary to strengthen the integrity within the property, could be considered for future inclusion in the property.

Through its size (1 387 000 ha) the property is large enough to support the func­tioning of nature complexes and to ensure the complete representation of the features and processes which convey its significance. Besides, local and republican resource preserves adjacent to the Park’s boundaries give additional integrity guarantees for the nominated property.

The biophysical processes and landform features of the property are intact. Natural ecosystems, numerous nature monuments, and also evidence of human activity from ancient times have been sustainably preserved over a long period of time. Protection of the natural processes of the Lena River that maintain the values of the property is required.

The area of the "Lena Pillars Nature Park" has passed a long and complex period of geological development since Early Cambrian. The property reflects both significant geological processes of surface development and outstanding geomorphological relief features. The significant relief and landforms of the property are interrelated and interdepen­dent elements in their natural relationships.

Lena Pillars Nature Park was established by the Resolution of the Government of the Republic of Sakha (Yakutia) in 1995. The property has the status of a Nature Park of the Republic Sakha and is owned by the Sakha Republic. There are some land parcels traditionally used by Evenki indigenous people. The boundaries of the land are well known and their validity is respected by the park administration. Limited traditional use of the land includes hay-making and hunting. Co-existence of traditional rights and use, and legal land ownership appears to be appropriately considered.

Lena Pillars Nature Park possesses the status of a non-profit legal entity and established in the form of state-operated nature conservation institution and financed by the state budgetary funds from the Sakha Republic. Legal instruments for the protection of the property are determined by the regulations of the Nature Park (referred as the “Statute of the State Enterprise Lena Pillars Nature Park” 2006 in the Annex B5 of the nomination document) confirmed by the Government of the Sakha Republic. The territory of the nature park is zoned and includes areas termed reserved zone, sacred places, restricted and active recreational zones, traditional nature management zone and zone of breeding for rare and extinct animals.

The whole territory in the limits of the Lena Pillars Nature Park is provided with professional guarding by the Park administration and the staff on the basis of laws and decrees of the Governments of the Russian Federation and the Republic of Sakha.

The property has an active management plan that is kept updated. This plan was developed in accordance with the Direction of the Ministry of Natural Resources of the Russian Federation. It identifies primary goals of the park and proposes activities on protection, scientific research, environmental education and recreation. The document is adequately guiding the management of the nominated property. The plan defines the sources of financing, which are mainly from the regional budget with a minor contribution from self-generated revenue. The total annual budget of the park appears to be adequate to conduct nature conservation, patrolling and monitoring activities, but it may need to be increased in the future. Lena Pillars Nature Park has a personnel of c.40 including state environmental inspectors, education and tourism specialists, and a range of administration and support staff.

A  long-term strategy needs to be developed that would balance the increasing trend in tourism in one hand whilst respecting the capacity of the area, and realizing benefits to local communities.

Traditional nature management and licensed use of biological resources by local residents from eight communities of small nationalities of the North inhabiting the Park territory (and absolute absence of permanent settlements) ensure the conditions for con­servation of nature monuments and biological diversity of ecosystems of the concerned territory.