Hiraizumi - Temples, Gardens and Archaeological Sites Representing the Buddhist Pure Land comprises five sites, including the sacred Mount Kinkeisan. It features vestiges of government offices dating from the 11th and 12th centuries when Hiraizumi was the administrative centre of the northern realm of Japan and rivalled Kyoto. The realm was based on the cosmology of Pure Land Buddhism, which spread to Japan in the 8th century. It represented the pure land of Buddha that people aspire to after death, as well as peace of mind in this life. In combination with indigenous Japanese nature worship and Shintoism, Pure Land Buddhism developed a concept of planning and garden design that was unique to Japan. 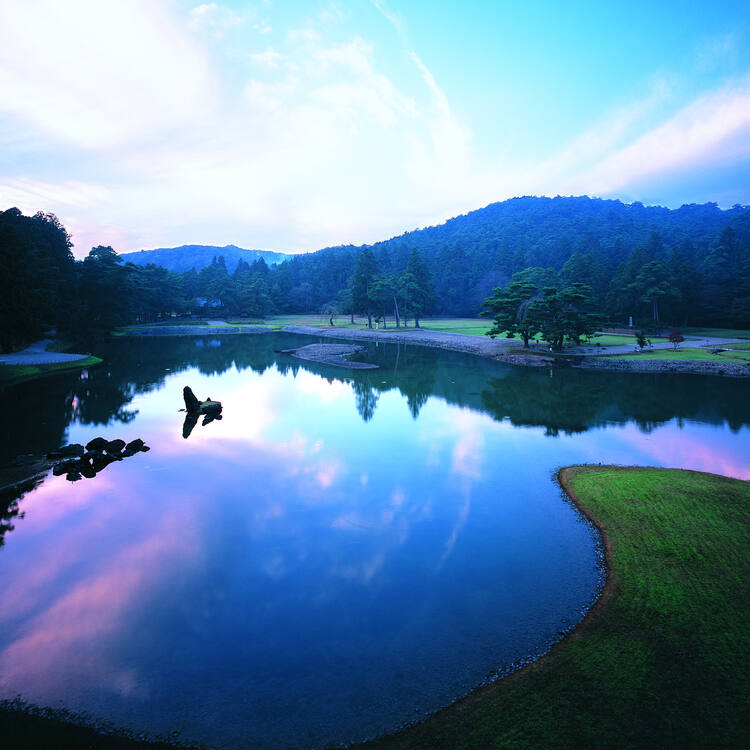 The four Pure Land gardens of Hiraizumi, three focused on the sacred mountain Mount Kinkeisan, exemplify a fusion between the ideals of Pure Land Buddhism and indigenous Japanese concepts relating to the relationship between gardens, water and the surrounding landscape. Two gardens are reconstructed, with many details recovered from excavations, and two remain buried.  The short-lived city of Hiraizumi was the political and administrative centre of the northern realm of Japan in the 11th and 12th century and rivalled Kyoto, politically and commercially.  The four gardens were built by the Ôshû Fujiwara family, the northern branch of the ruling clan, as symbolic manifestations of the Buddhist Pure Land on this earth, a vision of paradise translated into reality through the careful disposition of temples in relation to ponds, trees and the peaks of Mount Kinkeisan. The heavily gilded temple of Chûson-ji - the only one remaining from the 12th century -, reflects the great wealth of the ruling clan.

Much of the area was destroyed in 1189 when the city lost its political and administrative status. Such was the spectacular rise and conspicuous wealth of Hiraizumi and its equally rapid and dramatic fall, that it became the source of inspiration for many poets. In 1689, Matsuo Basho, the Haiku poet, wrote: 'Three generations of glory vanished in the space of a dream...'.  The four temple complexes of this once great centre with their Pure Land gardens, a notable surviving 12th century temple, and their relationship with the sacred Mount Kinkeisan are an exceptional group that reflect the wealth and power of Hiraizumi, and a unique concept of planning and garden design that influenced gardens and temples in other cities in Japan.

Criterion (ii): The temples and Pure Land gardens of Hiraizumi demonstrate in a remarkable way how the concepts of garden construction introduced from Asia along with Buddhism evolved on the basis of Japan's ancient nature worship, Shintoism, and eventually developed into a concept of planning and garden design that was unique to Japan. The gardens and temples of Hiraizumi influenced those in other cities, notably Kamakura where one of the temples was based on Chûson-ji.

Criterion (vi): The Pure Land Gardens of Hiraizumi clearly reflect the diffusion of Buddhism over south-east Asia and the specific and unique fusion of Buddhism with Japan's indigenous ethos of nature worship and ideas of Amida's Pure Land of Utmost Bliss. The remains of the complex of temples and gardens in Hiraizumi are symbolic manifestations of the Buddhist Pure Land on this earth.

The property encompasses the remains of the temple complexes with their Pure Land Gardens and the sacred mountain of Mount Kinkeisan to which they are visually aligned. Although the sites of Chûson-ji, Môtsû-ji, Kanjizaiô-in Ato and Mount Kinkeisan conserve their visual links in a complete manner, at the Muryôko-in site, houses and other structures have a negative influence. The visual links between the temples and Mount Kinkeisan span areas outside the property in the buffer zone. To protect the spatial landscape relating to Pure Land cosmology, the spatial integrity of these links need to be sustained.

There is no doubt of the authenticity of the excavated remains. Two of the gardens have been reconstructed and this work has been underpinned by rigorous analysis of the built and botanical evidence.  For the surviving structures, the main building Chûson-ji Konjikidô is a remarkable survival and has been conserved with great skill in a way that ensures its authenticity of materials and construction. The authenticity of the temple in its landscape has to a certain extent been compromised by the concrete sheath building that now surrounds it.  To sustain the ability of the property to convey its value, it is essential that the four temples are able to convey in an inspiring way their association with the profound ideals of Pure Land Buddhism.

The property and its buffer zone are well protected through a range of designations - Historic Sites, Special Historic Sites, Places of Scenic Beauty or Special Places of Scenic Beauty.  Protecting views between sites and protecting their setting will be crucial to ensure that the sites have the ability to demonstrate their relationship with the landscape in a meaningful way though allowing them to be oases of contemplation.  Iwate Prefecture and the relevant municipal government have set up the Iwate Prefecture World Heritage Preservation and Utilization Promotion Council to provide the overall management framework for the property. This Council receives expert advice from the Instructing Committee for Research and Conservation of the Group of Archaeological Sites of Hiraizumi.

The Comprehensive Preservation and Management Plan was completed and implemented in January 2007, and revised in January 2010. Any projects to implement proposals in the plan to re-instate and restore the other two buried gardens will need to be submitted to the World Heritage Centre for evaluation by ICOMOS, and consideration by the World Heritage Committee, in line with paragraph 172 of Operational Guidelines for the Implementation of the World Heritage Convention. The local government has signed an agreement with the local institutions and invited the local community to patrol the property and offer suggestions on protection, management and presentation. 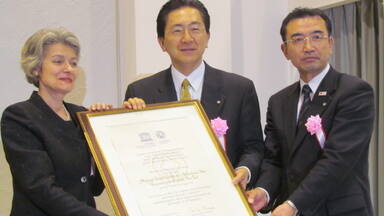