Built between 1747 and the early 19th century to the design of Guatemalan architect Diego José de Porres Esquivel, the monument expresses the transition from Baroque to Neoclassical architecture and its style can be considered to be eclectic. The Cathedral is characterized by the sobriety of its interior decoration and the abundance of natural light. The vault of the Sanctuary, however, presents rich ornamentation. The Cathedral houses important works of art including a wooden Flemish altarpiece, and paintings of the 14 stations of the Way of the Cross by Nicaraguan artist Antonio Sarria (late 19th and early 20th centuries). 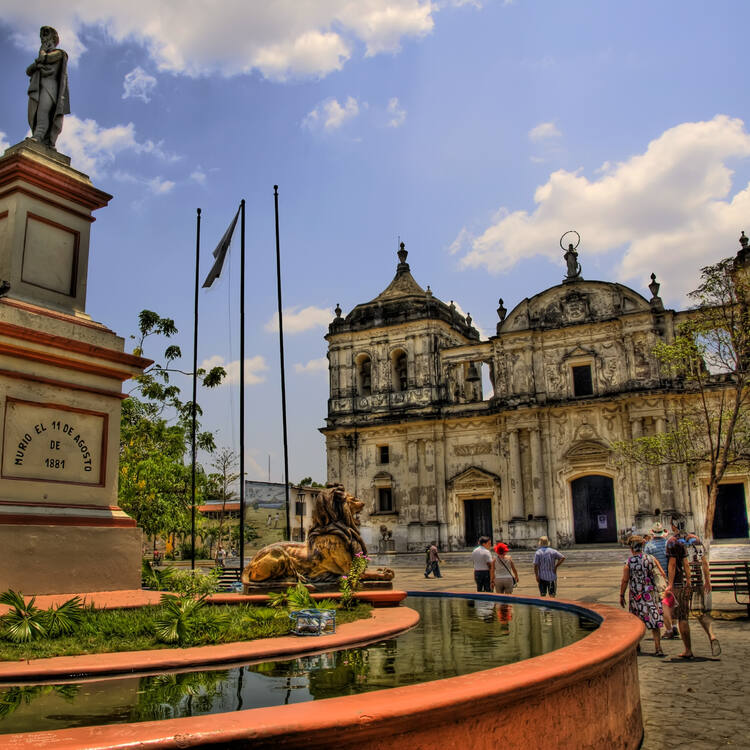 Constructed between 1747 and the early 19th century, León Cathedral merges a basilica rectangular layout of Spanish derivation with regional architectural proportions and features. Stylistically, the monument shows the transition from late Baroque to Neo-Classic with sober decoration.

León Cathedral exceptionally illustrates the Antigua Guatemala Baroque architectural style and, in its combination of Spanish art and regional features, shaped by the geographical environment and the groups that supported its erection, is a material expression of the formation of the Latin American society.

The application of the typical quadrangular layout of Spanish origin is outstandingly integrated with architectural features coming from both European Baroque and Neo-classical styles and Antigua Guatemalan interpretation. Among the Antigua features are the mainly horizontal proportions and the low and thick towers as a response to earthquakes, and the internal and external decoration.

Criterion (ii): León Cathedral is an outstanding example of an exchange of human values demonstrated by the different architectural influences from Spanish Art that merge in the monument, shaped by the local workmanship and the geographical and social environment. León Cathedral materially encapsulates the social, religious and artistic syncretism of the new Latin American society appearing during the 18th century.

Criterion (iv): León Cathedral constitutes an outstanding example of a regional Central American interpretation of a typology of religious building merging several architectural and stylistic sources in an ensemble featured by its unity and architectural and social significance.

León Cathedral has been properly conserved, it is intact and, although subject to repair and maintenance, has not had extensive alteration.

Authenticity is maintained by the permanence of the original plan, materials, functions, social significance and relationships with the urban setting.

The property is adequately protected by national and municipal legislation and regulations but the protection of the buffer zone awaits the approval of the Development Municipal Plan and corresponding enforcing legal instruments.  The management of the nominated property is the responsibility of a number of public and private institutions. Namely the León's Diocese, which is also the owner, the National Institute for Culture (INC), responsible for conservation and promotion of national culture, the Department of the Historic Centre of León Municipality, responsible for the protection and preservation of the historic centre and its main buildings. A Management Plan for León Cathedral was prepared and approved by the National Institute for Culture (INC 2009) but it awaits official approval from the Diocese and the Municipality and integration with a risk preparedness plan. The Development Municipal Plan, the approval of which is under finalization, is the comprehensive instrument envisaged by the State party for the development, revitalisation and management of the city. The Plan integrates all other existing plans, including the Cathedral Management Plan and the Plan for the Historic Centre of León.