Built in 1948, the House and Studio of architect Luis Barragán in the suburbs of Mexico City represents an outstanding example of the architect’s creative work in the post-Second World War period. The concrete building, totalling 1,161 m2, consists of a ground floor and two upper storeys, as well as a small private garden. Barragán’s work integrated modern and traditional artistic and vernacular currents and elements into a new synthesis, which has been greatly influential, especially in the contemporary design of gardens, plazas and landscapes. 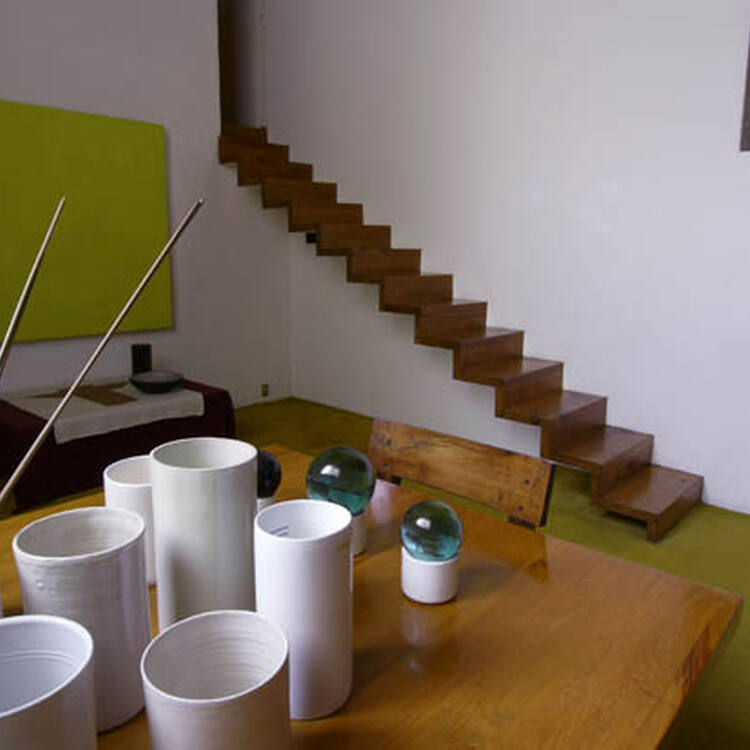 Built in 1947-1948, the Luis Barragán House and Studio located in a working class suburb of Mexico City represents an outstanding example of the architect’s creative work in the post-Second World War period. Barragán created a regional adaptation of the International Modern Movement in architectural design. The concrete building, totalling 1,161 square metres, consists of a ground floor and two upper storeys, as well as a small private garden. The architect’s integration of modern design with traditional Mexican vernacular elements has been greatly influential, especially in the contemporary design of gardens. For example, his use of water and fountains reflects Mediterranean and Islamic traditions, in particular Moroccan.

The house and studio of Luis Barragán owes its singularity to being a personal and therefore unique reflection of its designer. This autobiographical background did not prevent this artist manifesto from going well beyond its time and its cultural milieu and becoming a distinguished reference in 20th century fine art and architecture. Of particular note is the profound dialogue between light and constructed space and the way in which colour is substantial to form and materials. It is a house which appeals to all the senses and re-evaluates the ways in which architecture can be perceived and enjoyed by its inhabitants. Many of its materials were found in traditional architecture and, distant as they are from industrial production, they reveal the aging of the house with a patina which the architect acknowledged as the poetic value of his architecture.

Criterion (i): The House and Studio of Luis Barragán represent a masterpiece of the new developments in the Modern Movement, integrating traditional, philosophical and artistic currents into a new synthesis.

Criterion (ii): The work of Luis Barragán exhibits the integration of modern and traditional influences, which in turn have had an important impact especially on the design of gardens and urban landscapes.

The house and studio that comprise the inscribed property occupy two adjacent lots, numbers 12 and 14 of General Francisco Ramirez Street. The architect lived and worked here until his death in 1988 and he determined and supervised any modifications. Luis Barragán believed that ‘a house is never finished; it is an organism in constant evolution’. The value of the property’s integrity resides in the fact that these modifications represent an autobiographic document of the artist and the evolution of his ideas. Moreover it is conserved in its entirety including kitchen installations and the owner’s Cadillac.

The property itself was considered to be in a reasonable state of conservation at the time of inscription (2004). Specific threats relate to insufficient planning controls, increased traffic in the surrounding neighbourhood, and uncontrolled development specifically linked to high-rise construction within the buffer zone. Such development will have a negative impact on the character of the house which is introverted and intimate. It will also affect its visual integrity, in particular views from the garden and terraces. Additional risks to the property include earthquakes and fire. Regular inspections and preventative measures are required.

The House and Studio of Luis Barragán are conserved with great respect, including not only the structure, materials, furniture, objects, art collections, garden and library, but also the kitchen installations. Conservation is extended to the various changes that have occurred over time. In this sense, the property certainly meets the test of authenticity. Occupied by the architect until his death, the house and studio are currently a museum and are open to the public.

In November 1988, the Mexican Government declared the House and Studio of Luis Barragán an Artistic Monument requiring all conservation and restoration work carried out must be authorized by the Instituto Nacional de Bellas Artes y Literatura (National Institute of Fine Arts and Literature). The protection of the house was completed prior to inscription and the additional protection of the studio is in process according to the State Party. This declaration extends to any excavations, foundations, conservation work or demolitions carried out by owners of properties adjacent to the monument.

The museum is managed by the Luis Barragán Foundation of Guadalajara Architecture, a non-governmental body that, along with the museum administration and INBA, is responsible for preserving the integrity and authenticity of the property. Since 1994, restoration has been the responsibility of Andrés Casillas de Alba, a disciple and close collaborator of Luis Barragán. Annual work plans provide sufficient care for the property and a 22.9-hectare buffer zone surrounds the property on three sides.