A landscaped park of 559.9 ha astride the Neisse River and the border between Poland and Germany, it was created by Prince Hermann von Puckler-Muskau from 1815 to 1844. Blending seamlessly with the surrounding farmed landscape, the park pioneered new approaches to landscape design and influenced the development of landscape architecture in Europe and America. Designed as a ‘painting with plants’, it did not seek to evoke classical landscapes, paradise, or some lost perfection, instead using local plants to enhance the inherent qualities of the existing landscape. This integrated landscape extends into the town of Muskau with green passages that formed urban parks framing areas for development. The town thus became a design component in a utopian landscape. The site also features a reconstructed castle, bridges and an arboretum. 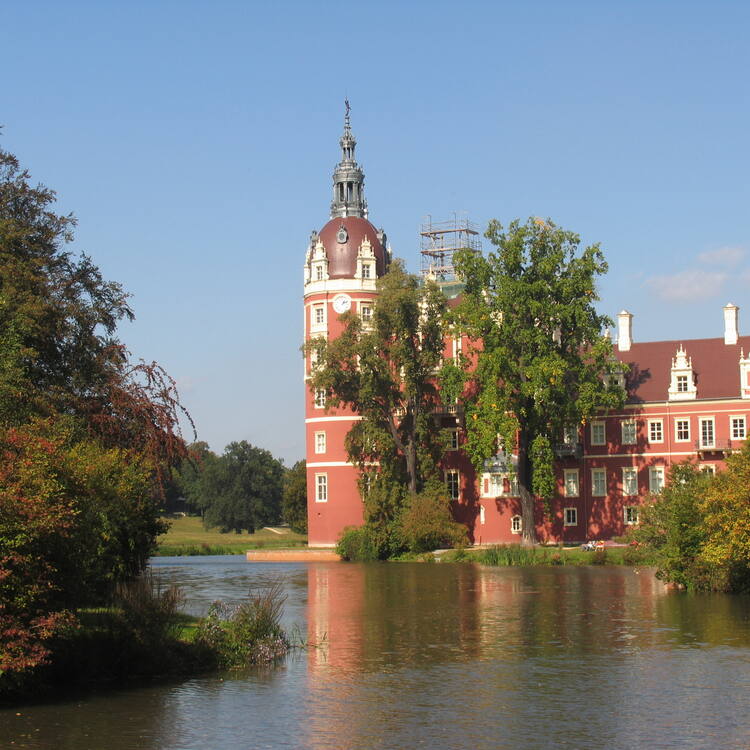 Muskauer Park / Park Mużakowski is an extensive landscape initially developed between 1815 and 1844 by Prince Hermann von Pückler-Muskau on the grounds of his estate, and continued by his student, Eduard Petzold. Set harmoniously in the river valley of the Lusatian Neisse, the park’s integration into the local town and surrounding agricultural landscapes heralded a new approach to landscape design and contributed to the advancement of landscape architecture as a discipline. The extensive site includes the river Neisse, other water features, human-made and natural, bridges, buildings, forested areas, and paths. It is an example of a cultural landscape in which the site’s natural attributes have been harnessed with the utmost skill.

The park is of the highest aesthetic quality and its composition blends fluidly with the naturally-formed river valley. Its essence is the visual relationship between the central residence, the New Castle, and a series of topographical focal points comprising ideal vantage points laid out along riverside terraces flanking the valley, each of which forms part of a masterfully fashioned network of vistas. Pückler incorporated human-made architectural elements into this network along with natural components, including the terrain’s geological features. It is distinctive with its extraordinary simplicity and expansiveness.

The property encompasses the central portion of this extensive landscape composition measuring 348 ha (136.10 ha in Germany and 211.9 ha in Poland). The remaining part of the composition falls within the surrounding buffer zone of 1,205 ha.

Pückler laid the foundations of integrated landscape design with the extension of the park into the town of Bad Muskau through green passages and urban parks. The incorporation of the community into the overall composition, as a key component in his planned utopian landscape, had a great impact on contemporary town planning, particularly in the United States (as illustrated by the green areas of the city of Boston) and on the development of the landscape architecture profession. Pückler published his principles of landscape design theory in Andeutungen über Landschaftsgärtnerei (1834). Moreover, the training of landscape gardeners by Prince von Pückler and his student Eduard Petzold helped create skill standards which influenced the work of other gardeners and planners. This training tradition has been revived in recent times by the creation of the Muskauer School, as an international school for the training in garden and cultural landscape maintenance.

Criterion (i): Muskauer Park / Park Mużakowski is an exceptional example of a European landscape park that broke new ground in terms of development towards an ideal human-made landscape.

Criterion (iv): Muskauer Park / Park Mużakowski was the forerunner for new approaches to landscape design in cities, and influenced the development of landscape architecture as a discipline.

The boundary of the property encompasses the core zone of this extensive landscape including, in their entirety, all of the most important features from the original concepts devised by Prince von Pückler and continued by Eduard Petzold. The remaining park has been included in the buffer zone. Within Germany, the estate comprises the Castle Park, Spa Park, and Upper Mountain Park including the Upper Walk. On the Polish side of the property, the Park on Terraces and Petzold’s Arboretum can be found. The property’s division by a national boundary does not compromise its integrity, since the joint transboundary management ensures that it retains its cohesive composition. The two parts of the park on either side of the Lusatian Neisse are regarded as an integral entity.

During the Second World War, the property sustained significant damage, particularly with the destruction of both castles along with the bridges spanning the river Neisse, and many individual elements of the property have not survived intact.

The park’s basic layout has not undergone any major changes since it first came into being in the first half of the 19th century. Specifically, the composition retains its original spatial structure, including the layout of its roads, water features and topography. Although the property has changed hands several times and is no longer a private estate, successive owners and gardeners have upheld Prince von Pückler’s original vision and design reflecting the high regard in which his genius continues to be held.

The conservation approach respects the evolution of the park throughout the 19th century and thus Pückler’s initial design as it was implemented during his lifetime and after his death. This applies to the shape of the park and its spatial relationships as well as to the condition of trees, pathways, watercourses and buildings. Restoration work to address some of the damage sustained to the property during the Second World War stresses the overall plan and the relationship between built elements. This work is based on detailed documentation, original plans and other archival records, as well as on meticulous research. The recent restoration of the bridges re-establishes a link between the two halves of the property across the river.The authenticity of the property has been strengthened by the exterior restoration of the New Castle, the central element and spatial dominant of the original park layout created by Prince von Pückler.

The property is primarily under state ownership. On the German side, the Free State of Saxony owns a large majority of the site and in Poland ownership is held by the State Treasury.

Both parts of the park are protected in their respective countries under the provisions of heritage protection, nature conservation and spatial planning laws, while in terms of implementing statutory provisions it is imperative to establish interdisciplinary protection priorities and the appropriate means of their implementation.

German and Polish institutions responsible for the individual parts of the park collaborate closely to manage the property, based on cooperation agreements regarding strategy planning and management of the estate. The managing institutions take decisions relating to strategy and joint investments, whilst the methods for implementing joint projects and initiatives are formulated by a Polish-German Working Group specially appointed for this purpose. The management of the park and all important decisions are evaluated and approved by the International Conservation Board of Muskauer Park / Park Mużakowski and Park Branitz. The system of management is determined by a single comprehensive Management Plan and the international cooperation fully guarantees the implementation of both general and detailed objectives of the plan focused on maintaining the property’s integrity. 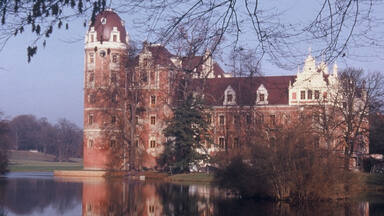