Ensemble of the Novodevichy Convent

Ensemble of the Novodevichy Convent

The Novodevichy Convent, in south-western Moscow, built in the 16th and 17th centuries in the so-called Moscow Baroque style, was part of a chain of monastic ensembles that were integrated into the defence system of the city. The convent was directly associated with the political, cultural and religious history of Russia, and closely linked to the Moscow Kremlin. It was used by women of the Tsar’s family and the aristocracy. Members of the Tsar’s family and entourage were also buried in its cemetery. The convent provides an example of the highest accomplishments of Russian architecture with rich interiors and an important collection of paintings and artefacts. 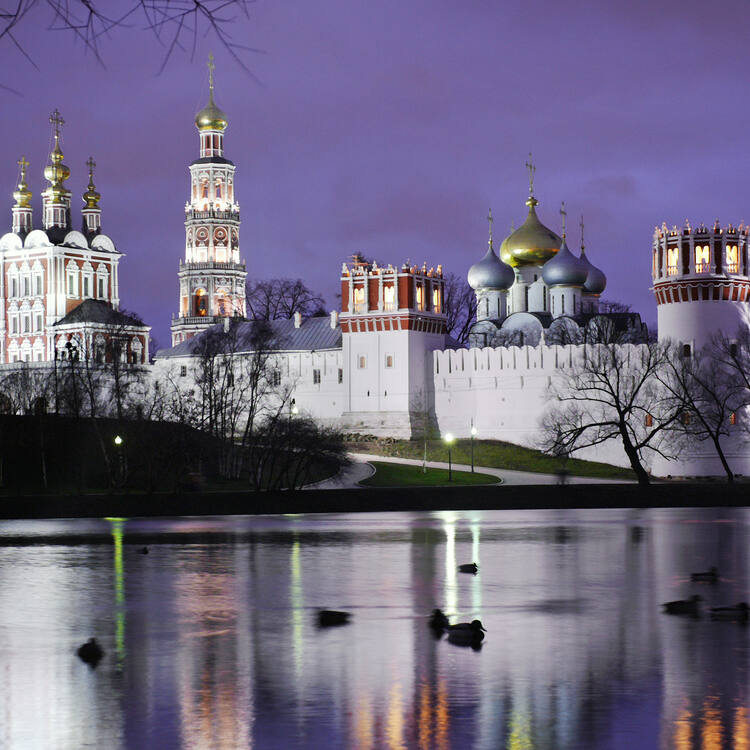 Ensemble of the Novodevichy Convent © OUR PLACE The World Heritage Collection

The Novodevichy Convent, situated in the south-western part of the historic town of Moscow at the crossing of the Moscow River, was founded by Grand Duke Vasily III in the 1520s and was a part of a chain of monastic ensembles that were integrated into the defence system of the city. It is an outstanding example of Orthodox architecture. The ensemble consists of 14 buildings, including 8 cathedrals (a shrine, 4 churches, a belfry with the Barlaam and Josaphat church and two chapels) and a number of residential and service buildings. The monastery is sometimes called “the Moscow Kremlin in miniature”. Its oldest building is a stone cathedral dedicated to the Icon of the Mother God of Smolensk built in 1524–1525 after the fashion of the Assumption Cathedral in the Moscow Kremlin.

The Convent is the only ancient nunnery which served as a fortress at the same time. In the 16th-18th centuries the nunnery was the chosen convent for women from the tsarist dynasty as well as the wealthy boyar and nobility families to take the veil. The Novodevichy Convent had close links to the Kremlin and is closely linked to the political, cultural and religious history of Russia, to major historic events and to important historic figures of the Russian state. These include Ivan the Terrible, Boris Godunov and the Time of Trouble of early 17th century, the father of Peter the Great, Alexey Michailovich as well as his daughter Princess Sofia Alekseevna and her struggle for power with the incoming Emperor Peter I, and the Patriotic War against Napoleon in 1812.

The elite nature of the convent means that it contains examples of the highest class of architecture with rich interiors. Built in the late 17th century, the monastery is one of the most outstanding and representative examples of the so-called “Moscow Baroque”, having retained its integrity better than any of the other rebuilt monasteries in Moscow.

The Convent is a major centrepiece of the south-western part of the historic town of Moscow and the Moscow River, and has a high town-planning value. Even though the character of the city’s urban surroundings has greatly changed, the Convent still remains an integral part of the landscape, unlike other monastic complexes.

The Convent is enclosed by a high masonry wall with twelve towers and with entrance gates to the north and south. It has two major planning axes and its main focal point, the Smolensky Cathedral, is located at their crossing. It is dedicated to the highest shrine of Russian Orthodoxy, the Icon of the Mother God of Smolensk “Hodigitria” and is the Convent’s oldest stone building. The interior of the Cathedral is unique in respect of its performance, riot of colour and well-preserved wall paintings of the late 16th century which were created during the reign of Boris Godunov. Completely persevered is the wooden-framed five-tier iconostasis, typical of Moscow Baroque and created in 1683-1685, with its decorated gold-coated carvings.

Among other major buildings of the Convent is the Bell Tower built in 1683-1690. It has no analogues among ancient Russian convents or among other buildings of Moscow Baroque style. Due to its great height (72m), unusual disposition, elegant proportions and beautiful decorations, the belfry has always been the main vertical element of the whole western part of the historic town of Moscow thus contributing to the Convent’s town-planning value.

The Necropolis of the Novodevichy Convent was initiated in the 16th century and developed in the following centuries as a burial place for the nobility and honourable citizens. From 1898 a new cemetery outside the south wall of the Convent was used as a burial place for the most outstanding Russian intellectuals as well as political and military figures. It is one of the most eminent historic necropolises preserved in Russia.

Criterion (i): The Novodevichy Convent is the most outstanding example of the so-called “Moscow Baroque”, which became a fashionable style in the region of Moscow. Apart from its fine architecture and decorative details, the site is characterised by its town-planning values.

Criterion (iv): The Novodevichy Convent is an outstanding example of an exceptionally well preserved monastic complex, representing particularly the “Moscow baroque” style in the architecture of the late 17th century.

Criterion (vi): The Novodevichy Convent ensemble integrates the political and cultural nature of the existing World Heritage property of Moscow Kremlin. It is itself closely related to Russian Orthodoxy, as well as with Russian history especially in the 16th and 17th centuries.

The Novodevichy Convent ensemble possesses all the necessary details and attributes to express its Outstanding Universal Value. It has preserved its original size which differentiates it from other ancient Russian convents.

The Convent has remained untouched mainly due to its use as a museum in the 20th century, while other ensembles were misused or just ruined. The ensemble’s composition, its buildings and historic graves have been conserved.

The integrity of the ensemble is provided by approved boundaries of the property and its buffer zone. Among adverse factors there is intensive road traffic close by, resulting in air pollution, as well as possible building activity within the buffer zone that may have a bad impact on the ensemble’s historic layout in the city space.

The Novodevichy Convent is authentic in that it has not undergone destruction or rebuilding. Moreover, the complex has integrally preserved its general layout as well as its individual buildings. It has also been returned to a function close to its original one. The sacral buildings today fulfil a liturgical function, the monastic structures are inhabited by monks and the ostentatious residential buildings now fulfil cultural functions as a museum.

Throughout its existence the ensemble’s buildings have been restored several times. In 1890­–1900 the architect S.K Rodionov performed restoration works for the Convent. In cooperation with I.P. Mashkov, a famous architect and a researcher of Old Russian architecture, S.K. Rodionov restored Smolensky Cathedral and cleaned oil paints off the mural paintings.

The ensemble has been subject to restoration in the late 20th century, but this has not involved replication. The restoration was preceded by thorough examination of the monuments. The restoration process by the architect N.C.Romanov was characterized by a high standard of scientific excellence and reliability. Regular restoration and conservation, work together with monitoring performed by authorized bodies, provide for preservation of authenticity.

Approval of the protected buffer zone of the Novodevichy Convent ensemble plays a decisive role in the preservation of landscape visual integrity and contributes to the preservation of unity of the property and the environment under conditions of constant development. Great attention should be paid to the establishment of effective coordination between the authorities and local cultural community, to agreeing an appropriate development strategy planning for the property, to the issues of historical landscape protection, and to the development of cultural and historical destinations of the Novodevichy Convent ensemble. It is urgent to identify specific features of the important sites of the property and to establish legal forms of their use.

The Management Plan for the World Heritage property “Ensemble of the Novodevichy Convent” will be an important tool for the conservation of Outstanding Universal Value and coordination of all stakeholders. Currently the monuments of the ensemble are in the free use of the Moscow Eparchy of the Russian Orthodox Church which assists the Ministry of Culture of the Russian Federation in the monitoring, reservation and restoration of the property. The buildings of the ensemble are equipped with video surveillance as well as fire and security signal systems. Before receiving state financing, the protection and maintenance expenses for the property are born by the Moscow Eparchy of the Russian Orthodox Church.

A long-term strategy defines the means of protection and management focused on preventing serious threats to the property, reducing its vulnerability and the possibility of negative changes to the authenticity and integrity of the ensemble. These include the following: an effective joint legal management system and cooperation of key stakeholders which include municipal, regional, federal, non-governmental and religious organizations, funds, academic and educational institutions as well as local population; resources management; an innovative combination of conservation, restoration, museumification and sustainable development of the property’s territory; the activity of the Moscow Eparchy of the Russian Orthodox Church Museum; the creation of educational programs; a rapid introduction of cultural, scientific and pilgrimage tourism; as well as combining traditional and innovative methods of conservation and the presentation of the Outstanding Universal Value of the Ensemble of the Novodevichy Convent.