The List White City of Tel-Aviv – the Modern Movement
Print

Tel Aviv was founded in 1909 and developed as a metropolitan city under the British Mandate in Palestine. The White City was constructed from the early 1930s until the 1950s, based on the urban plan by Sir Patrick Geddes, reflecting modern organic planning principles. The buildings were designed by architects who were trained in Europe where they practised their profession before immigrating. They created an outstanding architectural ensemble of the Modern Movement in a new cultural context. 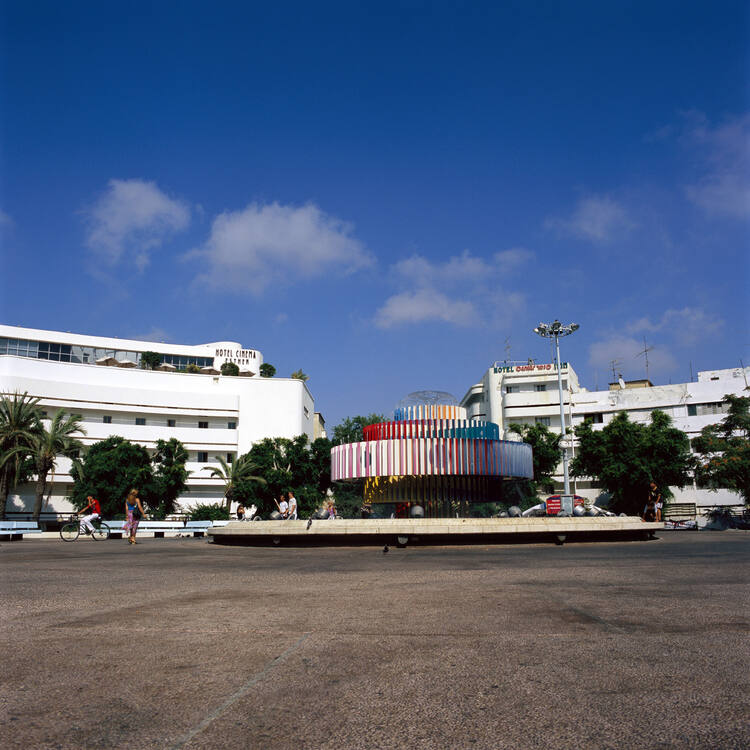 The city of Tel Aviv was founded in 1909 to the immediate north of the walled port city of Jaffa, on the hills along the eastern coast of the Mediterranean Sea. During the era of British rule in Palestine (1917-1948) it developed into a thriving urban centre, becoming Israel's foremost economic and metropolitan nucleus.

The White City of Tel Aviv can be seen as an outstanding example in a large scale of the innovative town-planning ideas of the first part of the 20th century. The architecture is a synthetic representation of some of the most significant trends of Modern Movement in architecture, as it developed in Europe. The White City is also an outstanding example of the implementation of these trends taking into account local cultural traditions and climatic conditions.

Tel Aviv was founded in 1909 and developed rapidly under the British Mandate in Palestine. The area of the White City forms its central part, and is based on the urban master plan by Sir Patrick Geddes (1925-27), one of the foremost theorists in the early modern period. Tel Aviv is his only large-scale urban realization, not a 'garden city', but an urban entity of physical, economic, social and human needs based on an environmental approach. He developed such innovative notions as 'conurbation' and 'environment', and was pioneer in his insight into the nature of city as an organism constantly changing in time and space, as a homogeneous urban and rural evolving landscape. His scientific principles in town planning, based on a new vision of a 'site' and 'region', influenced urban planning in the 20th century internationally. These are issues that are reflected in his master plan of Tel Aviv.

The buildings were designed by a large number of architects, who had been trained and had practised in various European countries. In their work in Tel Aviv, they represented the plurality of the creative trends of modernism, but they also took into account the local, cultural quality of the site. None of the European or North-Africa realizations exhibit such a synthesis of the modernistic picture nor are they at the same scale. The buildings of Tel Aviv are further enriched by local traditions; the design was adapted to the specific climatic conditions of the site, giving a particular character to the buildings and to the ensemble as a whole.

Criterion (ii): The White City of Tel Aviv is a synthesis of outstanding significance of the various trends of the Modern Movement in architecture and town planning in the early part of the 20th century. Such influences were adapted to the cultural and climatic conditions of the place, as well as being integrated with local traditions.

Criterion (iv): The White City of Tel Aviv is an outstanding example of new town planning and architecture in the early 20th century, adapted to the requirements of a particular cultural and geographic context.

The spirit of the Geddes plan has been well preserved in the various aspects of urban design (morphology, parcelling, hierarchy and profiles of streets, proportions of open and closed spaces, green areas). The urban infrastructure is intact, with the exception of Dizengoff Circle, where traffic and pedestrian schemes have been changed, although efforts are being made to reinstate the original plan Incremental changes could affect the integrity of the urban ensemble in the future. There are some visible changes in the buffer zone due to new construction and commercial development in the 1960s-1990s including some office and residential structures that are out of scale. The White City is encapsulated inside a ring of high-rise structures, which has obviously altered the initial relationship with its context. Any further development could impact on its visual integrity.

The authenticity of architectural design has been fairly well preserved, proven by homogeneous visual perception of urban fabric, the integrity of style, typology, character of streets, relationship of green areas and urban elements, including, fountains, pergolas and gardens. The details of entrance lobbies, staircases, railings, wooden mailboxes, front and apartment doors, window frames have generally not been changed, though there are some losses - as in most historic towns.

The design of some individual buildings has been modified through rooftop additions even in registered buildings. Although within certain limits, such additions could be perceived as part of traditional continuity, to keep Tel Aviv as a vibrant, living city, attention will need to be given to ensure, the quantity of remodelled buildings is not enough to alter the urban profile, the original scale or parameters of the site.

Management is covered and incorporated in urban and territorial plans. These include the National Master Plan TaMA 35, with the relevant section 58 on the 'Urban Conservation Ensemble in Central Tel Aviv - Jaffa', and the Regional Master Plan TMM 5 providing the main planning instrument for the Tel Aviv conservation area. Management policies include programmes to encourage tourist activities, provide information, and placing an emphasis on conservation. It would be desirable to consider the possibility to provide legal protection at the national level to recent heritage.

Deposited in 2002, Conservation Plan (2650B) was approved in 2008. As the majority of the approximately 1,000 historic buildings identified in this document, and other focused local plans, are privately owned, a strategy allowing the transfer of building rights has been implemented to compensate for the loss of those rights. This specifically includes the stringent conditions applying to 180 buildings to which no changes are allowed. Within defined limitations, the application of permitted additional floors to the other remaining protected buildings has been allowed.

A special process has been established for the evaluation, approval and supervision of building permits and construction within the inscribed area. This is managed and controlled by the Municipality's Conservation Unit that currently employs eight trained architects. With the intention of providing measures to improve the control of changes in existing fabric, in view of existing real estate pressures, development trends are continually monitored by the Municipality.

With reference to the Operational Guidelines Annex 3 (concerning New Towns of the 20th century) it is essential for the city of Tel Aviv to ensure moderated and controlled growth in the historic core area. Accordingly, height limits are to be proposed for the property and its buffer zone.