The Citadel, Ancient City and Fortress Buildings of Derbent were part of the northern lines of the Sasanian Persian Empire, which extended east and west of the Caspian Sea. The fortification was built in stone. It consisted of two parallel walls that formed a barrier from the seashore up to the mountain. The town of Derbent was built between these two walls, and has retained part of its medieval fabric. The site continued to be of great strategic importance until the 19th century. 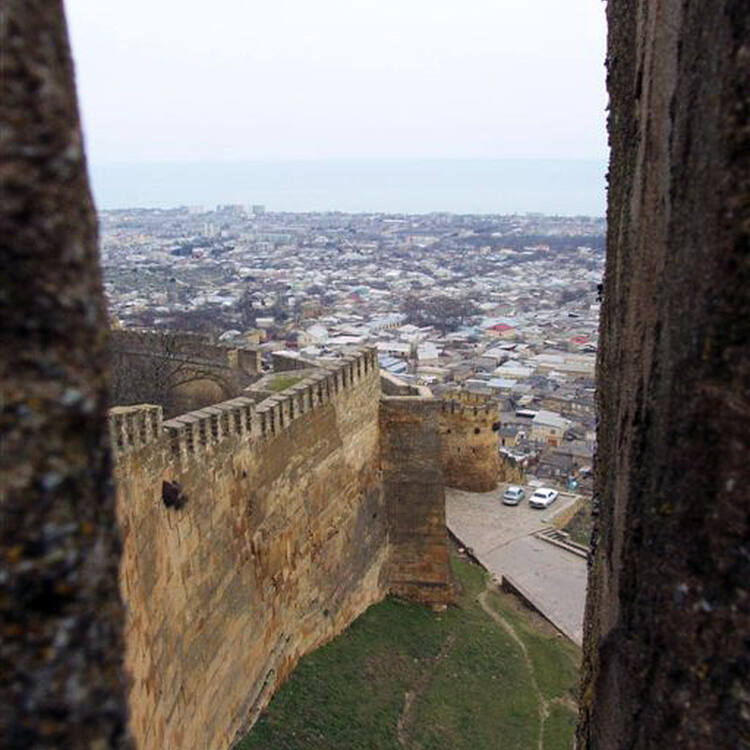 Derbent is located in Russia’s Dagestan region, on the western coast of the Caspian Sea. It owes its rich history to its strategic position, along the travel route between Europe and the Middle East, on the border of Europe and Asia, where the mountains of the Caucasus almost arrive at the coast leaving a narrow 3-km strip of plain.

Physical evidence of Derbent’s defensive role dates from the 7th or 8th century BCE, and, since the 1st millennium BC, control of the north-south passage on the western side of the Caspian Sea has been linked to this location. Archaeological excavations since the late 1970s have confirmed Derbent’s nearly 2,000 years of continuous history as urban settlement, the oldest in Russia and one of the most ancient in the region. Evidence was found of a fortified settlement in the region of the citadel during the 3rd century BCE and 4th century CE, which was confirmed by historical documents; Greek-Roman authors knew this settlement by the name of Albanian gate and meanwhile the ancient Armenian authors called it the Chol/Chor.

The modern name of Derbent (from Persian dar, “gate”, and band, “red, communication, barrier”) is associated with a great fortification constructed in the 5th century by the Sasanian Empire. Two walls were constructed 300 to 400 m apart, extending approximately 3.6 km from the Caspian Sea up to the citadel situated on the mountain. The walls extend 500 m into the Caspian Sea to protect the harbour and the mountain wall continues 40 km west, over the mountains, defending the northern borders from warlike nomads by completely blocking the pass between the sea and the mountains. Seventy-three defence towers were constructed, 46 of which were in the north wall. Nine of the original 14 gates survive. During the 6th century, wall construction, for both the city walls and citadel, was characterized by dry armor-clad brickwork (poke and spoons) made of big rectangular blocks with ragged stone on lime mortar in its internal backfilling.

The citadel is surrounded on three sides by steep slopes and has massive stone walls between 2.5 m and 3.2 m thick, over 700 m in length and 10 to 15 m in height. Within the citadel, the ruins and archaeological remains of a number of buildings are found, including the Khan’s Palace, a bath, several underground water tanks, a 5th-century Christian church, and an 8th-century mosque, one of the earliest in the former Soviet Union.

Between the parallel defence walls, the city was built with the commercial sector close to the waterfront and the residential buildings near the citadel. In the late 19th century, the southern wall was demolished, and a modern city developed along the seafront and beyond the remaining wall. Within the historic town, many buildings survive including courtyard houses, public buildings, mosques, baths, madrasahs, and the remains of a caravanserai.

Fortifications combined with the medieval buildings of the old part of the city, the so-called Magalims, form a unique cultural landscape. Derbent has largely maintained its original form and provides impressive evidence of the city’s greatness and power in different historic periods over 15 centuries – Arab, Seljuk, Mongol, Timurid and Safavid periods until the 19th century when it became part of the Russian Empire. The property that is inscribed as the Citadel, Ancient City and Fortress Buildings of Derbent covers 37.658 ha and is surrounded by a 451.554-ha buffer zone.

Criterion (iii): The site of the ancient city of Derbent has been crucial for the control of the north-south passage on the west side of the Caspian Sea since the 1st millennium BCE. The defence structures that were built by the Sasanians in the 5th century CE were in continuous use by the succeeding Persian, Arabic, Mongol, and Timurid governments for some fifteen centuries.

Criterion (iv): The ancient city of Derbent and its defence structures are the most significant section of the strategic defence systems designed and built in the Sasanian Empire along their northern limes, and maintained during the successive governments until the Russian occupation in the 19th century.

The World Heritage property “The Citadel, Ancient City and Fortress Buildings of Derbent” includes all necessary attributes demonstrating its Outstanding Universal Value, which are located inside the protected boundaries of its territory. Despite some loss to original fabric, including the 19th-century demolition of the south wall, much of the site has been preserved. The historic core of the town with its winding narrow streets survives, although a new main street was inserted.

Taking into consideration the location of monuments in vast territory, the integrity and conservation of each individual component of the World Heritage property is ensured by the approved boundaries and protected territories. Derbent’s status as a World Heritage property and a monument of federal importance under State protection allows the conservation of all architectural objects and the archaeological and cultural layers that reflect city’s evolution.

Identified threats to the site are landslides, particularly along the citadel’s steep slopes, uncontrolled development in the area near the sea, and the looting of stones by residents for personal use. In addition, the walls are at risk by the growth of vegetation.

The level of authenticity of the complex is high. Its position between the mountains and the sea illustrates the importance of its original defensive setting. Although the defensive use of the citadel is no longer required, authenticity of form and design is evident in the old buildings between the fortress walls. Moreover, the city’s historic layout has been preserved with the relationship of the citadel, remaining north wall, and winding street pattern in the medieval town which continues to have a residential population. Stone, the primary building material for the walls and historic buildings, is visible throughout the site. Recent conservation and partial restoration of architectural monuments have used traditional building techniques, materials and substances that correspond to the appropriate historical period. Its current historic layout, street patterns, and building use are supported by historical and archaeological evidence, such as artefacts, ancient writings, old maps and plans. Archaeological research is ongoing for non-excavated parts that conserve the authentic remains of the original buildings.

Management for the World Heritage property is the responsibility of the Ministry of Culture of the Russian Federation with the Ministry of Culture of the Republic of Dagestan, which is considered the territorial authorized executive body. Derbent Historical-Architectural and Art Museum-Reserve has the responsibility for the management of the buildings within the property that have been identified as monuments of historical and cultural heritage. These buildings are owned by the state and protected under RSFSR Supreme Soviet Decree of 27.12.1991. The museum-reserve also takes care of the conservation of its historical and cultural heritage, regularly monitors the technical condition of the monuments and the whole territory, and provides access to the cultural interests and their participation in cultural life.

The museum, together with the Ministry of Culture of the Republic of Dagestan, effectively protects the sites of cultural heritage located on the territory of Derbent, using legal, financial and organizational measures. All work to ensure conservation and protection of monuments within operational management is carried out in strict compliance with norms of federal and republican legislation. A management plan is currently being developed.