Masada is a rugged natural fortress, of majestic beauty, in the Judaean Desert overlooking the Dead Sea. It is a symbol of the ancient kingdom of Israel, its violent destruction and the last stand of Jewish patriots in the face of the Roman army, in 73 A.D. It was built as a palace complex, in the classic style of the early Roman Empire, by Herod the Great, King of Judaea, (reigned 37 – 4 B.C.). The camps, fortifications and attack ramp that encircle the monument constitute the most complete Roman siege works surviving to the present day. 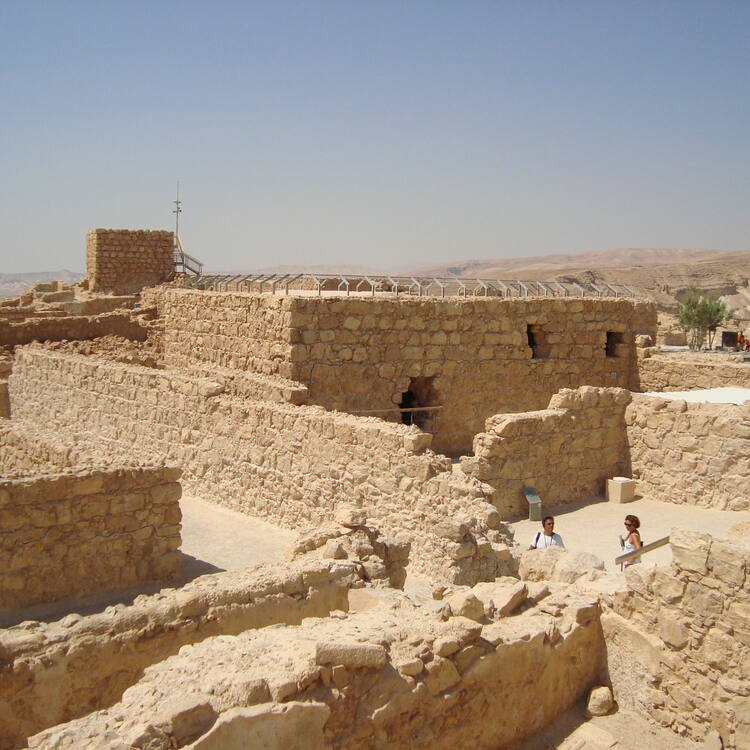 Masada is a dramatically located site of great natural beauty overlooking the Dead Sea, a rugged natural fortress on which the Judaean king Herod the Great constructed a sumptuous palace complex in classical Roman style. After Judaea became a province of the Roman Empire, it was the refuge of the last survivors of the Jewish revolt, who chose death rather than slavery when the Roman besiegers broke through their defences. As such it has an emblematic value for the Jewish people.

It is also an archaeological site of great significance. The remains of Herod's palaces are outstanding and very intact examples of this type of architecture, whilst the untouched siegeworks are the finest and most complete anywhere in the Roman world.

The Masada complex, built by Herod the Great, King of Judaea, who reigned between 37 BCE and 4 CE, and particularly the "hanging" palace with its three terraces, is an outstanding example of opulent architectural design, elaborately engineered and constructed in extreme conditions. The palace on the northern face of the dramatic mountain site consists of an exceptional group of classical Roman Imperial buildings.  The water system was particularly sophisticated, collecting run-off water from a single day's rain to sustain life for a thousand people over a period of two to three years. This achievement allowed the transformation of a barren, isolated, arid hilltop into a lavish royal retreat.

When this natural defensive site, further strengthened by massive walls, was occupied by survivors of the Jewish Revolt against Roman rule, it was successfully besieged by a massive Roman army. The military camps, siegeworks and an attack ramp that encircle the site, and a network of legionary fortresses of quadrilateral plan, are the most complete anywhere in the Roman world. Masada is a poignant symbol of the continuing human struggle between oppression and liberty.

Criterion (iii): Masada is a symbol of the ancient Jewish Kingdom of Israel, of its violent destruction in the later 1st century CE, and of the subsequent Diaspora.

Criterion (iv): The Palace of Herod the Great at Masada is an outstanding example of a luxurious villa of the Early Roman Empire, whilst the camps and other fortifications that encircle the monument constitute the finest and most complete Roman siege works to have survived to the present day.

Criterion (vi): The tragic events during the last days of the Jewish refugees who occupied the fortress and palace of Masada make it a symbol both of Jewish cultural identity and, more universally, of the continuing human struggle between oppression and liberty.

Due to its remoteness, and the harsh climate of the southern end of the Judean Desert, following the dissolution of the Byzantine monastic settlement in the 6th century the Masada site remained untouched for more than thirteen centuries until its rediscovery in1828. The property encompasses the remains of the site on its natural fortress and the surrounding siegeworks.

Of equal importance is the fact that the setting of Masada, the magnificent wild scenery of this region, has not changed over many millennia. The only intrusions are the lower visitor and cable car facilities, which in their new form have been designed and relocated sympathetically, to minimize visual impact, though the siting of the summit station, is still controversial.

This is a site that remained untouched for more than thirteen centuries. The buildings and other evidence of human settlement gradually collapsed and were covered over until they were revealed in the 1960s. There have been no additions or reconstruction, beyond an acceptable level of anastylosis, and inappropriate materials used in early conservation projects are being replaced. Limited restoration works have been carried out to aid visitor interpretation with original archaeological levels being clearly defined by a prominent black line set in the new mortar joints. Certain significant archaeological elements, such as the Roman camps and siegeworks, remain virtually untouched. The authenticity is therefore of a very high level.

The Judean desert remains a sparsely settled area, with the harshness of the environment serving as a natural barrier against modern urban and rural development pressures.

The property and buffer zone are owned by the State of Israel, and the archaeological sites are protected by the 1978 Antiquities Law. Since 1966 the entire Masada site, and its surroundings, have been designated a National Park, updated by the 1998 National Parks, Nature Reserves, National Sites and Memorial Sites Law. The National Park is further protected through being entirely surrounded by the Judean Desert Nature Reserve, also established under the 1998 Act.

The property is managed by the Israel Nature and Parks Authority, in cooperation with the Israel Antiquities Authority. An important aspect of the current management plan is the decision to carry out no further research excavation on the main site "in the present generation", although limited excavation will be permitted when required by conservation, maintenance or restoration projects.

Almost entirely invisible from the summit, a new visitor centre was opened on the plain beneath the eastern side of Masada in 2000. Providing all the anticipated facilities, the centre was designed to accommodate the 1.25 million visitors per annum. The cable car, originally installed in the 1970's, was replaced by a new, less intrusive, and heavily used system to connect the visitor centre with the summit. It is also still possible to undertake the arduous climb to the summit by the two historic pedestrian access routes.

The policy of prohibiting commercial activities of any kind, and picnicking on the summit, is rigorously maintained.