The grottoes and niches of Longmen contain the largest and most impressive collection of Chinese art of the late Northern Wei and Tang Dynasties (316-907). These works, entirely devoted to the Buddhist religion, represent the high point of Chinese stone carving. 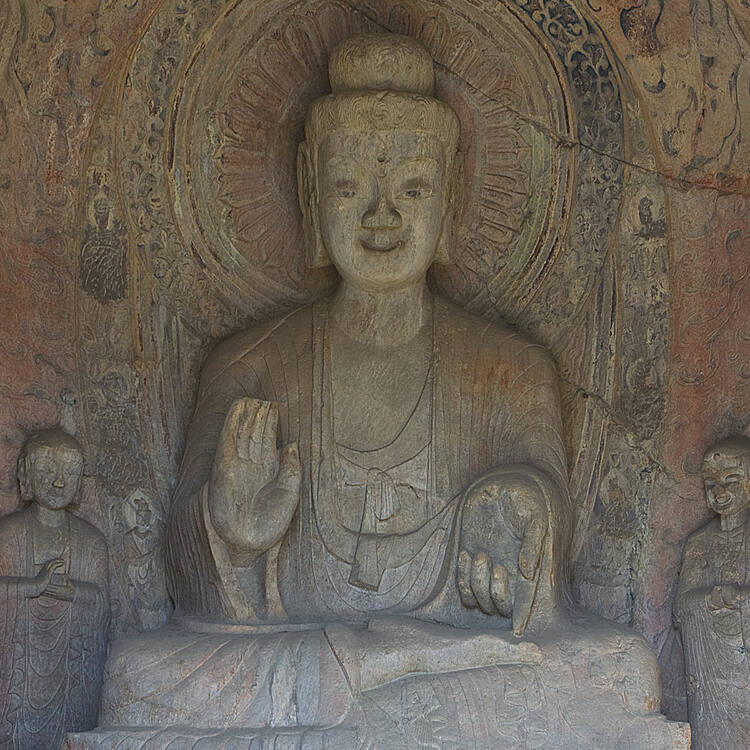 The Longmen Grottoes, located on bothsides of the Yi River to the south of the ancient capital of Luoyang, Henan province, comprise more than 2,300 caves and niches carved into the steep limestone cliffs over a 1km long stretch. These contain almost 110,000 Buddhist stone statues, more than 60 stupas and 2,800 inscriptions carved on steles. Luoyang was the capital during the late Northern Wei Dynasty and early Tang Dynasty, and the most intensive period of carving dates from the end of the 5th century to the mid-8th century. The earliest caves to be carved in the late 5th and early 6th centuries in the West Hill cliffs include Guyangdong and the Three Binyang Caves, all containing large Buddha figures. Yaofangdong Cave contains 140 inscription recording treatments for various diseases and illnesses. Work on the sculpture in this cave continued over a 150 year period, illustrating changes in artistic style. The sculptural styles discovered in the Buddhist caves of the Tang Dynasty in the 7th and 8th centuries, particularly the giant sculptures in the Fengxiansi Cave are the most fully representative examples of the Royal Cave Temples’ art, which has been imitated by artists from various regions. The two sculptural art styles, the earlier “Central China Style” and the later “Great Tang Style” had great influence within the country and throughout the world, and have made important contributions to the development of the sculptural arts in other Asian countries.

Criterion (i) : The sculptures of the Longmen Grottoes are an outstanding manifestation of human artistic creativity.

Criterion (ii) : The Longmen Grottoes illustrate the perfection of a long-established art form which was to play a highly significant role in the cultural evolution in this region of Asia.

Criterion (iii) : The high cultural level and sophisticated society of Tang Dynasty China are encapsulated in the exceptional stone carvings of the Longmen Grottoes.

The caves, stone statues, steles and inscriptions scattered in the East Hill and West Hill at Longmen have been well preserved. The property area and buffer zone retain their natural landscapes and the ecological environment that have existed since the late 5th century. The works of humans and nature have been harmoniously unified and the landscapes possess high integrity.

In the continuous evolution of Longmen Grottoes, the aesthetic elements and features of the Chinese cave temples’ art, including the layout, material, function, traditional technique and location, and the intrinsic link between the layout and the various elements have been preserved and passed on. Great efforts have been made to maintain the historical appearance of the caves and preserve and pass on the original Buddhist culture and its spiritual and aesthetic functions, while always adhering to the principle of “Retaining the historic condition”.

As one of China’sState Priority Protected Sites, the Longmen Grottoes have received protection at national level under the Law of the People's Republic of China on the Protection of Cultural Relics. The local legal instruments such as the Regulations of Luoyang City on the Protection and Management of Longmen Grottoes have ensured the legal protection system. The Management Agency of the Ministry of Culture of the PRC works with the Research Institute of Luoyang City together with professional teams on the protection, publicity, education and presentation for the Grottoes. The Management Agency has drafted The Conservation Plan of the Longmen Grottoes, and according to this plan, research capabilities have been strengthened, including the analysis of the deterioration mechanism of the caves, environmental monitoring, conservation materials and control measures. Based on the research results of tourist carrying capacity, the opening capacity of the property area is effectively controlled; the negative effects to the heritage made by different kinds of adverse factors have been minimized; the setting of the caves is protected; and a rational and effective balance between protection and development of the heritage place is maintained.