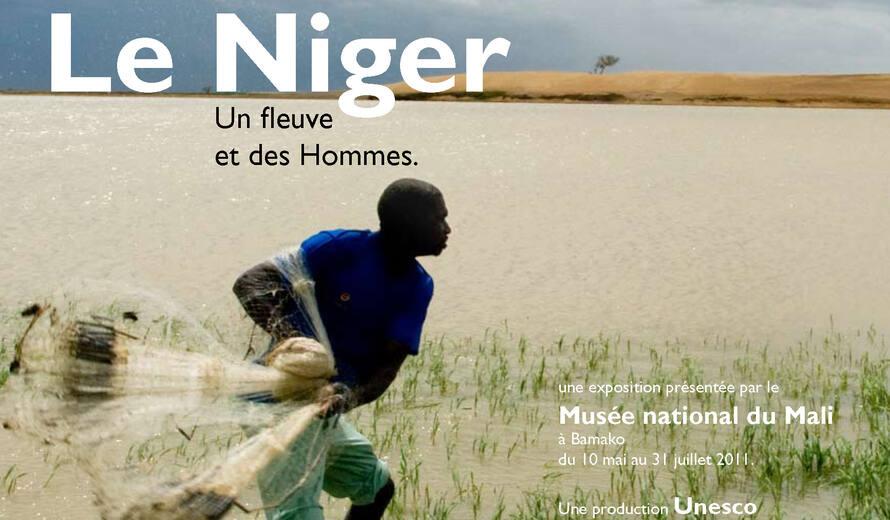 "Niger, river and men" will be opened to the public in Mali national museum, Bamako, from 10. May to 31. July 2011. The exhibition was produced by UNESCO and its partners as part of the "Niger-Loire : Governance and Culture" project and intends to raise awareness of the general public and decision makers on the cultural assets of the Niger river and challenges for its future.

The scenography was elaborated by Philippe Leduc (Lucie Lom) with support from Sokona Tounkara, and provides visitors with a sensory experience. Information on the river (hydrology, biodiversity, culture) come together with concrete outputs of the project and are organized along 12 thematic spaces over a total area of 450 m2.

Works and plastic installations, produced by Mamadou Konate (Mali) and students from the National Academy of Arts of Mali, provide a vision on the sacred aspects of the river. Scale models elaborated by students from Bamako architecture school illustrate views on the future of urban development along the river banks.

A programme of activities is opened to the public. Pedagogic visits will address 1000 school kids from Bamako. Workshops on earthen architecture and environmental tales on river animals are opened on a weekly basis in the museum gardens, along with thematic conferences.

Two films were shown in the museum venues : Faro, queen of the river (Salif Traoré) and Niger, a human river (Sylvain L'Espérance). A concert was offered by Vieux Farka Touré and ten musicians from several locations along the river, and illustrate its musical diversity. After its closure in the national museum, the exhibition will circulate on a boat in 30 cities and villages along the Niger.