The General Assembly of States Parties, at its 17th Session, welcomed the offer by Japan and Australia to host a meeting to explore creative approaches to reduce the number of properties that encounter significant problems in the nomination process.

The World Heritage Committee, in Decision 33 COM 14.A2 para 14, recognised that challenges exist in the process for nominating a property to the World Heritage List.  States Parties spend considerable time and money developing nominations which may be delayed or unsuccessful.  The Advisory Bodies are sometimes constrained in their ability to provide support to States Parties on possible nominations due to potential conflicts with evaluation processes.  International Assistance does not always result in successful nominations and the World Heritage Committee is often faced with difficult, pressured inscription decisions.

The meeting will focus on options for improving and strengthening the current nomination process. This will include Tentative Listing procedures, the technical check performed by the World Heritage Centre, and the evaluation processes undertaken by the Advisory Bodies. 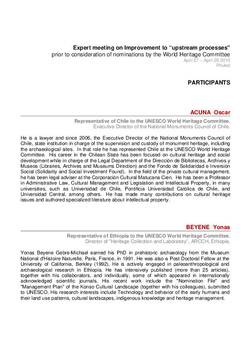 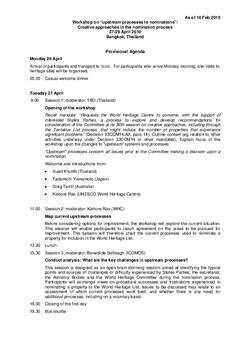 3. Notes that the World Heritage Convention is approaching universal ratification and its fortieth anniversary in 2012, and therefore that it is appropriate to reflect on the successes of the Convention and also how it can best evolve to meet the emerging challenges it faces while also increasing its relevance and engagement with communities around the world;

4. Expresses its appreciation to the States Parties of Australia, Brazil, Israel, Switzerland and the Netherlands and the UNESCO 'Aid to developing countries' Fund for supporting the Workshop to reflect on the Future of the World Heritage Convention (25-27 February 2009, UNESCO headquarters);

5. Recognizes the participation of State Party experts and representatives of the Advisory Bodies and non-governmental organizations in this Workshop, including through written submissions, in this valuable, inclusive and transparent ongoing process;

6. Welcomes the additional positive discussion that occurred on this matter at the Committee's 33rd session (Seville, 2009);

7. Notes in particular the good progress that was made in developing a Draft Vision for implementation of the Convention, which reflects and builds on the objectives of Credibility, Conservation, Capacity building, Communication and Communities;

8. Decides that this Draft Vision (Annex 1) and Document WHC-09/33.COM/14A should be presented to the General Assembly and the next session of the Committee as a basis for further discussion;

9. Notes that the submissions from State Parties and others to the February 2009 Workshop, and the background documents prepared for this workshop are available at https://whc.unesco.org/en/futureoftheconvention/ for the information of States Parties;

10. Decides that it would be useful to develop an overall strategic plan to guide the implementation of the World Heritage Convention over the next decade, taking into consideration, inter alia, the objectives of the Convention, the principles expressed in the Budapest Declaration, the Global Strategy, and the concepts expressed in the Draft Vision, including those related to sustainable development;

12. Decides however that there are several high priority short to medium term activities that should be commenced immediately, as set out in the following paragraphs;

13. Requests the World Heritage Centre, in consultation with the Advisory Bodies, and with input from interested State Parties and external stakeholders, to jointly develop an inclusive plan of action to increase community awareness of the value of world heritage and engagement in the work of the Convention, including through the identification of best practice examples and a communication toolkit to assist States Parties in these activities at a national and local level;

14. Requests the World Heritage Centre to convene, with the support of interested States Parties, a process to explore and develop recommendations for consideration of the Committee at its 34th session on creative approaches, including through the Tentative List process, that might reduce the number of properties that experience significant problems;

15. Further requests that this process also explores and develop recommendations on creative approaches that will assist States Parties and property managers in effectively responding to the range of problems that emerge for inscribed properties;

16. Reiterates its encouragement to States Parties, with the support and cooperation of the Advisory Bodies and other States Parties, to develop and finalize Statements of Outstanding Universal Value for all World Heritage properties for which they are responsible, and notes the importance of ensuring that these Statements are subsequently assessed as expeditiously as possible;

17. Requests the World Heritage Centre to undertake a feasibility study to further explore the concept and implications of holding two sessions of the Committee each year, in addition to exploring other options for more effectively and efficiently managing the increasing workload of the Committee, including by drawing on the experience of other multilateral conventions;

18. Requests the Director of the World Heritage Centre, in consultation with States Parties, to investigate options for increasing financial support for the objectives of the Convention, including but not limited to, voluntary State Party contributions, fundraising, partnerships, Regional Centres, regional funds, bilateral and multilateral assistance, and increased UNESCO support for the Regular Budget, and

19. Requests the chair of the Consultative Body to report to the General Assembly of States Parties on all of the above as part of his report on the reflection on the future of the World Heritage Convention.