The main objectives of the meeting are to:

This expert meeting will implement Decision 30 COM 9 by the 30th session of the World Heritage Committee. The discussion will focus on problems and best practices concerning buffer zones and issues related to the integrity of properties inscribed on the World Heritage List.

The outcome of the meeting, including proposals of modifications to the Operational Guidelines of the World Heritage Convention (Version 2005) regarding definition and management of buffer zones, as well as conditions of integrity, will be presented to the 32nd session of the Committee (Québec, July 2008). The discussion will be based on case studies (of natural sites, cultural sites, mixed sites, and cultural landscapes) as well as on the results of studies undertaken in the framework of the Retrospective Inventory, Periodic Reporting and State of conservation processes.

The working languages of the meeting are French and English. There will be an interpretation service in both languages. 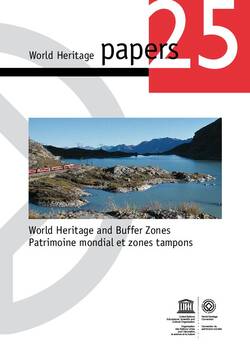 4. Further notes that threats originating outside the World Heritage properties and beyond buffer zones may have adverse impacts on the Outstanding Universal Value of properties and therefore encourages States Parties, together with the World Heritage Centre and the Advisory Bodies, to take into account the recommendations of the «International Expert Meeting on Buffer zones» (Davos, Switzerland 2008) as provided in the detailed report of the meeting and its publication;

5. Also encourages States Parties to refine and put in place relevant legal tools or management plans concerning the conservation of properties and management of buffer zones.

2. Recalling Decision 30 COM 9, adopted at its 30th session (Vilnius, 2006) and thanking the States Parties of Israel and Switzerland for jointly hosting the International Expert Meeting on World Heritage and Buffer Zones (Davos, Switzerland, 11-14 March 2008) in cooperation with the World Heritage Centre;

3. Notes the detailed report provided by the expert meeting which reflects on a wide range of issues relevant to World Heritage and buffer zones and also notes the publication under preparation for the World Heritage paper series;

4. Requests the World Heritage Centre and the Advisory Bodies to use the terms "property" and "buffer zone" in all documents, and to stop using the term "core zone".

5. Also requests the World Heritage Centre and the Advisory Bodies to prepare draft revisions to the Operational Guidelines, taking account of the Committee's debate on the results of the International Expert Meeting on World Heritage and Buffer Zones by 1 December 2008, with particular emphasis on developing a lexicon of terms;