Together with 5 Central Asian countries and China, UNESCO has coordinated the preparation of the transnational serial World Heritage nomination of the Silk Roads since 2003. Central Asia and China have supported the project through organizing regional and sub-regional consultation meetings, the establishment of inter-governmental Coordinating Committee composed of 12 participating countries, and the elaboration with ICOMOS and UNESCO of a Thematic Study on the Silk Roads. Since 2006, the UNESCO Japanese Funds-in-Trust and Norwegian Funds-in-Trust projects for the Central Asian Silk Roads have supported and secured targeting capacity building and nomination development within the Central Asia region, in addition to the UNESCO Korean Funds-in-Trust also recently having been operational since July 2013 for the South Asian Silk Roads project. As a result of eight international and regional consultation meetings and the efforts of the three Coordinating Committee meetings between 2006 and 2012, two nomination files were prepared. These two nominations were reviewed at the 38th session of the World Heritage Committee in June 2014 (Doha, Qatar). The Committee decided to inscribe on the World Heritage List the “The Silk Roads: the Routes Network of Chang’an - Tian-shan Corridor”, submitted by China, Kazakhstan and Kyrgyzstan. 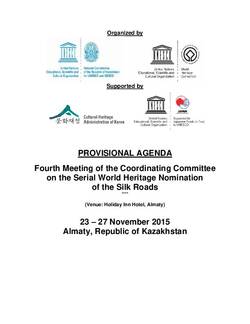