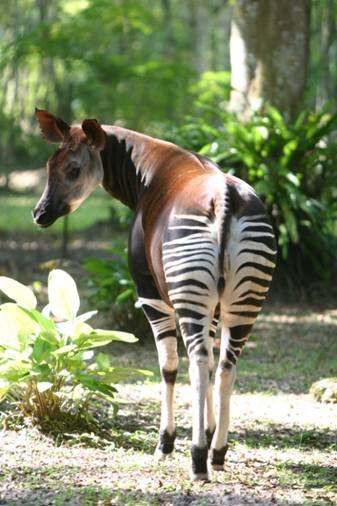 The Okapi Wildlife Reserve has been on the World Heritage List since 1996. It occupies about one-fifth of the Ituri forest in the northeast of the Democratic Republic of the Congo, near the borders of Sudan and Uganda. Covering an area of 13,726 km2, it covers approximately one fifth of the whole forest. The Congo River Basin, of which the reserve and forest are a part, is one of the largest drainage systems in Africa. The reserve is home to endangered primates and birds and about 5,000 okapi of the 30,000 living in the wild. It also boasts spectacular scenery, including waterfalls on the Ituri and Epulu rivers. The reserve and Ituri Forest is also the cultural center of the Mbuti and Efe pygmies.

On 24 June 2012, the research centre of Epulu was violently attacked by armed rebels and poachers. Six people were killed by the aggressors, the premises of the reserve was looted and burned, and the Okapis on the site (in confinement or isolation for scientific research) were massacred.

Support was given to the NGO Wildlife Conservation Society (WCS) in Democratic Republic of the Congo with funds for technical assistance from the Rapid Response Facility (RRF). RRF funds were created specifically to respond during situations of crisis and emergency, they provide resources needed to save natural sites registered on the World Heritage List rapidly and flexibly. The Rapid Response Facility is a small grants programme jointly operated by the UNESCO World Heritage Centre, the United Nations Foundation, and Fauna & Flora International. Under the France-UNESCO Cooperation Agreement, complimentary funding was provided to support the emergency initiative.

The Wildlife Conservation Society, who have been active on the site for a long time, helped restore the primary functions of the Reserve. The funds have contributed to answer the needs of the Congolese Institute for the Conservation of Nature, the local authorities for protected areas. In addition, they have helped revive the essential operating activities of the park and helped the guards and families affected by the attack of the poachers and rebels.