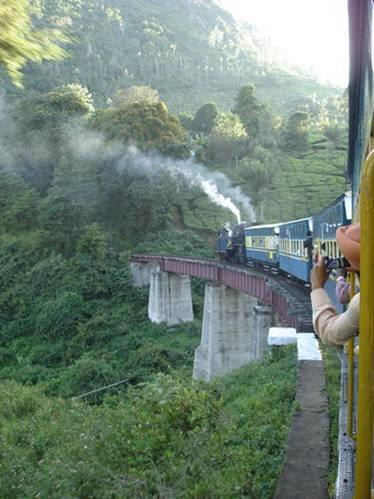 Technical assistance for the management of the Darjeeling Himalayan Railways, the Mountain Railways of India

The Darjeeling Himalayan Railway (DHR) was the first of three mountain railways of India to be inscribed on the World Heritage List in 1999. The property was extended in 2005 and 2008 to include two other railroads of the 19th century, the Nilgiri and the Kalka Railways and the property was renamed the Mountain Railways of India.

The Darjeeling Himalayan Railway opened in 1881 and applied bold and ingenious engineering solutions to the problem of establishing a railway line across a mountainous terrain and landscapes of great beauty. When the Darjeeling Himalayan Railway was inscribed on the World Heritage List in 1999, ICOMOS was concerned about the fragility of the site and the lack of buffer zones. At the request of Indian authorities, technical assistance was provided in the form of advice and analysis over several years. The challenge was to find solutions for managing an extensive territory and linear rail line several kilometres long with incredibly narrow boundaries, in some stretches only as wide as the tracks themselves, and to also preserve the industrial heritage (immovable and movable) and integrity of use.

To regulate land management and compensate for the lack of a buffer zone, the design of a regional natural park, inspired by the French model and close to MAB, was proposed as a first step in the framework of cooperation between the West Darjeeling, India, and the Languedoc-Roussillon region, France. Following several missions and exchanges, the idea of a park was retained, but the partnership itself was abandoned due to local institutional constraints.

Despite this, in 2004, a mission organized under the framework of the France-UNESCO Cooperation Agreement undertook a comprehensive study of the Darjeeling Himalayan Railway including, Darjeeling’s socio-economic situation , the environment and wildlife of the site, the state of the town’s urban structures, networks and infrastructure, and of regional property. The mission made short and long term recommendations to enhance the use of the Darjeeling Himalayan Railway, especially as a tool for economic development for the entire region. The mission’s findings led to the adoption of short and medium term development strategies for the site, and priority actions were proposed, especially in regard to improving networks and infrastructures pertaining to economic development and environmental protection. In 2006, important outreach efforts led to cooperation with various partners.

Subsequently, the UNESCO New Delhi Office provided support for the Mountain Railways of India, specifically for studying and implementing management plans for the three sites.