Since 1993, the Calakmul Archaeological Project has made an enormous contribution to interdisciplinary research, ensuring the integral conservation of the Outstanding Universal Value, as was established by the World Heritage Committee in 2002, when the site was inscribed on the UNESCO World Heritage List, in accordance with Criteria (i), (ii) (iii) and (iv). The site is a unique testimony to the different exchanges and influences throughout 12 centuries of history that has borne witness to the construction of architectural complexes built like acropolises, interconnected by squares and courtyards. Calakmul was one of the most prominent cities in the Central Mayan area.

Discovered in 1931, the site has not ceased to amaze the scientific community with its quality urban planning. Located in the biosphere reserve of Calakmul, one of the largest biospheres of tropical rainforest, it is one of the most important cities of Mayan civilization known today, founded between 500 to 600 BC. Its influence on the Classical Period included the Usumacinta River and the La Pasión River, as mentioned in the historical inscriptions of Petén.

Amongst all the acropolises that make up the site, the well-known Chii`k Naab, one of the four monuments that surrounds the central square, stands out. Structure I of the acropolis is the tallest of the built-up landscape. When the first archaeological intervention of this building took place in 2005, a substructure of exceptional value for the scientific community was discovered. The substructure, completely covered in mural painting, was built between 650 and 700 B.C. The structure has a base of 12 metres in width and 5 metres in height and has extraordinary mural imagery with scenes of daily life, this being of particular importance as it is one of the few pictorial representations of the Mayan world in which there are no religious, ceremonial or political scenes.

Its discovery enhanced the scope for study and also became a major challenge for conservation. It is known that tropical climates present enormous difficulties for the treatment and conservation of wall paintings. This led Ramón Carrasco Vargas, the Calakmul Project Director and María Cordeiro Baqueiro, Director of Conservation and Restoration, to consider a multidisciplinary approach of analysis and intervention, trying out innovative methodologies to show that it is possible to preserve and keep paintings just as spectacular as the original condition in which they were found. These new methodologies are keeping in line with the recommended standards of International Organisations on archaeological integrated conservation which have been universally accepted since the adoption of the Valetta Convention in 1992. The works received the technical support of prestigious researchers like Dr Piero Baglioni, from the Department of Chemistry of the University of Florence and Director of the National Consortium for Nanosystems (CSGI), of which both institutions carried out nanotechnology application trials. 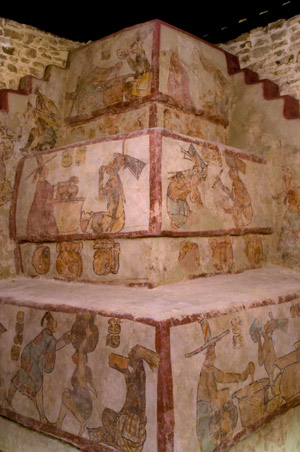 We must also bear in mind that there are always areas which are more susceptible to deterioration due to the weakening of the material, sometimes caused by the presence of salts, which crystallise the surface of the paint, damaging it even further. The growth of crystals within the pores can generate tensions which are strong enough to overcome the resistance to tension of the paint layer and turn it into a powder. This damage is attributed to the mechanisms of crystallisation of the same. Amongst the different types of salts found the sulphates are the most dangerous.

The crystallisation of these salts is generated with the increase of water molecules which create a significant growth in volume which puts pressure on the capillary, causing cracks to appear, weakening the cement material, causing displacement and dustiness. This leads to the inevitable loss of polychrome in the mural painting. Temperatures and high humidity favour the development of most organisms and micro-organisms, as all porous material subjected to the environment is susceptible to attack by colonizing species.

The study of the restoration of mural paintings has used inorganic products such as calcium hydroxide and barium hydroxide which are beneficial to the consolidation of its mineral nature related to the material to be treated as having a lattice structure and many similar physical properties, its duration in time being much more extensive than that provided by synthetic polymers. The deterioration process of polymers seemed more pronounced in a tropical climate creating the layer to harden and also accelerating the oxidation process, as well losing all its effectiveness and causing the formation of an impermeable layer that involves the dissolution and crystallisation of salts inside the paint.

Just before the intervention was about to begin, a thorough study of the state of conservation of the work was carried out, which provided detailed understanding in each field: weakened areas, compacted areas, areas exposed to high humidity, areas susceptible to proliferation of biological agents, areas most sensitive to water evaporation and thus susceptible to salt crystallisation.

One of the principles to be followed was the creation of a cover that would not only protect and preserve the paintings but also integrate the basement to the urban environment, respecting the urban structure, in order to establish a seamless connection between buildings and outdoor spaces. It was therefore attempted to establish a functional renewal which would allow the maintenance of urban harmony and the typology of the construction of buildings. In addition to the cover, the innovative approach of using calcium hydroxide nanoparticles, which implies a reduction in the suspension particles, was applied.

Nanotechnology offers new concepts and materials for the consolidation and protection of wall paintings. This new lime undergoes a slow carbonation reaction that enhances the mechanical strengthening of the support and the layer of paint. The lime, combined with barium hydroxide, completes the transformation of gypsum to form insoluble barium sulphate for the conservation of the cultural property.

In particular, calcium and barium nanoparticles provide a versatile and highly efficient solution. It is a new tool to combat the main degradation processes that alter the murals, particularly those found in tropical climates.
The whole conservation process is being prepared for publication. The dispersal of this methodology will be discussed at the meeting due to take place in Campeche in March 2013, which will bring together all World Heritage Mayan site managers and specialists, which will be coordinated by the World Heritage Centre in the framework of the Periodic Reporting Exercise in Latin America and the Caribbean. World Heritage sites are great analysis and applied conservation research laboratories. I would also say that the inscribed sites should be viewed as permanent research laboratories. Research and conservation must join forces to preserve the remaining Outstanding Universal Value for future generations.