The waters flowing over the limestone and chalk have, over thousands of years, deposited travertine barriers, creating natural dams which in turn have created a series of beautiful lakes, caves and waterfalls. These geological processes continue today. The forests in the park are home to bears, wolves and many rare bird species. 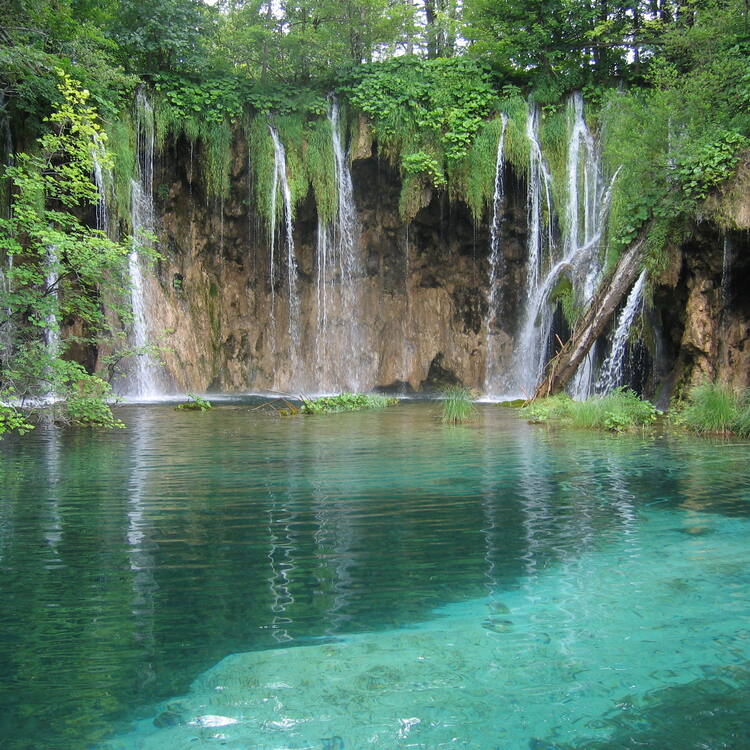 Plitvice Lakes National Park, Croatia's largest national park covering almost 30,000 hectares, is situated in the lower elevations of the Dinarides in the central part of the country. Within a beautiful karst landscape dominated by a mix of forests and meadows, the magnificent Plitvice lake system stands out, fascinating scientists and visitors alike. Interconnected by many waterfalls and watercourses above and below ground, the lakes are grouped into the upper and lower lakes. The former are formed on dolomites, with mild relief, not so steep shores and enclosed by thick forests, whereas the latter, smaller and shallower, are situated in limestone canyon with partially steep shores. The lake system is the result of millennia of ongoing geological and biochemical processes creating natural dams known as tufa barriers. These are formed by the deposition of calcium carbonate from the waters flowing through the property. In the case of the Plitvice lake system, this geochemical process of tufa formation interacts with living organisms, most importantly mosses, algae and aquatic bacteria. The scale of the overall lake system and the natural barriers are an exceptional expression of the aesthetically stunning phenomenon, acknowledged since the late 19th century. Plitvice Lakes National Park area is mainly covered with very well preserved forests essential for the continuity of geochemical processes in water system (above and below ground), which include an area of 84 ha of old-growth forest of beech and fir. Besides the striking landscape beauty and the processes that continue to shape the lakes, the park is also home to noteworthy biodiversity. The tufa barriers themselves provide habitat for diverse and highly specialized communities of non-vascular plants. Brown Bear, Grey Wolf and Lynx along with many rare species roam the forests, while the meadows are known for their rich flora.

Criterion (vii): Embedded in a mosaic of forests and meadows in the lower elevations of the Dinarides, Plitvice Lakes National Park conserves a strikingly beautiful and intact series of lakes formed by natural tufa barriers. The tufa barriers are the result of longstanding and ongoing interaction between water, air, sediments (geological foundation) and organisms. The extension of the dynamic, constantly evolving lake system, the proportion of the tufa barriers, jointly with the numerous dynamic waterfalls and clear water courses and the expression of colours, make Plitvice Lakes National Park an aesthetically outstanding natural spectacle of global importance.

Criterion (viii): The key extraordinary process which has been shaping and continues to shape the Plitvice lake system is the tufa creation which forms barriers across the watercourse. Due to the characteristics of karst base, the waters of Plitvice Lakes are naturally supersaturated with calcium carbonate. Under certain physico-chemical and biological conditions, the dissolved calcium carbonate is deposited on the bottoms and margins of the lakes, as well as on obstacles in the water courses. Over time, this process leads to the formation of porous, simultaneously hard and fragile limestone barriers, which retain the water of creeks and rivers. The lake system is a subject to constant changes largely due to the dynamics of growth and erosion of tufa barriers. A closer look of the barriers reveals the ubiquitous remains of mosses and other terrestrial and aquatic organisms inhabiting the highly specialized habitat. The scale and intactness of the tufa formation phenomena at Plitvice Lakes amount to an outstanding example of a largely undisturbed on-going process. Extensive research on the formation, age and structure and ecological characteristics illustrate the major scientific importance of the property.

Criterion (ix): Overlapping with the above "geological criterion", Plitvice's famous process of the tufa creation is also the result of exceptional ecological processes. Living organisms play a decisive role in the sedimentation of calcium carbonate in Plitvice. More concretely, highly specialized mosses, algae and bacteria enable and enhance the sedimentation, thereby contributing to the creation of the natural barriers. This is why the presence of these easily overlooked organisms and micro-organisms is an integral and essential component of the ancient processes which gave rise to the outstanding lake system. It becomes clear that the process and system requires a water quality that permits the presence of the often sensitive organisms. The extensive tufa formations of the Plitvice Lakes National Park are a testimony of an exceptional interplay between sediments (geological foundation), water, air and living organisms.

Following an extension in 2000, Plitvice Lakes National Park covers the entire catchment area and most of the underground system of the lake system. The lakes, the fragile heart of the property, are surrounded by a belt of well-preserved forest, contributing to the maintenance of water supply and quality and thereby supporting the on-going and dynamic process of calcium carbonate deposition and tufa creation. Logging is prohibited in the forests within the national park, and such legal prohibition is an important measure to maintain the integrity of the Plitvice lake system. A state road crosses the park area but its use is restricted in order to minimize disturbance. It comes as no surprise that Plitvice Lakes National Park attracts impressive numbers of visitors. Inevitably, heavy visitation potentially poses direct and indirect risks to the integrity of the property.

The creation of the "Association for the Conservation and Enhancement of the Plitvice Lakes" in 1893 illustrates a long history of dedication to the best possible conservation of what today constitutes the World Heritage property. Early conservation efforts were formalized when Plitvice Lakes became a national park in 1949. In 1997, the national park was enlarged on the grounds of protecting the entire catchment area of the lakes and most of the groundwater system. Since the extension of the World Heritage property in 2000, the surface area of Plitvice Lakes National Park and the World Heritage property are identical. The majority of the land is state owned. Legally, the property falls under the Nature Protection Act and complementary legislation. A specialized public institution established by the Croatian Government and under supervision of the Ministry responsible for the nature protection, implements management of the national park. Staff, infrastructure and activities are funded from the park’s own resources. Regularly updated, participatory physical and management planning guides all aspects of management and use. An adequately staffed and equipped research centre carries out important research, providing important insights for both science and management.

Plitvice Lakes National Park is well-managed in line with its long history of conservation. The legal, administrative and financial conditions in place need to be maintained and, if needed, consolidated and adapted to respond to the visitation, which is constantly growing. While this puts Plitvice in a privileged position from economic and educational perspectives, the well-documented downsides of tourism require careful consideration. Beyond the risk of direct physical damage to the highly sensitive system, tourism also bears indirect risks stemming from water contamination and excess nutrients through wastewater. As high water quality of the entire freshwater system is a crucial foundation of fundamental processes that underlie the OUV of the property, physical and management planning, education of stakeholders and surveillance of the property are indispensable. Permanent monitoring of the water quality and aquatic organisms.