Karlskrona is an outstanding example of a late-17th-century European planned naval city. The original plan and many of the buildings have survived intact, along with installations that illustrate its subsequent development up to the present day. 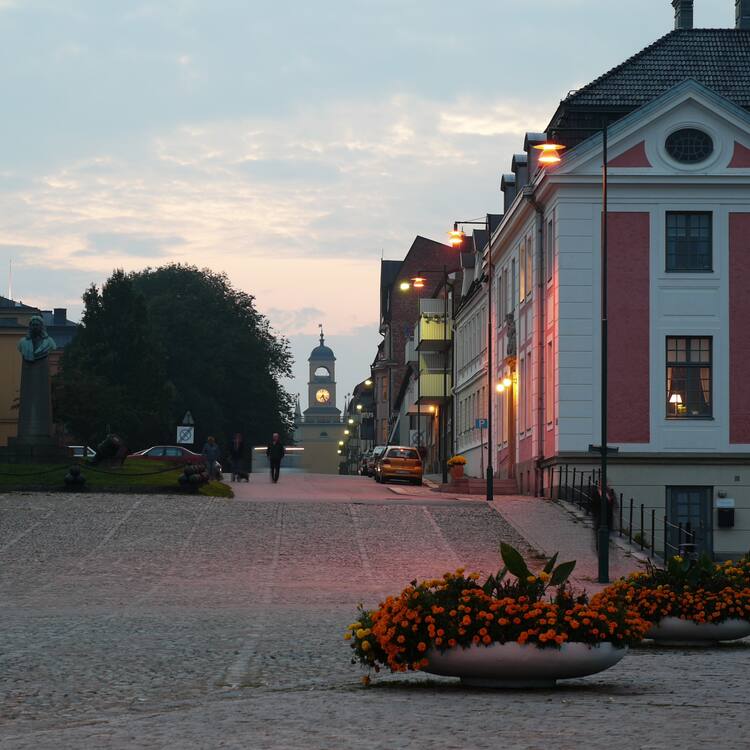 Naval Port of Karlskrona © OUR PLACE The World Heritage Collection

The Naval Port of Karlskrona, a serial property situated on a Baltic Sea archipelago in south-eastern Sweden, is an extremely well-preserved example of a naval city from a time when major European powers secured their positions largely through war and battles at sea. Founded in 1680 by King Karl XI and planned from the outset as a naval city, Karlskrona was built as a new base for the fleet of Sweden, a major power at that time. The city was designed by Quartermaster General Erik Dahlbergh in a grid plan with Baroque features, and included the complete range of necessary functions: naval base facilities, military fortifications and defences, a shipyard, a civil city with trade and administration, supply areas, areas for provisions, and residential areas for groups from various levels of society. The city’s architects and planners were inspired by precedents such as the Venetian Arsenal, the French naval city of Rochefort, and the English city of Chatham. Karlskrona in turn influenced subsequent naval bases and cities of this type.

In addition to the city’s grid plan and built infrastructure, the serial property includes large parts of the island of Trossö, where the naval base and many of its environments and buildings are located; a number of inner and outer fortifications that surround Trossö, which were intended to defend the city and the naval base; as well as Skärfva Manor House and the Crown Mill at Lyckeby, satellites within this larger area that are representative of the hinterland. The Naval Port of Karlskrona, which includes installations that illustrate its subsequent development up to the present day, is the best preserved and most complete of the surviving European naval cities. This is partly because it has not been affected by wars or battles, and partly because it continues to operate as a naval base.

Criterion (ii): Karlskrona is an exceptionally well preserved example of a European planned naval town, which incorporates elements derived from earlier establishments in other countries and which was in its turn to serve as the model for subsequent towns with similar functions.

Criterion (iv): Naval bases played an important role in the centuries during which naval power was a determining factor in European Realpolitik, and Karlskrona is the best preserved and most complete of those that survive.

All the elements necessary to express the Outstanding Universal Value of the Naval Port of Karlskrona are located within the boundaries of the 320.417-ha serial property, including the city of Karlskrona and its grid plan; the naval dockyard and harbour; the inner fortifications at Ljungskär, Mjölnarholmen, Koholmen, Godnatt, and Kurrholmen; the outer fortifications at Drottningskärs Citadel and Kungsholms Fort; and Skärfva Manor House and the Crown Mill at Lyckeby located in the naval port’s environs. The boundaries of the property adequately ensure the complete representation of the features and processes that convey the property’s significance, and there is a 1,105.077-ha buffer zone. The property does not suffer unduly from adverse effects of development and/or neglect. While the city plan is preserved and the original vision for and planned functions of the city are still legible today, the majority of the property is part of a living urban environment facing continual pressures for change.

The Naval Port of Karlskrona is authentic in terms of its location and setting, forms and designs, and materials and substances, as well as some of its uses and functions. Various kinds of cultural environments as well as individual buildings are largely preserved. In 2005, when Karlskrona became Sweden’s national marine port, its role as an active naval port was strengthened. The Swedish authorities believe that the continued use of this historical environment will provide the best protection, and will assist in maintaining the property’s authenticity. Several older buildings and constructions in the port area have been restored in order that they may be reused.

The serial property of the Naval Port of Karlskrona consists of ten components, within which a total of 91 buildings are protected under the Swedish Ordinance for State-owned Listed Buildings. An additional 47 areas with buildings are protected by the Historic Environment Act (1988:950). (Each listing can comprise a number of buildings.) The property is also designated as an Area of National Interest and its cultural environment is protected under the Swedish Environmental Code. Karlskrona Municipality is responsible for preserving the values of this area through physical planning pursuant to the Planning and Building Act (1987). The Blekinge County Administrative Board has supervisory authority over this property. In this role, it is responsible for protecting the attributes that express the Outstanding Universal Value of the World Heritage property by ensuring that the values of the Area of National Interest are not tangibly damaged. The Board may issue statements in this respect when, for instance, Karlskrona Municipality’s detailed plans are circulated for consultation. Actions taken outside the defined Area of National Interest must also ensure that this area’s values are maintained. The Naval Port of Karlskrona is included in the Blekinge Archipelago Biosphere Reserve (UNESCO Man and Biosphere Programme, declared in 2011).

The serial property is owned and/or managed by a combination of public and private concerns. The Swedish Fortification Agency owns and maintains buildings and objects in the military area used by the Swedish Armed Forces, and the National Property Board owns and maintains a number of buildings, including the Drottningskär Citadel. Both owners have long-term conservation plans. The Parish of Karlskrona manages two of the three church buildings; the Municipality of Karlskrona manages the Crown Mill at Lyckeby; and private stakeholders own the Kungshall Storehouse and Skärfva Manor House, among other components. The Blekinge County Administrative Board awards grants for the conservation of privately owned listed buildings. Their maintenance is carried out under the supervision of experts in heritage conservation. A management plan adopted in 2005 and revised in 2009 aims to preserve and develop the Naval Port of Karlskrona.

But because an evaluation of older plans has only just begun, the cultural values in large parts of the World Heritage property are currently not safeguarded. This is evident in regard to the rebuilding of certain protected buildings and in decisions involving newly declared listed buildings. Extensive new construction has taken place in some areas, and additional construction is planned within central parts of the World Heritage property.

Sustaining the Outstanding Universal Value of the property over time will require further protecting its attributes and reformulating the present management plan to ensure that these attributes are managed appropriately in the context of the ongoing development of the city and the continual pressures for change that face this living urban environment.