Bukhara, which is situated on the Silk Route, is more than 2,000 years old. It is the most complete example of a medieval city in Central Asia, with an urban fabric that has remained largely intact. Monuments of particular interest include the famous tomb of Ismail Samani, a masterpiece of 10th-century Muslim architecture, and a large number of 17th-century madrasas. 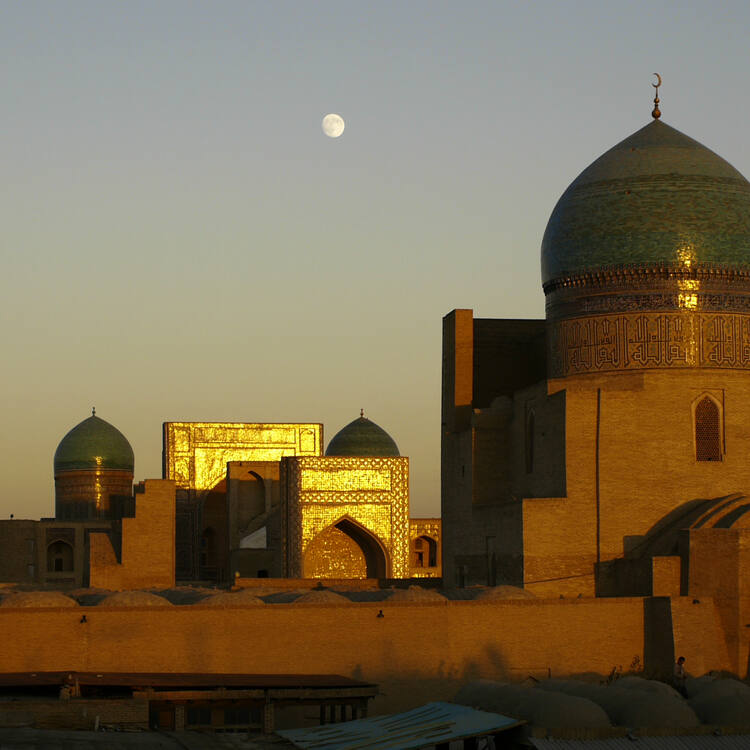 Historic Centre of Bukhara © OUR PLACE The World Heritage Collection

The Historic Centre of Bukhara, situated on the Silk Roads, is more than two thousand years old. It is one of the best examples of well preserved Islamic cities of Central Asia of the 10th to 17th centuries, with an urban fabric that has remained largely intact.

Bukhara was long an important economic and cultural center in Central Asia. The ancient Persian city served as a major center of Islamic culture for many centuries and became a major cultural center of the Caliphate in the 8th century.

With the exception of a few important vestiges from before the Mongol invasions of Genghis Khan in 1220 and Temur in 1370, the old town bears witness to the urbanism and architecture of the Sheibani period of Uzbek rule, from the early 16th century onwards. The citadel, rebuilt in the 16th century, has marked the civic center of the town since its earliest days to the present,

Important monuments that survive from early times include the famous Ismail Samanai tomb, impressive in its sober elegance and the best surviving example of 10th century architecture in the whole Muslim world. From the 11th century Karakhanid period comes the outstanding Poi-Kalyan minaret, a masterpiece of decoration in brick, along with most of the Magoki Attori mosque and the Chashma Ayub shrine. The Ulugbek medresseh is a surviving contribution from Temurid. With the advent of the Sheibanids came some of the most celebrated buildings of Bukhara: the Poi-Kalyan group, the Lyabi-Khauz ensemble, the Kosh Medresseh and the Gaukushon medresseh in the Hodja-Kalon ensemble. Later buildings from this phase of Bukhara´s history include monumental medressehs at important crossroads: Taki Sarafon (Dome of the Moneychangers), Taki-Tilpak-Furushan (Dome of the Headguard Sellers), Tim-Bazzazan, and Tiro-Abdullah-Khan. In the early 17th century fine buildings were added, including a new great mosque, Magoki Kurns (1637), and the imposing Abdullaziz-Khan medresseh (1652).

However, the real importance of Bukhara lies not in its individual buildings but rather in its overall townscape, demonstrating the high and consistent level of urban planning and architecture that began with the Sheibanid dynasty.

Criterion (ii): The example of Bukhara in terms of its urban layout and buildings had a profound influence on the evolution and planning of towns in a wide region of Central Asia.

Criterion (iv): Bukhara is the most complete and unspoiled example of a medieval Central Asian town which has preserved its urban fabric to the present day.

Criterion (vi): Between the 9th and 16th centuries, Bukhara was the largest centre for Muslim theology, particularly on Sufism, in the Near East, with over two hundred mosques and more than a hundred madrasahs.

The property contains all the attributes that sustain its Outstanding Universal Value. Its boundaries and buffer zone are appropriate and adequate. Despite the insensitivity of much of the new construction from 1920 until the 1950s and earthquake damages, Bukhara retains much of its historic ambience and still has a largely intact urban fabric.

However, the integrity of the property is threatened by aggressive impact of salinity and underground water and by termites causing the erosion of wooden structures. In addition, large numbers of the outstanding earthen buildings are in some quarters extremely vulnerable due to the deterioration of the historic fabric.

Bukhara has preserved a great deal of its urban layout that dates from the Sheibanid period. Modern buildings have been erected in the historic centre over the past half-century that have destroyed the appearance of some quarters, but in others the medieval townscape has survived. The proportion of old structures, particularly the public and religious buildings, nonetheless remains high, and the historic centre is unquestionably of outstanding significance as an exceptional example of a largely medieval Muslim city of Central Asia.

In the context of regarding the Historic Centre of Bukhara as an entire entity – expressed through a variety of attributes including urban setting, form and design, use of materials and techniques, functions and tradition – some factors can be recognized as having the potential to impact adversely on the authenticity of the property, namely: (i) the diminishing use of traditional materials and traditional building techniques and introduction of new building materials, as well as new architectural details; (ii) inadequate documentation of major monuments and urban fabric; (iii) urban development pressures resulting in inappropriate designs of new structures.

Relevant national laws and regulations concerning the World Heritage property include the Law on Protection and Exploitation of Cultural Heritage Properties, 2001. Current laws together with urban planning codes provide protection of monuments of cultural heritage and their buffer zones. These documents are reflected in the Master Plan of Bukhara city in 2005. In addition, the Cabinet of Ministers of the Republic of Uzbekistan approved special Decree No. 49 of 23 March 2010 “On State programme on research, conservation, restoration and adaptation to modern use of the cultural heritage properties of Bukhara until 2020”. At present this state programme is being implemented which provides an additional layer for the protection and conservation of the property.

Management of monuments of cultural heritage in Bukhara is carried out by the Ministry of Culture and Sports of the Republic of Uzbekistan at national level and Bukhara Regional Inspection for Protection and Utilization of Monuments of Cultural Heritage and local authorities at regional level.

In the framework of protection of cultural heritage of the historic centre of Bukhara, Cabinet of Ministries of the Republic of Uzbekistan adopted a State Programme for complex activities on research, conservation, restoration of monuments of cultural heritage of the Historic Centre of Bukhara and their adaptation to the modern needs for the period 2010-2020. Interventions are strictly regulated in order to ensure the integrity and characteristic elements of monuments. During the realization of the State Programme the monitoring of monuments will be carried out on a permanent base. A management plan, which should include a computerized database, a Master Conservation and Development Plan, a scientific monitoring system, an infrastructure plan, design guidelines, and guidelines and regulations for all tourist services, is required in order to sustain the Outstanding Universal Value of the property and balance the needs for sustainable development. To maintain the conditions of integrity and authenticity, a comprehensive conservation strategy needs to be in place, in particular, to remove cultural layers built on later periods and to reduce the surface of streets to their historical level. Another important aspect is to build capacity in traditional building techniques. At present Urban Planning Scientific-Research and Project Institute is developing a project of detailed planning of historic centre of Bukhara, which will further address these issues. 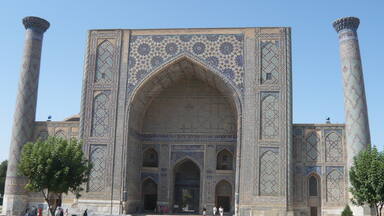