Abbey and Altenmünster of Lorsch

Abbey and Altenmünster of Lorsch

The abbey, together with its monumental entrance, the famous 'Torhall', are rare architectural vestiges of the Carolingian era. The sculptures and paintings from this period are still in remarkably good condition. 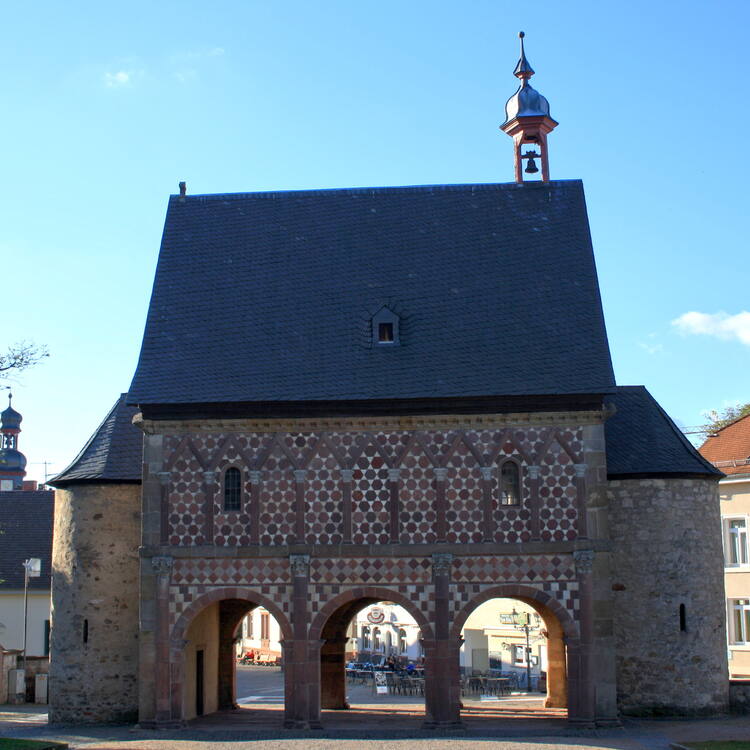 The town of Lorsch in Hesse, Germany, hosts the renowned “Königshalle”. Apart from the Gothic gables and a few relics of past repairs and completion, this gatehouse is one of the very rare buildings from the Carolingian era whose original appearance is intact. It is a reminder of the past grandeur of an abbey founded around 764. The monastery’s zenith was probably in 876 when, at the death of Louis II the German, it became the burial place for the Carolingian kings of the Eastern part of the Frankish Realm.

The monastery flourished throughout the 11th century, but in 1090 was ravaged by fire. In the 12th century, an expansive reconstruction was carried out. After Lorsch had been incorporated in the Electorate of Mainz (1232), it lost a large part of its privileges. The Benedictines were replaced first by Cistercians and later by Premonstratensians. Moreover, the church had to be restored after yet another fire and be adapted to changing liturgical needs. The glorious Carolingian establishment slowly deteriorated under the impact of the vagaries of politics and war: Lorsch was attached to the Palatinate in 1461, returned to Mainz in 1623, and incorporated in the Electorate of Hesse in 1803. Monastic life finished in succession of the protestant reformation of the Palatinate in 1556.

Criterion (iii): The religious complex represented by the former Lorsch Abbey, with its 1200-year-old gatehouse in unique and excellent condition, comprises a rare architectural document of the Carolingian era with impressively preserved sculpture and painting of that period.

Criterion (iv): The Lorsch Abbey, with its Carolingian gatehouse, gives architectural evidence of the awakening of the West to the spirit of the Early and High Middle Ages under the first King and Emperor, Charlemagne.

In the case of the Abbey and Altenmünster of Lorsch, the integrity is related to the architectural remains, i.e. the entrance hall and main body of the Abbey church, documenting an astonishing variety of architectural styles. The Abbey wall and the commercial constructions following the heyday of the Abbey provide an example and – to a certain extent – represent symbols of the rise, glory, and fall of one of Europe’s great Abbeys, of which not one has remained preserved. Never having been superstructured, at least two thirds of the Abbey’s area represents an intact archaeological site, preserving the material relics of more than 800 years of monastic life. Together with the monumental remains and the conserved fragments of the ancient library, the cultural heritage of Lorsch Abbey has been one of the most powerful and active spiritual centers in Central Europe for several centuries.

The Abbey and Altenmünster of Lorsch fulfils the conditions of authenticity through the preserved buildings themselves, in particular through the “Königshalle”, which still represents the best preserved and largely intact surviving example of architecture of the Carolingian era in Central Europe.

All the buildings are maintained, preserved, researched, and presented with the greatest possible care. The sculptures and paintings from this period are still in remarkably good condition.

The laws and regulations of the Federal Republic of Germany and the State of Hesse guarantee the consistent protection of the Abbey and Altenmünster of Lorsch and its surroundings. Both are listed monuments according to the Act on the Protection of Cultural Monuments in the State of Hesse. The Hessian building code regulates the realisation of single building projects. The land-use plan, as well as building plans and the preservation statute of the city of Lorsch, guarantees the protection of the visual integrity. Complemented by the management plan, this differentiated protective system ensures an efficient preservation of the historical substance in good condition. The buffer zone underwent a minor boundary modification to further ensure the protection of the site.