The Pont du Gard was built shortly before the Christian era to allow the aqueduct of Nîmes (which is almost 50 km long) to cross the Gard river. The Roman architects and hydraulic engineers who designed this bridge, which stands almost 50 m high and is on three levels – the longest measuring 275 m – created a technical as well as an artistic masterpiece. 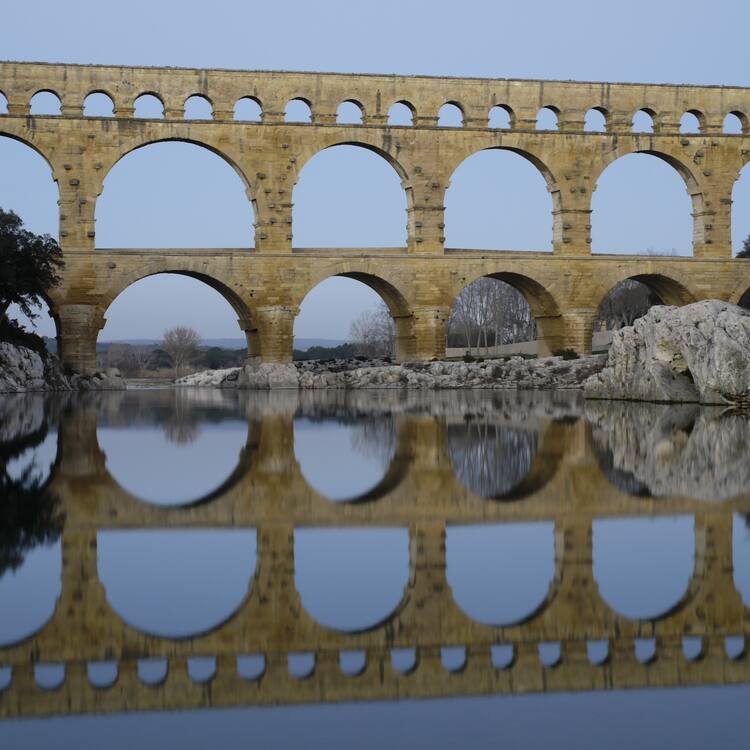 Located in the Occitanie region, the Pont du Gard is the major element of a 50.02 km aqueduct built in the middle of the 1st century to supply the city of Nîmes, the ancient Roman colony of Nemausus, from the Eure source located near Uzès. A three-storey aqueduct bridge rising to nearly 48.77 m, it enabled the water conduit to cross the Gardon River.

This triple bridge, whose longest floor, at the very top of the edifice, measured 360 m, is a feat and a masterpiece of Roman architectural technique, but also a work of art whose presence transfigures the landscape. Set in a natural site that enhances its imposing appearance and its lines of force, the Pont du Gard rests on a rocky base, notched by the river spanned by its major arch. The gentle and symmetrical tapering of the arches, the span of the lower arches and the regularity of the upper gallery give it an extraordinarily airy appearance for a work of such magnitude.

The Pont du Gard is an outstanding example of bridges built in ancient times. It achieves a triple performance with its three levels of arches of unequal dimensions and is characterized by the use, for the construction of the arches of the lower levels, of juxtaposed rollers composed of voussoirs bearing engraved positioning marks. In the series of Roman aqueducts, this exceptional edifice is the result of an extensive adaptation to the river regime of the Gardon whose floods are sudden and devastating. The lips installed in front of the piers are designed to resist high water, and the opening of the principal lower arch (24.52 m instead of 21.87 m for the arches of the extremes) facilitates the flow of water.

Built, on the first two levels, of large stone blocks and, at the upper level, of small stone rubble which hold the abutting flagstones of the canal, the Pont du Gard is one of the most revealing monuments as to the construction processes of the early Imperial era. On the dressing of the stone can still be seen the marks of the quarrymen’s and stonecutters’ tools, and sometimes the coding of the stones, with figures and letters, showing their position in the assembly schema. The precision in execution meets to perfection a challenging design, and the Pont du Gard has, ever since the 16th century, been considered as one of the major accomplishments of the Roman civilization.

Criterion (i): The Pont du Gard is a masterpiece of Roman technique and an outstanding artistic achievement which, by its presence, transfigures the landscape.

Criterion (iii):  An exceptional building in the series of Roman aqueduct works, the Pont du Gard bears unique witness to the technique of Roman engineers and builders in the service of urban and territorial development, which is one of the characteristics of this civilization.

Criterion (iv): The Pont du Gard is one of the most representative works of the construction processes of the Roman imperial era.

During the Middle Ages, the ancient structure lost a great number of stones; upstream of the upper arcade, twelve arches have disappeared. It was also during the Middle Ages that the bridge was adapted to the passage of men and beasts: a path was built and the piles of the second level were cut away over half of their thickness, threatening the stability of the edifice. Despite these spoliations, the remarkable state of conservation of the Pont du Gard must be emphasized.  In the years 1699-1702, the piers were repaired, and corbels were built at the level of the piers to allow for the passage of the road.

Finally, in 1746, the construction of a road bridge attached to the first level of the Roman bridge was entrusted to the engineer Henri Pitot, who had the concern to adjust his work as exactly as possible to the ancient bridge.

The exceptional ingenuity of the design of the Pont du Gard remains apparent in its slightly curvilinear layout, and the lips installed in front of the piers attest to the efforts made to adapt its construction to the river regime of the Gardon. The property is one with the richest information on the construction processes of the early Roman imperial period as shown by its refined stonework, the assembly of the blocks which still bear the marks of the quarrymen’s and stonecutters’ tools, as well as the coding for assembly. The quarry from which the stones were extracted is preserved some 600 metres from the site.

The aqueduct of Nîmes ceased to function around the beginning of the 6th century and the Pont du Gard never regained its original use.

Since the end of the 17th century and up to the present day, the Pont du Gard has been the subject of numerous restoration campaigns which have consecrated it in its splendid isolation as an insignia monument, witness of the Roman civilization. It is located at a distance from the villages that today are home to a population of 4500 inhabitants, and only two buildings were erected in its immediate vicinity in 1865 and 1901: a flour mill turned restaurant on the left bank, and a hotel on the right bank.

The Pont du Gard benefits from conservation work directly determined, financed and implemented by the Ministry of Culture. A public establishment for cultural cooperation (EPCC) created in 2003 manages the monument, its site, and associated facilities. The Pont du Gard EPCC associates the State, the Occitanie Region, the Department of Gard and the three communities bordering the site (Castillon du Gard, Remoulins, Vers Pont du Gard). 78% of its financial resources are provided by self-financing (entry fees to the facilities) and 22% by statutory contributions from local authorities.

A scientific council and a property committee in charge of governance, associating the EPCC establishment, the local authorities and the State, have been set up. The management plan for the Pont du Gard and its buffer zone (691 hectares) is being drafted. 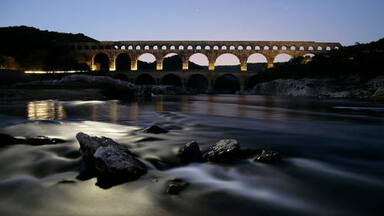