Situated 900 m above sea-level, Djémila, or Cuicul, with its forum, temples, basilicas, triumphal arches and houses, is an interesting example of Roman town planning adapted to a mountain location. 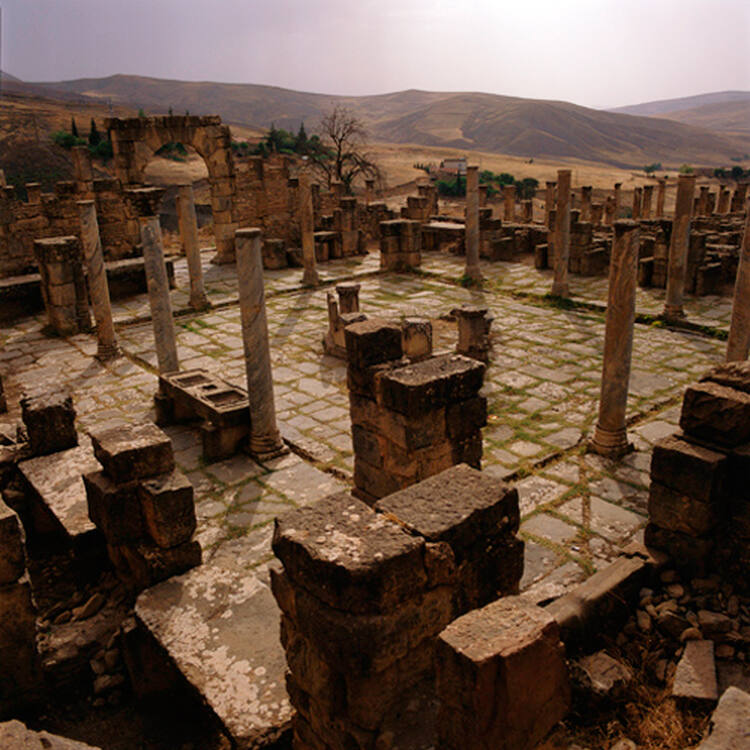 Situated 900 m above sea-level, Djémila, or Cuicul, with its forum, temples, basilicas, triumphal arches and houses, is an interesting example of Roman town planning adapted to a mountain location. © UNESCO

The site of Djémila is located 50 km north-east of the town of Sétif. Known under its antique name Cuicul, Djémila is an establishment of an ancient Roman colony founded during the reign of Nerva (96 - 98 A.D.). The Roman town occupied a singular defensive position. Cuicul is one of the flowers of Roman architecture in North Africa.  Remarkably adapted to the  constraints of the mountainous site, on a rocky spur which spreads at an altitude of 900 m, between the wadi Guergour and the wadi Betame, two mountain torrents, the town has its own Senate and Forum. Around the beginning of the 3rd century, it expanded beyond its ramparts with the creation of the Septimius Severus Temple, the Arch of Caracalla, the market and the civil basilica. The site has also been marked by Christianity in the form of several cult buildings: a cathedral, a church and its baptistry are considered among the biggest of the Paleochristian period. The site of Djémila comprises an impressive collection of mosaic pavings, illustrating mythological tales and scenes of daily life.

Criterion (iii): Djémila bears exceptional testimony to a civilization which has disappeared. It is one of the world's most beautiful Roman ruins. The archaeological vestiges, the well integrated Roman urban planning and the surrounding environment comprise the elements that represent the values attributed to this site.

Criteron (iv): Djémila is an outstanding example of a type of architectural ensemble illustrating a significant stage in Roman history of North Africa, from the 2nd to the 6th centuries. In this instance, the classic formula of Roman urban planning has been adapted to the geophysical constraints of the site.  The site comprises a very diversified typological and architectural repertoire with a defensive system and Arch of Triumph, public convenience and theatre buildings, facilities for crafts and commerce, including the market of the Cosinus brothers that constitutes remarkable evidence of economic prosperity of the city.

The site, fenced in following the boundaries presented at the time of inscription on the World Heritage List, contains all the elements necessary to express its Outstanding Universal Value. These attributes comprise among others, the classic formula of Roman urban planning with two gates located at each end of the Cardo Maximus; in the centre, is the Forum surrounded by buildings essential to the functioning of public life: the Capitoleum, the Curia, a civil basilica, the Basilica Julia. The vestiges of the Temple of Venus Genitrix and aristocratic residences richly decorated with mosaics are also visible. Vestiges of monuments that have marked the expansion of the city to the south are also included. They comprise private dwellings and public buildings such as the Arch of Caracalla (216), the Temple of Gens Septimia (229), a theatre with a capacity of 3,000 places, baths, basilicas and other cult buildings. The archaeological vestiges have remained surprisingly intact over the centuries. Conservation of the site is not threatened by tourism. However, it is under threat from earthquakes, drought, fire, vandalism, robbing and looting, illegal grazing, illegal constructions and badly integrated infrastructure.

The archaeological vestiges excavated since 1909 bear true and credible testimony to Roman town components such as the classic plan of the Roman town and urban fabric, and architecture such as construction methods (roads, gates, aqueduct, colonnaded temple, theatre, etc.), decoration (bas-reliefs, borders and pediments, capitals of columns, mosaics etc.) and construction material (stone, mosaic, ceramics, etc.) that represent the Outstanding Universal Value of the property. Some restoration work on the mosaics in the site museum has been carried out in recent years.

The protection measures foreseen to preserve the values of the property mainly concern the construction of a peripheral fence around the site, the restoration of damaged mosaics and the renovation of the site museum (completed).  It is also hoped that the enforcement of current regulations and a regular monitoring activity of the site will be implemented.

Although deterioration causes increasing damage to the fragile archaeological structures (low walls), globally the values are well conserved.  The need for funds and international assistance is still very important for the implementation of the management plan and presentation of the site, revised annually.  Each year, 30,000 visitors and some 15,000 students visit the site. 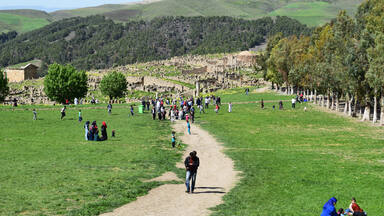