The Portuguese fortification of Mazagan, now part of the city of El Jadida, 90-km southwest of Casablanca, was built as a fortified colony on the Atlantic coast in the early 16th century. It was taken over by the Moroccans in 1769. The fortification with its bastions and ramparts is an early example of Renaissance military design. The surviving Portuguese buildings include the cistern and the Church of the Assumption, built in the Manueline style of late Gothic architecture. The Portuguese City of Mazagan - one of the early settlements of the Portuguese explorers in West Africa on the route to India - is an outstanding example of the interchange of influences between European and Moroccan cultures, well reflected in architecture, technology, and town planning. 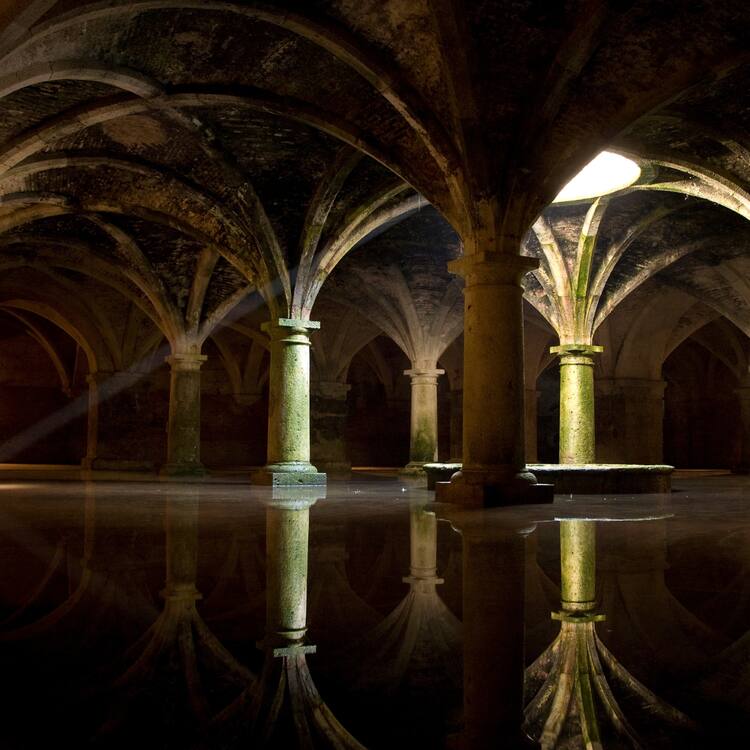 The Portuguese City of Mazagan (El Jadida), one of the first settlements created in Africa by Portuguese explorers on the route to India, bears outstanding witness to the exchange of influences between European and Moroccan cultures from the 16th to the 18th centuries, which are evident in the architecture, technology and town planning. Mazagan was built as a fortified colony on the Atlantic coast at the beginning of the 16th century. Located 90 km south of Casablanca, it dominates a natural bay of great beauty.  The brothers Francisco and Diogo de Arruda built the first citadel in 1514. In 1541- 1548, in accordance with the plans of the Italian architect Benedetto da Ravenna, Joao Ribeiro and Juan Castillo enlarged the citadel transforming it into a star-shaped fortification.

The Mazagan fortress with its ditch and inclined ramparts is one of the first testimonies in the Lusitanian period of the application by Portuguese technology of new architectural concepts of Renaissance adapted to the advent of the firearm. Complete and unique witness in Morocco to the advent of this new style, Mazagan is better preserved than other Portuguese fortifications in Morocco; most of the other Portuguese trading posts in the world having suffered many changes.

Following the departure of the Portuguese in 1769 and the resulting abandon of the city, the fortress was rehabilitated in the middle of the 19th century and named El Jadida (The New), and became a commercial centre and a multicultural society, embracing Muslims, Jews and Christians.

The shape and the layout of the fortress have been well preserved and represent an outstanding example of this category of construction.  The historic fabric inside the fortress reflects the different changes and influences over the centuries. The existent monuments of the Portuguese period are: the ramparts and their bastions, the cistern, an outstanding example of this type of structure, and the Catholic Church of the Assumption, of late Gothic style, the Manoeline style at the beginning of the 16th century.

Criterion (ii): The Portuguese City of Mazagan is an outstanding example of the exchange of influences between the European and Moroccan cultures from the 16th to 18th centuries, and one of the very first settlements of Portuguese explorers in West Africa on the route to India. These influences are clearly reflected in the architecture, technology and urban planning of the city.

Criterion (iv): The fortified Portuguese city of Mazagan is an outstanding example and one of the first, representing the new design concepts of the Renaissance period integrated with Portuguese construction techniques.  Among the most remarkable constructions of the Portuguese period are the cistern and the Church of the Assumption, built in the Manoeline style at the beginning of the 16th century.

The boundaries of the buffer zone and the protection zone of the Portuguese City of Mazagan as described in the documents submitted to the World Heritage Committee provide all the necessary elements for its integrity. The Portuguese fortifications of Mazagan, built in two phases (1510-1514 and 1541-1548), are impressive by their monumentality and their styles. They have conserved their original structure and architectural harmony to this day.  The emblematic monuments (ramparts, bastions, cistern, and churches) are well preserved.

The outline of the city dominating the views above the port area is an essential characteristic that needs to be conserved. The urban zone surrounding the old city of Mazagan must be closely monitored in order to check any change or new construction.

Always inhabited, the city presents all the conditions of authenticity that have justified its inscription on the World Heritage List. Many monuments have been rehabilitated giving them a new compatible function in the spirit of the integrated safeguarding programme carried out by the Ministry of Culture, the Province and the Urban Agency. The population of the city is fully involved and concerned with the conservation and presentation of this important Morocco-Portuguese historical place, aware that this heritage belongs to all humanity.

The protection measures essentially concern the different laws for the listing of historic monuments and sites, in particular Law 22-80 (1981) for the conservation of Moroccan heritage.  The area of the ancient ditch of the fortifications, today filled in, has been declared a 50m-wide non aedificandi zone. Since its inscription in 2004, the Specifications for architectural regulations were adopted to strengthen legislation already in force.  The city has enjoyed a regular programme of restoration work. Development work began in October 2008 for the presentation of the port and to improve the visibility of the fortress, free the east side of the fortifications and uncover the ditches.  The Morocco-Lusitanian Heritage Centre for Study and Research (CERPML), the principal institution responsible for the management of the property, has already begun the development of a management plan and the establishment of a management committee in coordination with its partners.

Maintenance of the visual integrity as regards the urban zone of El Jadida and the harmonious relation between the Portuguese city and the modern town that surrounds it are a constant concern that requires control of the height of constructions both inside and outside the buffer zone.