The ability to evolve is one of the main strengths of the World Heritage Convention. While the Convention itself is essentially set in stone, the flexibility of the Operational Guidelines, through which the provisions and principles of the Convention are implemented, reflect the evolution of notions and processes and include new ones. These enrich the Convention while remaining true to its spirit.

The new concept of the Upstream Process was introduced in 2010, upon considering the difficulties experienced with some challenging nominations. This process is groundbreaking in that it enables the Advisory Bodies and the Secretariat to provide advance support in the form of advice, consultation and analysis, directly to States Parties prior to the preparation or submission of a nomination. The main aim of the Upstream Process is to reduce significant problems encountered during the evaluation process for more challenging nominations.

This process was first implemented through a series of pilot projects and subsequently extended, as States Parties’ interest grew and the number of upstream support requests steadily increased. Recognising that the Upstream Process is now accepted as an integral part of the nomination process, the World Heritage Committee, at its 39th session (Bonn, 2015), officially integrated it into the Operational Guidelines by including an official definition of this process and amending Paragraphs 71 and 122. 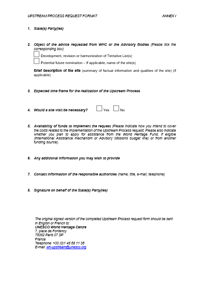