State of Conservation Ruins of the Buddhist ... 2008
Print

a) Lack of an effective management system;

b) Lack of adequate human and financial resources;

The State Party’s report, received on 6 March 2008, provides information on the implementation of the decisions by the 31st session of the World Heritage Committee (Christchurch, 2007) as follows:

a) The project to define the boundaries of the property and its buffer zone, which was planned as part of the long term programme, has not been carried out by the Department of Archaeology because of the lack of human resources and skills required for the mapping. The State Party underlines that it would require International Assistance to be able to undertake this activity;

b) The heritage management plan as well as the study of the drainage problems are in progress and will be implemented as soon as the final report of international experts on drainage problems has been received;

c) On the basis of recommendations made following meetings between the Department of Archaeology and international experts, the removal of earth from the temple area as well as excavations to open the staircase of the temple on its northern side are being carried out. In addition, maintenance repairs to address the drainage problems as well as the preservation of some of the temple walls are also being implemented.

The World Heritage Centre and the Advisory Bodies acknowledge that there is a long history of study and interventions on the drainage issue but reasonable solutions to control the damage caused by water and humidity are still to be elaborated. In this context, the World Heritage Committee approved a sum of USD 45,000 in 2005 for a study of remedial actions for the drainage problems, and for the monitoring of the internal moisture conditions. It is understood that this project has started and that a seminar on the study is scheduled for May 2008. Some of the recommendations from the expert missions are being implemented by the Department of Archaeology.

The lack of a Statement of outstanding universal value and proper boundaries are issues that have been raised by the World Heritage Committee since 2005 but no progress appears to have been made so far.

On 22 April 2008, the UNESCO Office in Dhaka provided updated information concerning the study of the drainage problems. The considerable delay in its implementation, which has only started, is apparently caused by insufficient staffing in the Department of Archaeology, whose capacity would need to be strengthened if the above-mentioned activity is to be carried out successfully. Based on this assessment, it would seem unlikely that this activity can be completed within the given timeframe. For this reason, an additional one year extension of the deadline is proposed.

In view of the fact that this project was launched in 2005 and the deadline for its completion already extended, and taking into account the above-mentioned weakness of the Department of Archaeology, the World Heritage Centre considers that no further prolongations of this project should be made under the current circumstances. Should the activity not be carried out by the end of 2008, as currently foreseen, the World Heritage Centre recommends that the project be terminated and the overall situation reassessed in close consultation with the State Party and the UNESCO Office in Dhaka.

The Ruins of the Buddhist Vihara at Paharpur (Bangladesh) (C 322)

3. Notes the lack of progress in the implementation of the activity concerning the drainage problems and the development of a management plan;

4. Expresses its serious concern about recent works carried out at the site concerning the installation of draining pipes along the main stupa of the Pararpur Vihara and light fittings in its immediate vicinity, which appear to have had a negative impact on the heritage values of the property;

5. Requests the State Party of Bangladesh to suspend the above-mentioned works and implement the appropriate mitigating measures to prevent possible deterioration of the property until the situation is reassessed, as well as to invite a joint World Heritage Centre/ Advisory Bodies Reactive Monitoring mission to the property, preferably before the end of 2008, in order to:

a) assess the state of conservation of the property and particularly the impact of water and humidity on the brick masonry;

b) review the effectiveness of the management system in place.

6. Urges the State Party to strengthen the capacity of the Department of Archaeology by providing it with adequate human and financial resources;

7. Also requests the State Party to continue its efforts towards the definition of the boundaries, the solution of the drainage problems and the overall strengthening of the management system at the property;

8. Encourages the State Party to submit a request for International Assistance to undertake a project to define the boundaries of the property and the buffer zone;

3. Notes the lack of progress in the implementation of the activity concerning the drainage problems and the development of a management plan;

4. Urges the State Party to strengthen the capacity of the Department of Archaeology by providing it with adequate human and financial resources;

5. Requests the State Party to continue its efforts towards the definition of the boundaries, the solution of the drainage problems and the overall strengthening of the management system at the property; 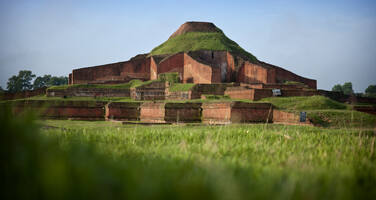