a) Lack of a proper buffer zone

b) Lack of a management plan

The World Heritage Centre and the Advisory Bodies were alerted through press reports to the granting in February 2010 of a coal mining permit to an Australian company, Coal of Africa Ltd (CoA), in an area immediately to the east of the Mapungubwe Cultural Landscape World Heritage property. The proposed Vele Colliery is located 50 km west of Musina, an area about 7 km from the property boundaries. The mining licence is for the extraction of coal that will be used to feed a coal–fired power station for which there is also a proposal. The press reports indicated that the mining permit was issued by the Department of Minerals and Energy against a recommendation of the Department of Environmental Affairs that overseas the Limpopo-Shashe Transfrontier Conservation Area (TFCA) and the Mapungubwe Cultural Landscape.

Mapungubwe Cultural Landscape extends to 30,000 ha and to its north borders the Limpopo River that separates South Africa from Botswana and Zimbabwe. The property is protected by a buffer zone of 100,000 ha that was stated in the nomination to surround the property south of the international border. At the time of inscription, a Trilateral Memorandum of Understanding had been drawn up between South Africa, Botswana and Zimbabwe with the objective of establishing the TFCA; this very extensive area of some 5,040 km2 would surround the property when established, and would, it was said, constitute a very effective buffer zone. Subsequently an agreement of understanding between the three countries has been signed and what remains to be done is for the treaty to be compiled. It appears that land claims by the Machete family have held up progress. They laid claim to the whole of the Mapungubwe Cultural landscape and 56 nearby farms and their claim has apparently been upheld in the courts. The proposed location of the mine and power station will be in the middle of the planned TFCA.

No formal map was submitted as part of the nomination for either the buffer zone or the TFCA – only the description of both areas. At the World Heritage Committee, the property was recommended for referral to allow for better maps to be provided but in the event a decision was made to inscribe. Subsequent maps have been produced within South Africa of both the buffer zone and the TFCA, but these do not show either area surrounding the property, and both having exclusion areas to the east of the property where the proposed mine and power station are to be sited. These proposals therefore appear to be at variance with what was put forward at the time of nomination.

The proposed mine was the subject of an Environmental Impact Assessment (EIA). However according to information received by the World Heritage Centre, this appears to have failed to adequately assess the full impact on the cultural and natural environment. The base-line date appears to be deficient, many ancillary aspects of the development have not been addressed, inadequate mitigation proposals have been put forward and the World Heritage Centre and the Advisory Bodies have not been consulted.

In terms of the natural environment independent consultants undertook a desk assessment of the relevant documents and concluded that the impact assessments had not adequately identified the impact on quantity and quality of water resources and as a result mitigation measures were lacking. For instance proposed de-watering of an aquifer could have a severe effect on farmers on the South African side of the Limpopo River who use the aquifer for irrigation and subsequently on food security.

In terms of the cultural environment, the impact assessment was based on a superficial survey of the area and did not consider the impact on the World Heritage property. On 18th March 2010, the Association of Southern African Professional Archaeologists (ASAPA) lodged an appeal against the decision to grant the mining right. The Appeal is on the grounds that the EIA was insufficient and that the link between the study area and the World Heritage property was not fully considered. Recent research has indicated that the area to the east of the property has strong links to the areas within the boundary such as the extensive rock art both within the property and in the proposed mining area, and extensive Stone Age and Iron Age remains. The Appeal also states that it considers that the development will lead to industrialization of the area, that it will have a permanent negative impact on the integrity of the heritage and natural landscape, that the impact on the archaeological sites and places of intangible significance will be permanent, and that there will be a profound negative impact on the sense of place of the Mapungubwe Cultural Landscape. Overall they conclude that the entire Vele Basin area is of great importance and the potential development of a coal mine on even a small portion of this landscape is detrimental in terms of the generation of knowledge of the archaeological heritage of the whole region.

The Appeal also highlights the international implications of the proposals as both the Botswanan and Zimbabwean Governments are investigating the possibility of extending the World Heritage status to include areas related to the Mapungubwe Cultural Landscape in their respective countries as part of the TFCA process.

Two locations have been considered for a power station near Musina. An environmental impact assessment of the sites concluded that little is known about the occurrence of heritage resources in the study area per se although it was likely that Stone and Iron Age sites would be found. It recommended that the proposed development could continue subject to an archaeological survey once work commences.

In April 2010 it was reported in the press that the order for the mining right was finalised on 12th March 2010 giving CoAl "unconditional" approval to start development of the Vele project which it was stated would be completed by the third quarter of the year. However on 12th May 2010 the press reported that ‘Giant baobabs and several hectares of indigenous forest’ had been flattened by the mining company, without having obtained the necessary water licence or environmental approval or approval for the building of a road to the site where the mine will be built.

Further press reports have suggested that mining companies have acquired farms even nearer the boundary of the property with a view to extending mining operations.

No information has been forthcoming about the status of the Appeal nor the position of the Department of Environmental Affairs that has responsibility for the property.

The World Heritage Centre and the Advisory Bodies are extremely concerned about the potential impact of the proposed mine, power station and ancillary development on both the Mapungubwe Cultural Landscape property and on its hinterland. The mining area is a highly sensitive cultural area that relates closely to the attributes within the property and provides its context and approach and is also a highly sensitive natural area that is inextricably linked to the wider landscape. In terms of both culture and nature, any development of this site could have far reaching implications for the sustainability of the Limpopo Basin, could de-rail international agreements on the TFCA and could completely destroy a landscape that has the potential to contribute significantly to an understanding of the wider settlement history of Mapungubwe. It could also pollute the Limpopo river which crosses the property.

The proposed development highlights the lack of clarity over responsibilities for the protection of the property, as set out at the time of inscription, and the lack of clarity over the buffer zone, as described at the time of inscription. The developments also appear to put into question future possible collaboration with Botswana and Zimbabwe over the proposed TFCA.

2. Takes note of the detailed information provided by the State Party in the state of conservation report of the property;

3. Expresses concern at the granting of a mining licence for coal 5 km from the boundary of the property, in a highly sensitive area adjacent to the Limpopo river and in the proposed buffer zone that was submitted at the time of the inscription, and which is fundamentally linked to the protection of the Outstanding Universal Value of the property in terms of both cultural and natural attributes;

6. Also requests the State Party to invite a joint World Heritage Centre/Advisory Bodies reactive monitoring mission to consider the implications of the proposed mining on the Outstanding Universal Value of the property, and the establishment of an effective buffer zone for the property;

8. Further requests the State Party to submit to the World Heritage Centre by 1 February 2011 an updated report on the state of conservation of the property including details of the status of the mining license for examination by the World Heritage Committee at its 35th session in 2011.

2. Regrets that the State Party has not provided a report on the mining project and its implications as requested by the World Heritage Centre in its letter of 9 March 2010;

3.  Expresses extreme concern at the granting of a mining licence for coal some 5 km from the boundary of the property, in a highly sensitive area adjacent to the Limpopo river and in the proposed buffer zone that was submitted at the time of the inscription, and which is fundamentally linked to the protection of the Outstanding Universal Value of the property in terms of both cultural and natural attributes;

4. Recognises that the proposed development does not appear to have the support of the Department of Environmental Affairs that has overall responsibility for the property, and also takes note of the concerns raised by NGOs and the appeal against the licence that has been brought by the Association of Southern African Professional Archaeologists;

5. Also notes that it has been reported that the ownership of the property has been claimed by a private landowner and requests the State Party to clarify what implications this might have for the management of the property as well as to clarify the exact delimitation of the buffer zone;

6. Also requests the State Party to invite a joint World Heritage Centre/Advisory Bodies reactive monitoring mission to consider the implications of the proposed mining on the Outstanding Universal Value of the property, and the establishment of an effective buffer zone for the property;

7. Urges the State Party to halt the mining project until the joint World Heritage Centre/ Advisory Bodies mission has assessed the mining impact, and to submit as soon as possible details on the status of the mining licence, the status of the Appeal, the position of the Department of Environmental Affairs and fuller details of ancillary projects;

8. Further requests the State Party to submit to the World Heritage Centre by 1 February 2011 an updated report on the state of conservation of the property including response to the above for examination by the World Heritage Committee at its 35th session in 2011. 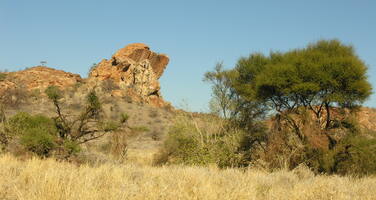