On 28 January 2020, the State Party submitted a state of conservation report on the property (available at https://whc.unesco.org/en/list/1139/documents/, providing the following information in response to Committee Decision 43 COM 7A.55:

The progress achieved by the State Party for the conservation of the property is commendable, notably thanks to International Assistance, enabling important actions to be implemented for the repair of the roof of the men’s prayer room, the reduction of water erosion, and the plantation of hasu trees. The immediate reaction of the Cultural Mission of Gao in response to the request of the Committee in 2019 to avoid planting eucalyptus trees within the property, which would have been likely to weaken it, and replacing them with hasu trees, should be appreciated, as it demonstrates efficient communication between the different stakeholders.

Support efforts on the part of the State Party, particularly through the Cultural Mission, to establish partnerships such as the one signed with the Italian Archi-Media-Truste-Onlus Organization that mobilizes funds from various donors such as MINUSMA, African World Heritage Fund (AWHF), ALIPH, and the Blue Shield International Committee in order to strengthen local capacities for an improved conservation and management of the property, document its components, and thus contribute towards future conservation measures, should also be applauded. The State Party has also submitted a rehabilitation project for the property funded by ALIPH to an amount of 500,000 US dollars. It is noted and appreciated that the project objectives aim to achieve significant progress in accomplishing at least six corrective measures (out of nine) with a considerable positive impact on conservation, management, and the use and knowledge of the property. However, it is recommended that the Committee encourages the State Party to cooperate with the different partners and donors concerning the projects developed for the mobilization of funds to ensure greater coherence between the actions proposed and to establish a consultation between these partners for efficient follow-up.

The details submitted with regard to the ALIPH project in response to the Committee request and the information that work should begin in February-March 2020 has been noted. A meeting was organized by the World Heritage Centre with the State Party, the partner CRAterre, ICOMOS, ICCROM, and the Bamako Bureau in order to clarify certain points of concern, notably relating to the projects to lighten the roof of the men’s mosque and the creation of a new covering structure. This meeting provided improved understanding of the nature of interventions and agreement on future information sharing, to be facilitated by the UNESCO Bureau in Bamako, which is a member of the Pilot Committee for the project.

Nevertheless, it is recommended that the Committee request the State Party to keep the World Heritage Centre informed with regard to the development of two parking areas foreseen in front of the main gate of the property and behind the road. This project should be submitted for examination by the Advisory Bodies before the work begins to ensure that these projects do not affect the integrity and authenticity of the property.

In addition, in January 2021, the State Party informed the World Heritage Centre of a project to build a water tower near the Tomb of Askia, acknowledging that the place intended for this construction would not be visually harmonious with the architectural environment, would likely alter the authenticity of the property and would be incompatible with the interpretation and the historical, cultural and aesthetic values of the property as well as with national legislation. In response to a letter sent to the State Party on 1st February 2021 requesting to suspend the implementation of this project, the State Party responded by letter dated 1st April 2021 confirming the abandonment of this project, pending the identification of a more suitable alternative location for the water tower, which is noted with satisfaction. A new site for this project will therefore have to be designated outside the property and its buffer zone, and the State Party should be requested to keep the World Heritage Centre informed of this project with details of its new location and possible connection works to the city’s drinking water network. This would allow the Advisory Bodies to determine, if applicable, whether the works could affect the Outstanding Universal Value of the property, in accordance with Paragraph 172 of the Operational Guidelines.

The actions carried out to inform and raise awareness in the local community on current and future activities, through messages broadcasted by radio, further motivate their involvement in the safeguarding and promotion actions and are to be applauded. However, the State Party should be encouraged to strengthen its information campaigns in order to alert the local community of certain risks, such as the possible impacts of illegal occupation of the buffer zone by the population.

In view of the particularly precarious security situation in Mali, it is recommended that the Committee decide to maintain the property on the List of World Heritage in Danger, and to continue the application of the Reinforced Monitoring Mechanism for the property. 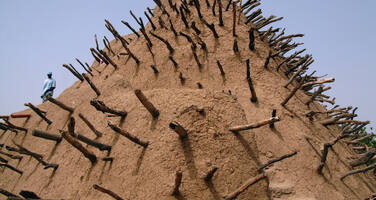