On 18 March 2019, the State Party submitted a state of conservation report, which is available at http://whc.unesco.org/en/list/356/document and provides information relating to the following:

Within the Buffer Zones of the property:

Immediately outside the Buffer Zones:

The State Party also highlighted the continued need for capacity building to enhance national expertise in order to cope with the complex and multidisciplinary issues arising as part of the preservation and management of the historic centre of Samarkand. The 2019 High-Level mission to Shakhrisyabz, Uzbekistan, also conducted a training workshop in Samarkand.

The measures taken over the past two years to enhance legal, human and financial resources for the preservation and management of the property are to be welcomed, as are the start of an inventory for the city and the initiation of a process to develop a new Master Plan and update the existing Management Plan with supporting guidelines such as the ‘Detailed Planning’ and the ‘Development Control’ documents that could provide a much needed framework for the projects proposed.

The above-mentioned tools should be designed by adopting multidisciplinary and participatory approaches to meet the complex requirements of the management and preservation of a living city, following the HUL approach, taking into consideration the evolving needs of its inhabitants and the safeguarding of its heritage values.

In addition to the information provided by the State Party in its report, during the High-Level mission, the State Party indicated that two industrial sites had been cleared in the buffer zone to allow a Convention facility to be constructed on the site for the Shanghai Cooperation Summit, and made reference to the demolition of two other buildings within the property intended for new constructions. These sites were indicated on the map of Samarkand showing the new constructions, which was shared with the World Heritage Centre during the meeting with the State Party in December 2018. However, no details on the demolitions have been submitted to the World Heritage Centre so far, nor documentation of the structures demolished or of sites cleared, nor plans and drawings of the new constructions, nor the HIA for the numerous interventions completed, ongoing, or planned.

The number and variety of major construction projects ongoing and proposed in the city are significant, many moving with speed to meet the deadline of the 2022 event. The plan to construct a variety of infrastructures and tourism facilities are a source of concern, including those required to host the Shanghai Corporation Organization International Summit in 2022 (the locations of which are not yet identified), and the multi-functional project ‘Samarkand City Tourist Zone’, which involves the demolition and re-development of a number of areas within the property, its the buffer zones and beyond.

It appears that the ‘Samarkand City Tourist Zone’ project is largely stimulated by the Shanghai Cooperation Organization International Summit, and the two together may have led to the development of the Master Plan. Therefore, despite the positive move to develop guidelines, a Master Plan, an updated Management Plan and other tools, there is nevertheless concern that, before these tools are completed, major projects will have been implemented and irreversible changes will have occurred within the property and buffer zone that could potentially have an adverse impact on the OUV of the property. Furthermore, the projects in some of these areas involve the re-location of communities on the basis that housing is sub-standard, but no precise details have been provided on the areas nor on social consequences. This fact possibly points out that the constant inspection or established control over housing construction and refurbishment has not been adequately carried out and that systematic processes need to be put in place.

Within the framework of the Master Plan, it is reported that a new draft Traffic Scheme is being developed, favouring new roads outside the historic centre and the further pedestrianization of the centre. This is to be welcomed, as it will replace the 2004 plan that led to a new road being driven through the historic centre and prevent the implementation of further new roads in the property envisaged in the 2004 plan.

It should be noted with regret that, despite the Committee’s requests (Decision 39 COM 7B.73), due process has not been followed in notifying the Committee and the World Heritage Centre prior to any decision being made that would be difficult to reverse regarding a major restoration or new construction which may affect the Outstanding Universal Value (OUV) of the property, in conformity with the Paragraph 172 of the Operational Guidelines.

It is important to recall that the property needs multi-disciplinary planning tools that recognise the need to conserve the OUV, upon which development and tourism planning should be based including the well-being of the local communities, in line with the HUL approach.

As such, the speed and number of the projects proposed and ongoing, the pressure for completion by the deadline of the 2022 Summit, together with the absence of adequate guidelines, regulations, and tools, cumulatively pose a threat to the OUV of the property.

It is recommended that the State Party be requested to provide an in-depth study of the issues listed above as a matter of urgency, given the tight timescale before the Summit, and prior to issuing construction permits. Modifications may need to be considered for those contracts or permits that may be already in place. It is essential that full details of the technical documents and planning tools be thoroughly reviewed and mitigation measures considered for the projects that are ongoing or implemented.  The Master Plan needs to be approved before detailed plans are envisaged for specific areas.

It is therefore recommended that the Committee request the State Party to invite a joint World Heritage Centre/ICOMOS Reactive Monitoring mission at the earliest opportunity, with a view to considering: 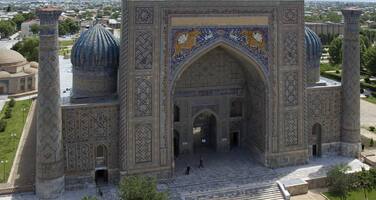