On 30 November 2017, the State Party submitted a state of conservation report followed, on 19 January 2018, by a revised version to correct factual errors, which is available at http://whc.unesco.org/en/list/1484/documents. The State Party notes that the report was drafted after consultation with Local Conservation Councils and takes into consideration advice from national and international members of the Industrial Heritage Expert Committee set up for the property. It was approved by the National Committee of Conservation and Management for the overall serial property and is in line with the Strategic Framework for the property. Progress with the eight recommendations made by the Committee at the time of inscription is presented in the report as follows:

The detailed conservation work programme for Hashima Island was requested at the time of inscription due to the poor state of conservation of this site, which required urgent, large-scale conservation activities and a prioritized work programme. The State Party has developed a 30-year programme – a timescale commensurate with the scope of the work involved – to stabilize the island’s retaining walls, conserve decaying remains, and preserve the battleship form of the island’s silhouette. It is noted that the programme will encompass both attributes of Outstanding Universal Value (OUV) and elements of national and local value, but since some buildings made of wood, steel, and reinforced concrete have collapsed or irreversibly decayed since 1974, further studies are needed to ascertain what can be conserved. Further archaeological studies are also needed, along with more research on historical documents, structural materials and visitor movements. An Action Plan should be developed by Nagasaki City, covering project deadlines, implementation techniques for phased work, and setting annual goals. It is recommended that the Committee commend the State Party for the details provided so far, and request further details on this major conservation project as it develops.

It is noted that visitor numbers for each component site have been monitored since 2016, and a visitor management strategy, including carrying capacities, will be formulated in 2019 on the basis of these results. It is recommended that this strategy be submitted to the World Heritage Centre once it is completed.

An ‘interpretive strategy for the presentation of the property’ was requested by the Committee to allow for an understanding of the ‘full history’ of each component site (see Decision 39 COM 8B.14). Although interpretation has improved since inscription, following an ‘audit by international experts’, more work is planned according to the State Party. In a statement made at the time of inscription, the State Party indicated that “Japan is prepared to take measures that allow an understanding that there were a large number of Koreans and others who were brought against their will and forced to work under harsh conditions in the 1940s at some of the sites, and that, during World War II, the Government of Japan also implemented its policy of requisition. Japan is prepared to incorporate appropriate measures into the interpretive strategy to remember the victims such as the establishment of information centre”.

It is noted that, at all sites, interpretation will reflect the period of greatest contribution to OUV, i.e. 1850s-1910, while at some sites the full history will include pre-1850s information and at others it will go beyond 1910. It appears that more details will be provided at the new Centre. The Committee might wish encourage the State Party to ensure that this phase of the property’s history is acknowledged not only in the new Centre but also at components sites and in digital interpretation.


[1] The World Heritage Committee takes note of the statement made by Japan, as regards the interpretive strategy that allows an understanding of the full history of each site as referred to in paragraph 4.g) of the Decision 39 COM 8B.14, which is contained in the Summary Record of the session (document WHC-15/39.COM/INF.19).


[1] The World Heritage Committee takes note of the statement made by Japan, as regards the interpretive strategy that allows an understanding of the full history of each site as referred to in paragraph 4.g) of the Decision 39 COM 8B.14, which is contained in the Summary Record of the session (document WHC-15/39.COM/INF.19) 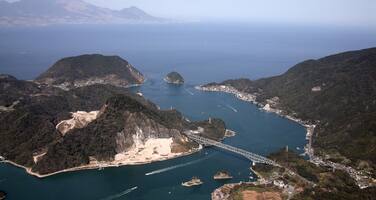